Alberta NDP in better shape as Mason resigns, but far from glory days

There are now two leadership races taking place in the province of Alberta. While Jim Prentice's apparent intention to run for the leadership of the Progressive Conservative Party has made national headlines, Brian Mason's resignation yesterday as leader of the Alberta New Democrats was somewhat quieter. Both leadership vacancies are for parties who have seen better days, but unlike the case of the Tories, Mason is handing the party over to his successor in better shape than it was when he took over.

The chart below shows the electoral results of the Alberta New Democrats going back to their first election in the province under that name. It shows that Brian Mason has been the most successful of the post-1993 leaders of the New Democrats, but was never able to get the party into the same position that Grant Notley and Ray Martin had placed it in the 1980s. 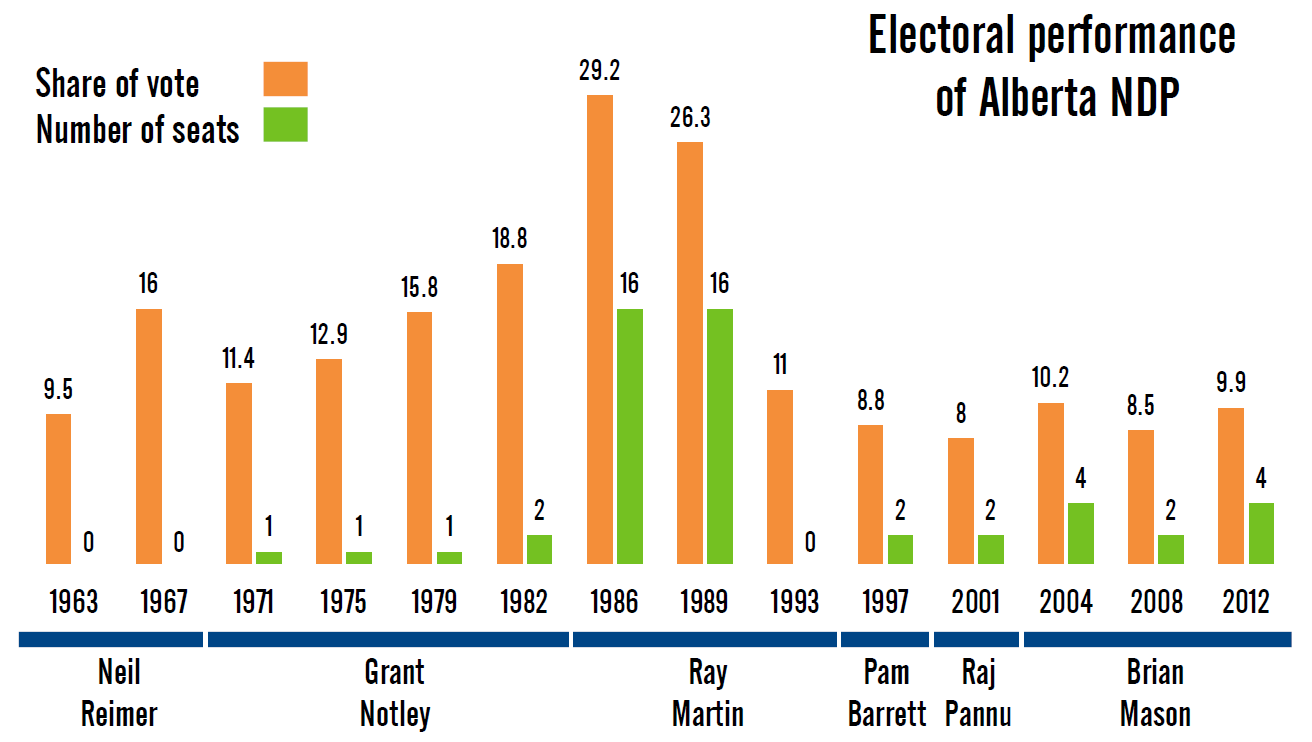 Under the party's first leader, Neil Reimer, the NDP took 9.5% of the vote but was kept out of the legislature in 1963. The NDP's vote share increased to 16% in 1967, but the number of seats won by the party remained at zero.

Grant Notley was not able to improve upon Reimer's 1967 performance in terms of vote share until his fourth and final election in 1982, when he captured 18.8% of the vote and won two seats. Nevertheless, his tenure saw constant improvement for the party. Notley passed away in 1984 in a plane crash (Into the Abyss, by Carol Shaben, gives a good account of the crash and the story of survival of some of its passengers, including PC MLA Larry Shaben, the author's father).

The Alberta New Democrats hit their peak in 1986, when under Ray Martin the NDP captured 29.2% of the vote, won 16 seats, and formed the Official Opposition. Though his vote share dropped to 26.3% in 1989, the NDP did retain their 16 seats and their role in the legislature.

But the results of the 1993 election foreshadowed the pasting that the NDP would receive in the federal election held later that year, as the NDP was shutout of the Legislative Assembly and reduced to just 11% of the vote. The Liberals formed the Official Opposition, coming to within five points of the PCs. Despite the disastrous showing of the NDP, however, that 11% has yet to be surpassed by subsequent leaders Pam Barrett, Raj Pannu, and Brian Mason.

Barret and Pannu were able to win two seats for the party in 1997 and 2001, but in both cases the NDP remained at under 9% support.

Brian Mason's first election in 2004 was the best performance for the party since 1993 in terms of votes and since 1989 in terms of seats. The NDP captured 10.2% of the vote and won four seats. This would be Mason's best performance as leader, however, as the party dipped to 8.5% and two seats in 2008 before improving to 9.9% and four seats in the last election in 2012.

Ranking Mason in the pantheon of Alberta NDP leaders is tricky. Of the six, he ranks fourth in terms of average vote share in elections under his leadership. Martin places first with an average of 22.2%, followed by Notley at 14.7% and Reimer at 12.8%. Mason averaged 9.5%, better than either Barrett's or Pannu's one and only showings.

But in terms of average seat wins, Mason actually ranks second with an average of 3.3 seats per election. That is far behind Martin's average of 10.7 seats, but puts him ahead of Pannu and Barrett at two each, Notley at 1.3, and Reimer at zero. Overall, that would seem to rank Mason as the Alberta NDP's second or third best leader of the last 50 years.

Looking forward, the polls since the 2012 election (while the polls did miss the PC/Wildrose swing, they did measure NDP support accurately) have been better for the New Democrats.

Since the election, the NDP has never registered less than double-digits in any poll, and have generally recorded between 12% and 15% support (on average, the NDP has been at 13.7% in polls carried out since the last election). While this is far from the Martin glory days, it puts the New Democrats back to where they were under Notley in the 1970s.

The New Democrats still have their pocket of support in Edmonton, where the party tends to poll in second or third place. Since the 2012 vote, the party has averaged 21.2% support in the city. This compares quite favourably to the 9.2% support averaged in Calgary and the 12% in the rest of the province.

So the next leader of the Alberta New Democrats should have reasonable hopes to put up the party's best numbers since 1989 in the next election. If the campaign goes well, and Prentice (or whoever takes over the Alberta PCs) fails to turn the governing party around, the NDP could also reasonably hope to win more seats in Edmonton and potentially elsewhere. Some scenarios when Alison Redford was polling at her lowest even suggest the NDP could form the Official Opposition to a Wildrose government.

The next leader of the NDP will need to build a higher profile than Mason, however. Despite leading the party for a decade, Mason still averaged 32% "unsures" on approval rating questions, slightly higher than relative newcomer Raj Sherman of the Liberals (30%) and significantly higher than either Danielle Smith (17%) or Alison Redford (10%). And of those who did have an opinion of him, that opinion was split: 34% approval to 33% disapproval, on average, since the 2012 vote. A new leader who can build more personal popularity may, then, be able to make some significant gains.