Polls clear as mud in Ontario

The Ontario Liberals and Tories are neck-and-neck. Or the Liberals have a wide lead. Or the Tories do. Should we split the difference?

The current aggregate of the polls puts the PCs and Liberals in a tie with 34% apiece, with the New Democrats trailing at 25%. That is probably as clear as it gets in Ontario, as no two recent polls agree on what the situation is in the province.

The chart below shows the province wide results of three polls conducted in Ontario in the last few weeks. All were done within a window stretching from April 7 to April 14, surveying roughly similar numbers of Ontarians but using three different methodologies. 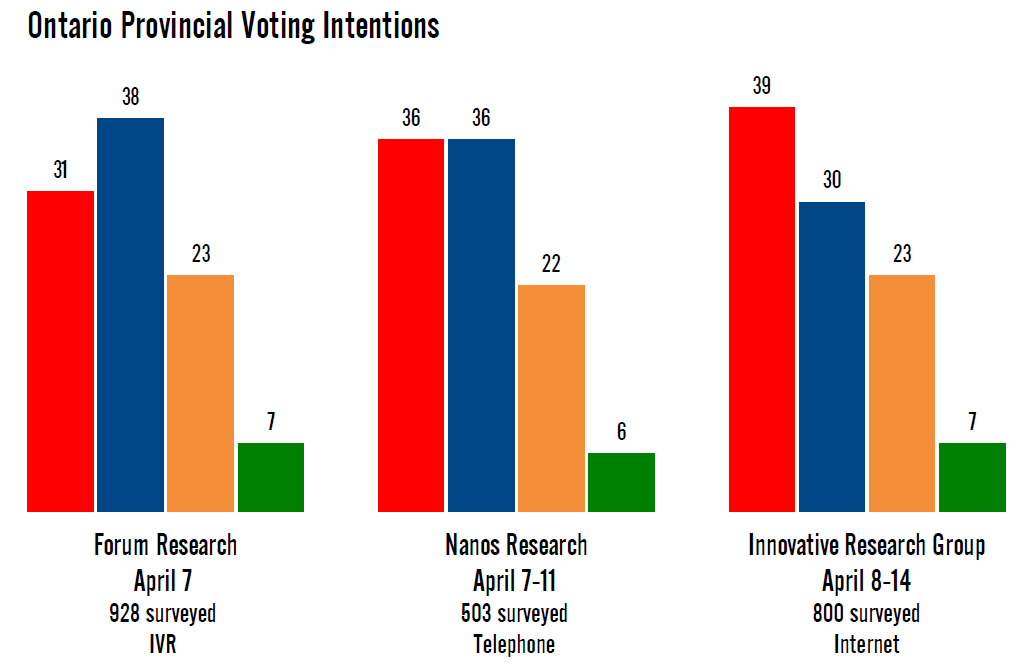 The Forum poll, the earliest of the three, gave the PCs a seven-point lead over the Liberals, with 38% to 31% support.

The Nanos poll, the second of the three but the one released most recently, put the Liberals and Tories in a tie with 36% apiece.

The Innovative poll, the most recent of the three, gave the Liberals a nine-point lead, with 39% to 30% for the Tories.

One might be persuaded to see some progression across these three polls, with the Liberals gaining eight points between April 7 and April 14, all at the expense of the Tories, but that would not be the appropriate conclusion. For one, that is too short of a time span for such a dramatic swing in support. Secondly, different polls conducted by different firms using different methodologies should not be used in that manner. Nevertheless, the three surveys should be in the ballpark.

They aren't even in the ballpark in terms of trends. Nanos has shown a swing from the NDP to the PCs compared with their last survey of Feb. 28-Mar. 3. Innovative has recorded a swing away from the PCs and NDP towards the Liberals since their last poll from March. And Forum has registered a swing from the Liberals to the PCs compared to their poll of March 24.

The one thing the three polls seem to agree on, however, is where the New Democrats stand. All three polls put the NDP at either 22% or 23%, which represents a low-point for the party in the last few months. All three polls also show either stable or negative trends for the NDP, suggesting that Andrea Horwath is not heading into a potential election with any sort of momentum.

But even that is not too clear. The last poll by EKOS Research, out of the field on April 3, just a few days before Nanos and Forum, had the New Democrats at 29% and on the upswing, with the Liberals at 32% and the PCs at just 27%. So if we stretch this string of polls back to EKOS, we then have the Liberals somewhere between 31% and 39%, the PCs between 27% and 38%, and the NDP between 22% and 29%. Got it?

The seat implications for these sort of ranges are enormous. The three most recent polls point to anything from a PC minority government to a Liberal majority.
The seat projection using the Forum poll is the best for the Tories, with 51 seats to 35 for the Liberals and 21 for the NDP. Nanos's results would end up with a similar distribution of seats as currently exists in the Legislative Assembly, with 49 Liberals, 40 PCs, and 18 New Democrats. And the Innovative poll would give the Liberals a majority government of some 59 seats, with the Tories reduced to 27 seats and the NDP winning 21.

The EKOS poll would further confuse things, with 44 seats going to the Liberals and 31 to both the PCs and New Democrats.

Each leader can choose a poll to back-up an election call. Kathleen Wynne would certainly like to see the results from Innovaitve, Tim Hudak would take Forum's poll, while Andrea Horwath would gladly accept EKOS's results. On the other hand, Wynne could be booted from the premier's office according to Forum, Hudak could lose seats according to Innovative (and potentially the Official Opposition role according to EKOS), while Horwath could find herself stripped of influence with a Liberal majority. Who feels lucky?

At the personal level, Wynne and Horwath have better numbers. Innovative did not release any approval or leadership question results, but both Nanos and Forum did. They found somewhat similar results. On who would make the best premier, Wynne stood between 26% (Forum) and 32% (Nanos), while Hudak was second with between 24% (Forum) and 25% (Nanos). That squeezes Horwath out, who managed between 15% (Forum) and 18% (Nanos) support.

On the other hand, Horwath had the highest approval ratings in the Forum poll, at 40% to 34% for Wynne and just 27% for Hudak. A majority of respondents to the Nanos poll felt that both Wynne (54%) and Horwath (53%) had the qualities of a good leader, while just 39% said the same for Hudak.

That makes it difficult for Hudak to bank on a good campaign to propel him to office - his personal numbers are still very low. Horwath, however, may have the most to gain as she is seen the most positively of the three leaders. On the other hand, if the electoral choice becomes one of either Hudak or Wynne, Horwath could see herself shoved aside. Whether to pull the plug on this government will be a difficult call to make for the NDP leader. Predicting the results of this vote may be even harder.
Posted by Éric at 9:04:00 AM