Justin Trudeau has been leader of the Liberal Party for one year now. I wrote about the effect he had on the polls for The Globe and Mail earlier this week. I suggest you check it out if you have a subscription, as I go into the regional details there. Here, this is just a brief look at how the polls have broken down for the last two years.

I also suggest you consider checking out Tapping into the Pulse, my ebook on polling from 2013. It covers the last months of the Liberal leadership race and the first eight months with Trudeau at the helm of the party. The book also covers the wider federal scene, as well as each province individually. You can order it here from Gumroad, Amazon, and Kobo.

For those who want another trip down memory lane, I looked at the polls one year after Thomas Mulcair became leader of the New Democrats for The Hill Times here.

The chart below shows federal support in polls conducted one year since and one year before Trudeau became the Liberal leader. I've used a five-poll rolling average to smooth out the lines as much as possible. I've also added a linear trendline (the dotted, darker lines) to give an idea of how things have moved over the last 24 months. 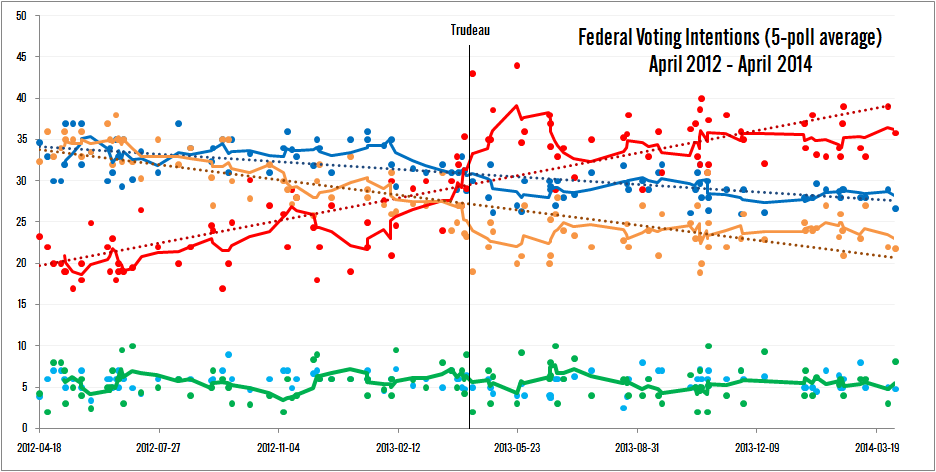 The graph paints a pretty clear picture of the influence Trudeau has had on federal politics. The trendlines for both the Conservatives and New Democrats are negative, though both parties have more or less held steady for the last few months.

Stretching the chart back to April 2012 also allows us to take a look at Mulcair's honeymoon, when the NDP was polling in a tied or ahead of the Conservatives. It also lets us look at where his numbers have gone after two years as leader.

In late 2012, the Liberals were making gains as the leadership campaign rolled on, but you can see that in the months before Trudeau's victory became inevitable the polls were all over the map. This was, in part, because some voters' intentions included Trudeau as leader and others didn't. And Trudeau's quality as a potential leader was still murky at the time.

Since his victory the polls have been less varied, particularly over the last few months. You can see that since the beginning of 2014 the support levels of the three major parties have been relatively tight. Are the numbers stabilizing?

The chart also starkly shows how the Conservatives have not held a clear lead in the polls since over a year ago, and are trailing by a larger margin than they did when the New Democrats were doing so well in the spring and early summer of 2012. Never in the minority years of 2006 to 2011 did the Conservatives trail by such a large margin for such a long time. That the New Democrats have been solidly in third for the last year masks the fact that they have also been solidly over 20% - a level of support that was their ceiling prior to the 2011 breakthrough. Mulcair says it often, and he is right: the party's old ceiling is now their floor.

But the Liberals may be near their ceiling, particularly in this three-way race era. Only a couple of times has the party done better than 40%, the level of support they probably need to be comfortably in majority territory.

So that is the last 24 months in polls. Only 18 months remain before the next election is scheduled to take place. What will this chart look like by then?
Posted by Éric at 1:11:00 PM