Three federals polls have been released over the last few days, all showing the New Democrats narrowly ahead or tied with the Conservatives. Let's go through them one-by-one. 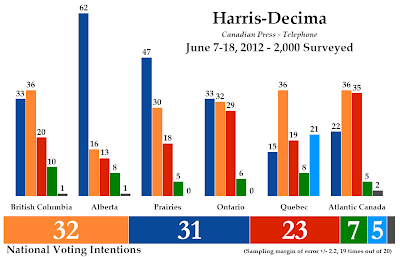 Harris-Decima was last in the field Apr. 26-May 6, and since then the New Democrats have slipped two points to 32%. The Conservatives are up one to 31% while the Liberals are up three to 23%.

The Greens trail with 7% and the Bloc Québécois is at 5% nationally.

The gap is just as narrow between the NDP and Tories among men and women, with the NDP holding a three point advantage among females and the Conservatives holding a two point edge among males.

The narrow gaps in British Columbia and Ontario are important in this poll, as they are the main drivers behind the narrow gap nationwide. 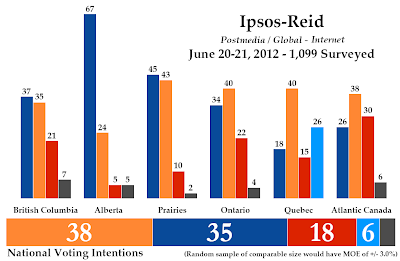 Ipsos-Reid was last in the field May 8-10, and since then the NDP is up three points to 38%, putting them ahead of the Conservatives. The Tories are down two points to 35%, while the Liberals are down one to 18%.

The Bloc has 6% nationally while the Others has 4%. Ipsos-Reid did not separate the Greens from the Others in this survey.

It is worth noting that this poll was conducted online by Ipsos-Reid, while their previous poll had been a hybrid telephone and Internet poll. The methodological difference could be playing a role in the shifts in support between this poll and their last one.

It is also worth noting that the NDP's lead may be somewhat illusory, as it might not turnout in a real election. The Conservatives hold the lead among those aged 35 years or older (those most likely to vote), with 40% to the NDP's 35%.

The big NDP lead in Ontario is the stand-out regional result from this poll, but it has yet to be repeated anywhere else. 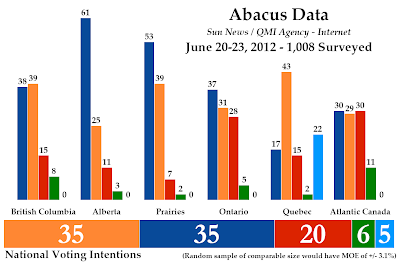 Abacus was last in the field on May 15-16, and since then the Conservatives have dropped two points to 35%, putting them in a tie with the steady NDP. The Liberals are up three points to 20%, while the Greens are at 6% and the Bloc is at 5%.

The Liberals dropped one point to 30% to tie for the lead in that region, while the Bloc is second in Quebec with 22% (-1). 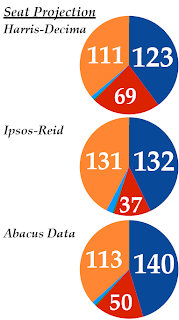 In terms of seats, all of these polls give the Conservatives a plurality. They also give the NDP and the Liberals a combined majority, if they were inclined to work together.

The best poll for the Conservatives is Abacus Data's, as it would deliver 140 seats to 113 for the NDP and 50 for the Liberals. The Bloc would win four and the Greens one. The Conservatives bank on strong performances in the West to hold on to the lead in seats, while the NDP still struggles in Ontario.

The best poll for the New Democrats is Ipsos-Reid's. Their numbers award them 131 seats to 132 for the Conservatives, 37 for the Liberals, seven for the Bloc, and one for the Greens. Here, it is the NDP's stellar result in Ontario that makes the difference, but they would need to be doing better in British Columbia in order to come out on top.

And the best poll for the Liberals is Harris-Decima's, as it gives them 69 seats to 111 for the NDP and 123 for the Conservatives (the remaining five going to the Bloc and Greens). Strong numbers in Atlantic Canada and Ontario give the Liberals most of their seats in this poll.

But that brings us to the Liberal leadership race. Abacus surveyed whether Canadians had a favourable or unfavourable impression of some of the likely (and not so likely) candidates, finding that Justin Trudeau is head and shoulders above the rest: 50% favourable to 28% unfavourable and only 22% unsure.

Next on the list was Marc Garneau, with a split of 33% to 23%. But 44% were unsure, indicating that many Canadians know little about him. That is also the case for two other likely candidates, Gerard Kennedy (62% unsure) and Dominic Leblanc (70% unsure). For what it is worth, neither had positive scores: Kennedy had 18% favourable to 20% unfavourable, while Leblanc split 14% to 16%. 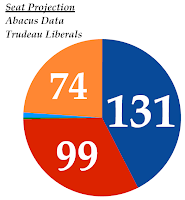 Put Trudeau at the helm of the Liberal Party, and their fortunes improve. They would take 32% of the vote, narrowly behind the Conservatives, who would be at 33% support. The NDP would sink to only 24%, suggesting that their support is remarkably soft.

In terms of seats, the Tories would still come out on top with 131. The Liberals would win 99, however, with 74 going to the NDP. Again, the Liberals and NDP could combine for a majority, though in this case it would be the Liberals calling the shots.

But there is plenty of time yet for Trudeau not to run, to lose if he does run, or to whittle his support down between now and 2015. Nevertheless, this is another demonstration of what Trudeau would do for the Liberal Party. Far from writing them off, he would entice Canadians to give them another look. The fate of the Liberals would then depend on what he would do with that attention.
Posted by Éric at 11:05:00 AM