Ambrose up in Nanos tracking

The weekly rolling poll from Nanos Research often shows shifts within the margin of error from one month to the next, but the latest set of numbers from Nanos shows that interim Conservative leader Rona Ambrose has experienced a statistically significant increase in support.

Note to regular readers: these weekly poll reports can get a little tedious, so I will only write about new Nanos numbers in the future when they are showing a shift that is outside of the margin of error and worth a look. 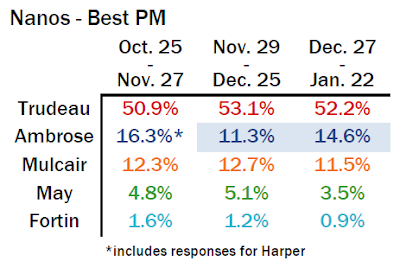 Justin Trudeau still leads on who Canadians prefer for prime minister, and by a huge margin. He scored 52.2%, down slightly from the previous independent sample from Nanos.

Ambrose was up 3.3 points from Nov. 29-Dec. 27 poll to 14.6%, an increase that was outside the margin of error (though not by an enormous amount). It will be interesting to see if Ambrose continues to show growth.

Tom Mulcair was down a little to 11.5%, but has been wobbling back and forth since the election (as has Trudeau).

Elizabeth May was down to 3.5%, the lowest score for the Green Party leader recorded by Nanos since July.

And Rhéal Fortin of the Bloc Québécois — who is a virtual unknown in Quebec — was down again to just 0.9%. Presumably, that would only put him at about 3% to 4% in Quebec. By comparison, at his peak in Nanos's polling Gilles Duceppe managed 10% in the province during the campaign.
Posted by Éric at 9:16:00 AM