The latest federal numbers from Abacus Data show the Liberals continue to be in fine form, though their honeymoon surge at the end of 2015 has dissipated a little. 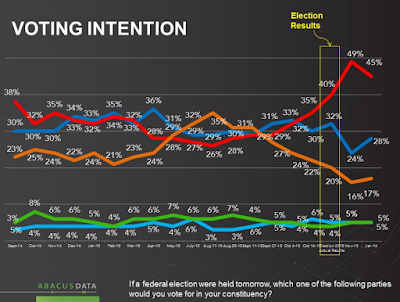 This follows the pattern also recorded by Forum Research since the election — the Liberals down a little from towering heights as the Conservatives recover their base of supporters. The NDP, however, remains at a very low level of support.

In other words, the gains the Liberals have made since the election have come from the NDP. As I've written in a few recent columns for the CBC, that is potentially a sustainable path to a few terms in government for the Liberals as it replicates their numbers from the Jean Chrétien years. It may seem like the NDP is in better form than at that time, but in reality what we're looking at is a lot of Bloc support from the 1990s and early 2000s now in the NDP column. That doesn't hurt the Liberals much at all.

Abacus also has some numbers on the government's approval rating. It remains high, though disapproval is catching up on approval (both are up).

One of the interesting bits from Abacus's polling is the breakdown of where Canadians place themselves on the political spectrum. The Liberals are doing disproportionately well in the centre and on the centre-left, while the Conservatives are doing disproportionately well on the centre-right and right. The NDP is doing best on the left and centre-left, but it does not dominate this part of the spectrum like the other parties dominate theirs.

I asked David Coletto, CEO of Abacus Data, if he could break down each party's support by the left-right spectrum. He obliged: 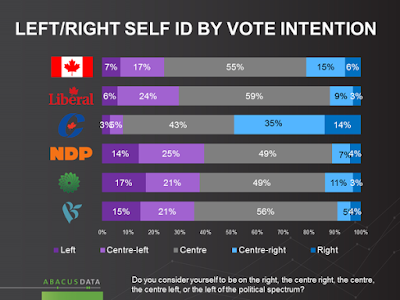 This chart shows just how much of the country is in the centre (or at least thinks it is). But it is also a very revealing look at the make-up of each party.

The Liberals are indeed the 'centrist' party, but they are pulled much more to the left (30%) than they are to the right (12%).

The NDP still has a large portion of supporters considering themselves centrists, but they are pulled to the left more than the Liberals (39%, including 14% who are just on the left).

It shows with numbers what we already know — useful since it backs up conjecture with hard evidence. The Liberals are a centrist party that leans towards the left. The Conservatives are a centre-right party, and the NDP is a centre-left party.

The results for the Greens are illuminating. The Greens are sometimes considered a bit of a centrist party when the environment is left out of things, but their supporters do not seem to agree entirely. The party is clearly centre-left, with the largest portion of people who consider themselves leftists among the five parties. The Greens look a lot more like the NDP than they do the Liberals, though the Greens do have the largest proportion of right-of-centre supporters, by a narrow margin, apart from the Conservatives.

The Bloc is also a centre-left party, sitting somewhere on the spectrum between the Liberals and the NDP. And for all the noise about the niqab, only 9% of Bloc supporters seem themselves as right-of-centre.

Nevertheless, for the Bloc and Greens we're talking about small sample sizes. But it does help us put them on the political spectrum: from left-to-right, this chart suggests the parties should be placed with the NDP first, then the Greens, Bloc, Liberals, and Conservatives.

On an unrelated note, I wrote about a new by-election poll for Oshawa–Whitby here.
Posted by Éric at 9:16:00 AM