The weekly check-in from Nanos Research (expect another 200 or so before the next election) shows no change of significance over the last month.

Justin Trudeau remains in front by a very wide margin, with 52.6% of Canadians choosing him as the best person to be prime minister. Rona Ambrose edged ahead of Tom Mulcair with 12.1% to 11.6%, while Elizabeth May had 4.8%.

While this is the first week-to-week improvement in Ambrose's numbers since she took over the interim leadership of the Conservatives, she is still down from the last independent sample. But none of the leaders have experienced any shift since the previous independent Nanos sample larger than 1.6 points, well within the margin of error. 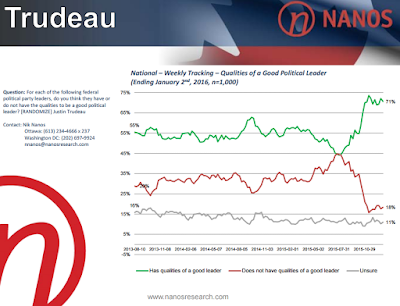 Being prime minister is wearing well on Trudeau, at least so far. Shortly before the election campaign began the country was split on whether Trudeau had the qualities of a good leader. Now, Trudeau is at 71%, and has held steady at around that level since winning the election.

Mulcair stands at 56% on this score, while Ambrose is at 27%. That is primarily because she is still largely unknown (38%), but the number who say she does not have the qualities of a good leader stands at 35%.

One wonders, though, how much the approval ratings of new, low-profile leaders is reflective of the approval rating of the party they lead. Fully 48% of Quebecers think Rhéal Fortin, who is the interim leader of the Bloc Québécois, does not have the qualities of a good leader. That isn't markedly different from the numbers that Daniel Paillé, André Bellavance, Mario Beaulieu, and Gilles Duceppe managed in their brief tenures since 2012. But how many of those 48% of Quebecers have even seen or heard a single thing about Fortin?
Posted by Éric at 9:25:00 AM