Breaking — the weekly rolling poll from Nanos Research still shows Justin Trudeau well ahead on who Canadians prefer to be prime minister.

Considering the slow movement of this four-week rolling poll, I imagine Trudeau will enjoy a sizable lead over his rivals for quite a long time to come. Here are the latest numbers, comparing it only to previous independent samples from Nanos. 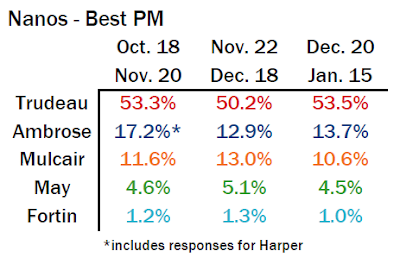 Trudeau led in the poll with 53.5%, no different from where his numbers were the month after the election.

Rona Ambrose was up slightly to 13.7%, while Tom Mulcair was at 10.6%, down from where he was in the previous independent sample.

Elizabeth May and Rhéal Fortin followed with 4.5% and 1%, respectively.

Also, I'm sure this isn't the first time you see this poll, but Mainstreet Research had a national survey out yesterday that included some numbers on the Conservative leadership race. And guess who was nipping at Peter MacKay's heels? Kevin O'Leary! I took a look at the poll here yesterday.
Posted by Éric at 10:27:00 AM