As I plug away at the projection models for Saskatchewan and Manitoba (the three-election system requires a little more work, since some effort at a rough transposition for elections before the last one has to be done), I thought I'd share some of the information I've tallied for the Saskatchewan model.

The model will be a regional one, with breakdowns for Regina, Saskatoon, and the 'rest of Saskatchewan', which is a sadly dismissive name for such a huge area of the province. These regions have been defined as any of the ridings with the name Regina or Saskatoon (or neither, in the case of the RoS), as these mostly align with the boundaries of each city.

Both Regina and Saskatoon have a riding or two that is partly outside and partly inside the city boundaries, but a quick glance at the map suggests that a large proportion of the population in these ridings is within the city limits. Locals may dissuade me of this notion if need be.

Because the model is a three-election system, I've had to calculate the electoral results in these three regions going back to 2003. So let's take a look at them, starting with the capital. 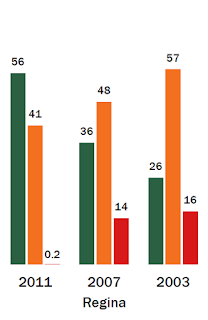 The last time the NDP won an election in Saskatchewan, in 2003, they dominated Regina. They took 56.8% of the vote, with the Saskatchewan Party capturing just 25.6%. The Liberals took 15.9%, finishing closer to the Sask Party than the Sask Party did to the NDP.

The NDP dropped again in 2011, but the Sask Party's big gain in the city (rising to 55.7%) was propelled by the disappearance of the Liberals from the scene — quite literally, as the party offered up just six candidates for the entire province. While the NDP did bleed some votes to the Sask Party, falling to 40.6% (and the Greens, who were up to 3.2%), the scale of Brad Wall's victory here was largely the product of the hole the Liberals left on the political landscape.

The most recent Mainstreet poll, which put the Sask Party at 49%, the NDP at 34%, the Greens at 10%, and the Liberals at 6% among decided voters, suggests that the two smaller parties are making up ground at the expense of the two larger ones. That's bad news for the New Democrats, who desperately need to return to Regina in force. 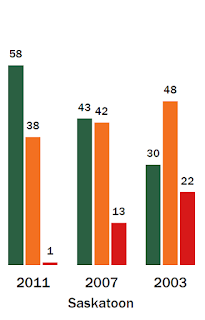 The last Mainstreet poll gives the Sask Party 52% in Saskatoon, with the NDP at 37%, the Liberals at 5%, and the Greens at 2%. This would suggest that here the gains for the Liberals may draw votes away from the Sask Party, rather than the NDP. 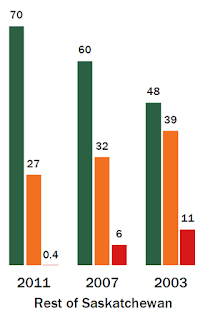 The New Democrats narrowly held onto government in 2003 because they kept things competitive outside of Regina and Saskatoon, winning seats in the north (of course) but also the smaller cities of Prince Albert and Moose Jaw.

But while the NDP held on to a few seats in southern Saskatchewan outside of the two big cities in 2007, they were pushed out entirely in 2011. The Sask Party increased its vote to 69.7% as the NDP fell to 26.7% and the Liberals to just 0.4%. The Greens picked up a point, increasing to 2.7%.

In the Mainstreet poll, the Sask Party led in the region with 66%, with the NDP at 23%, the Liberals at 9%, and the Greens at 1%. The Liberal gain has come at the expense of both the NDP and Sask Party.

As the Liberals will be running a fuller slate this time around (their website lists 29 candidates), the party has the potential to complicate things for the other two parties. But there is no sign in the polls yet that any sort of upheaval is likely to give hope to the NDP or worry to the Sask Party.
Posted by Éric at 8:52:00 AM