The latest sounding of public opinion in Saskatchewan, which holds its election in a little more than three months, shows Brad Wall's Saskatchewan Party to still be in a very strong position.

The poll gives the Sask Party 59% support, up two points from when Mainstreet Research last polled in early October. The New Democrats trailed with 28%, down four points, while the Liberals were unchanged at 7%. The Greens were down slightly to 3%. 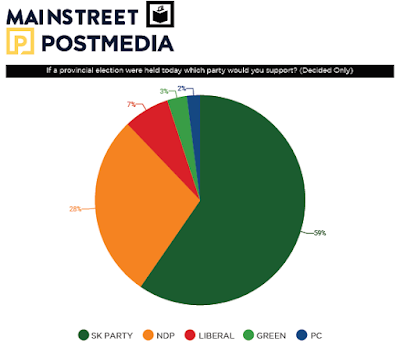 The score for the Liberals is interesting, as the last poll from Insightrix, taken just after the federal election, had the party with double the support. It appears it might have been nothing more than a post-election blip.

Regionally, the race was somewhat closer in Regina and Saskatoon, where the New Democrats had 34% and 37% support, respectively, among decided voters. Nevertheless, the Sask Party was up by 15 points in both cities.

Outside of the two cities, the Sask Party was ahead with 66% to 23% for the NDP. The Liberals were not much of a factor anywhere.

The NDP scored better on some issues than they did on the voting intentions questions, but the Sask Party was still well ahead on all scores. There is little indication that Wall is at any risk.
Posted by Éric at 9:31:00 AM