An interesting poll by Abacus Data for Progress Alberta, a progressive interest group in Alberta, was released this week about the views of Albertans on themselves, their leaders, and some of the policies the new NDP government has put into place.

Where Albertans place themselves on the political spectrum, and where they place other Albertans, is particularly interesting. You can check out the full report from Abacus Data here.

But for our interests, the views Albertans have on the province's party leaders is notable. For one, Rachel Notley is seen as more progressive than the NDP, while Brian Jean is seen as more centrist than the Wildrose party. 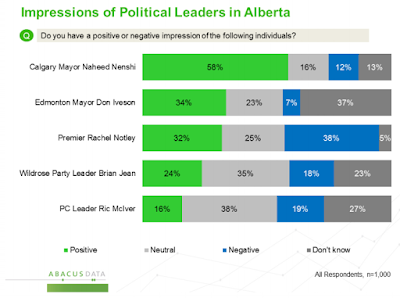 Not terrible numbers for Notley, but the honeymoon does seem to be over. Her best results were in Edmonton, where she had a 43% to 27% split on positive/negative impressions. That worsened to 30% to 36% in Calgary, while between 49% and 57% of Albertans outside of Calgary and Edmonton had negative views of the premier.

Jean is still largely unknown, with 35% saying they have a neutral impression of the Wildrose leader and another 23% being unsure. Of those with a firm opinion, 24% had a positive impression of Jean and 18% had a negative impression.

Ric McIver, interim leader of the Progressive Conservatives (who may be mulling a run for the permanent position), is much more unknown: 65% were either neutral or undecided on him. Another 16% had a positive impression, while 19% had a negative impression.

The poll has some interesting findings on some of the moves the NDP has made, and I encourage you to check out the Abacus report. There are, of course, the caveats that this poll was commissioned by a group with a political point-of-view, and that should be taken into account when reading Progress Alberta's own analysis. But the Abacus report itself is about the numbers, and there some fascinating ones there.
Posted by Éric at 9:33:00 AM