Liberal gains in the Prairies?

On Friday, Nanos Research released their most recent federal polling results, putting the New Democrats marginally ahead of the Conservatives, a first for the pollster. While the Liberals trailed in third, Nanos recorded them making a potentially statistically significant gain in a very unlikely place - the Prairie provinces. 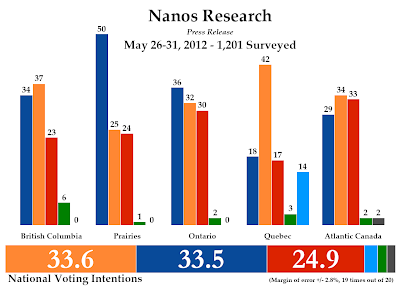 Compared to other polls, those are very low numbers for the Bloc and Greens, and a very high one for the Liberals. That is usually the case with Nanos Research, which tends to score the Bloc and Greens much lower than other firms. But Nanos has one of the better track records of Canada's pollsters, and Green support in particular has usually been over-estimated in other surveys.

Quebec is an interesting result, as the Bloc Québécois usually places second in provincial polling. At 13.9%, they are really at the dregs. But the results in Quebec left 6.8 points on the table, which must be support for "Others". That is unusual. Much of that support should probably be attributed to the Bloc, which would put Nanos's results in the province in line with everyone else.

But the result in the Prairie provinces (Nanos bunches Alberta with Saskatchewan and Manitoba) is more interesting. The Conservatives lead with 50.2%, up 3.5 points, while the New Democrats trail with 24.7%, a drop of 5.7 points since April. Compared to the results of the 2011 election, that puts the NDP up about three points and the Conservatives down around 12 - a significant decrease.

The Liberals placed third with 24.1%, a gain of 8.5 points since April. That is an important number, because the margin of error for the difference between the Liberals' results in the Prairies over the last two polls is 8.5 points. In other words, the Liberals are straddling the line between a statistically significant gain and one that is within the margin of error. Probability being what it is, however, the likelihood that such a dramatic gain is only statistical noise is quite low.

That is not to say that the Liberals have made massive gains over the last six weeks in the three Prairie provinces, merely that they seem to be making some gains. Especially when we consider that, at 24.1%, the Liberals are riding quite a bit higher than their result of 10.7% in Alberta, Saskatchewan, and Manitoba a year ago. For some reason, the Liberals have more than doubled their support on the Prairies. And it isn't just Nanos saying this: if we take their survey out of the aggregate the Liberals are still at 14.4% in the three provinces, a modest gain.

In the larger scheme of things, this apparent increase in Liberal support in this part of the country might be only some mildly interesting trivia. But, it could be something to keep an eye on going forward. Rhetoric has been running high on how Canada's resources should be developed, so the region might be ripe for volatility. 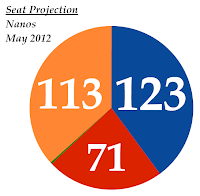 With these levels of support, the Conservatives would eke out a plurality of seats with 123, with the New Democrats winning 113 and the Liberals 71. The Greens would win one seat and the Bloc would be shut-out.

With Liberal support, the NDP could potentially govern in this House of Commons with the command of 184 (185 with Elizabeth May) seats, quite a large majority.

The Conservatives win 16 seats in British Columbia, 25 in Alberta, 17 in the Prairies (Saskatchewan and Manitoba), 49 in Ontario, six in Quebec, nine in Atlantic Canada, and one in the North.

The New Democrats win 13 seats in British Columbia, one in Alberta, six in the Prairies, 26 in Ontario, 59 in Quebec, seven in Atlantic Canada, and one in the North.

The Liberals win six seats in British Columbia, two in Alberta, five in the Prairies, 31 in Ontario, 10 in Quebec, 16 in Atlantic Canada, and one in the North.

With the Liberals doing so well in this poll in the Prairies, it should not be surprising that they can pull seven seats out of the three provinces. Is it likely to actually happen? Probably not. But their strong result in Ontario is quite helpful for the NDP, as it turns a lot of Tory seats over to the Liberals in parts of the province where the New Democrats are not in a good position to defeat the Conservatives.

Nanos's leadership numbers show that Stephen Harper has rebounded from a very rough April, his leadership index score jumping 6.6 points to 72.4 points. Thomas Mulcair dropped 5.6 points to 48.2, while Bob Rae was down 4.3 points to 32.2.

If we convert the points into total share of points, we get Harper at 41%, Mulcair at 27%, Rae at 18%, Elizabeth May at 10%, and Daniel Paillé at 3%. If Nanos had asked respondents who they thought was the best option for Prime Minister, and removed undecideds from that total, I imagine they would have gotten something similar to this.

This poll is a good one for the New Democrats, as Nanos has usually not had the party as high as other firms. That they put them ahead in B.C. and close in Ontario is quite a coup. The numbers are good for the Liberals, but if we look at them only through the context of Nanos's polling they are less impressive. For the Conservatives, Nanos has not had them this low for quite some time, stretching back to mid-2009, judging from their tracking chart. But if we take that even further, we have to go back six years to early 2006 to find where they were routinely scoring this low. That is a long road back.
Posted by Éric at 10:29:00 AM