We are slowly emerging from the polling doldrums of the summer. With only two national polls and one provincial poll (in British Columbia) having been conducted during the month of August, the polling average does not tell us too much. Nevertheless, as after the month of July, I present the August federal polling averages for the sake of continuity. Hopefully, with Parliament returning in September, we will have a more robust set of data with which to work next month. 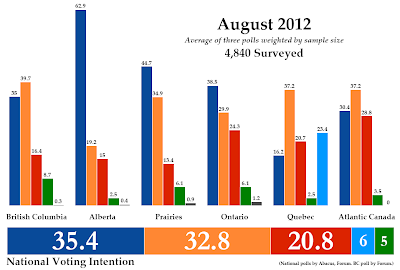 The Conservatives averaged 35.4% support in the month of August, an increase of four points over their July numbers. The New Democrats slipped into second but did pick up 0.2 points, and sat at 32.8% support.

The regional results do not show any major shifts or variations from the July averages, or from the general trends we have been seeing since Thomas Mulcair became leader of the NDP. 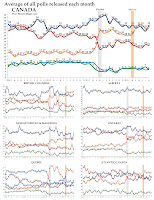 The Conservatives were ahead in Alberta, the Prairies, and Ontario, while the NDP had the edge in British Columbia, Quebec, and Atlantic Canada.

You'll notice I have added a pale orange bar to the monthly federal averages chart, indicating the month in which Mulcair won the NDP leadership race. I will do the same when the Liberals choose their leader.

I have updated the seat projection model to reflect the likely results on the new 338-seat electoral map, using the proposed boundaries. Credit for the transposition of results has to go to the website Pollmaps.ca, and thanks go to Kyle at Blunt Objects for compiling the results into an easy-to-use spreadsheet. With this work seemingly already done (and the numbers of Pollmaps do closely align with the transposition I have already completed), I do not think it will be necessary to continue my analysis of the proposed boundaries. 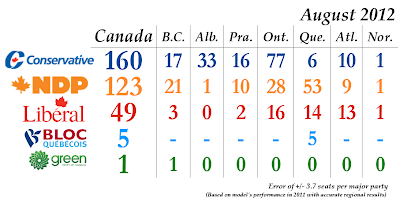 With the August poll averages and the new 338-seat map, the Conservatives would win 160 seats, nine short of a majority government. The New Democrats win 123 seats, the Liberals 49, the Bloc Québécois five, and the Greens one.

The Conservatives rack up big numbers in Alberta (33 of 34 seats) and Ontario, enough to compensate for NDP gains in British Columbia and Saskatchewan, where the new boundaries are particularly helpful for the New Democrats.

It will be interesting to see what kind of results the new map will give if the Conservatives and New Democrats move back into a neck-and-neck race. 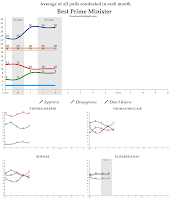 Only one poll had any numbers on approval ratings this month, so there is little to report on that front. Nevertheless, the chart to the right shows how the ratings of the various leaders have been shifting since the spring.

The fall political season in Ottawa begins generally where it left off, with the Conservatives and New Democrats trading the lead and the Liberals still well behind. With the Quebec election now over, it will be worthwhile to keep an eye on how the federal voting intentions of Quebecers will (or won't) shift in the coming months. The Liberal leadership race, slated to begin in earnest in November, will then become the focus both on the Hill and here at ThreeHundredEight. The next federal election is still years away, but there will nevertheless be plenty of things to keep us busy until then.
Posted by Éric at 11:34:00 AM