Liberals move ahead in Nova Scotia

Earlier this month, the Halifax-based Corporate Research Associates released their quarterly polling for the four Atlantic provinces. With Nova Scotia on track for an election as early as next year, the results in this province are particularly important - especially since they show the incumbent New Democrats in trouble. 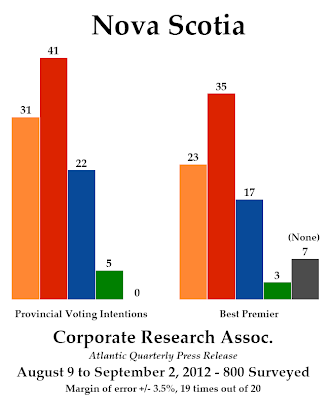 The Corporate Research Associates were last in the field between May 7 and June 4, and since then the Nova Scotia Liberals picked up eight points to lead with 41% support, well ahead of the New Democrats. They were down four points to 31%.

The Progressive Conservatives, at 22%, slipped six points and the Greens were up one point to 5%.

That is a big change in Nova Scotia, as Darrell Dexter's New Democrats have been leading since early 2011. Now is certainly not the time for the NDP to fall behind with an election around the corner.

The New Democrats' drop is within the margin of error, however. The increases and decreases of the Liberals and Tories are not, suggesting that Stephen McNeil is picking the pockets of Jamie Baillie in particular.

McNeil is, by far, the leader seen by Nova Scotians as the best person to be premier. He has 35% support on that score, a gain of eight points. Dexter is unchanged at 23% while Baillie is down four points to 17%. If we just look at the Best Premier numbers as a share of the total (removing the undecideds and "none of the aboves"), we see McNeil at 45%, Dexter at 29%, and Baillie at 22%. In other words, McNeil is a net positive for his party while Dexter is not.

In terms of seats - and using the old electoral map, as a new one is going to be released in the coming weeks - the Liberals would win half of them in the legislature with 26, while the New Democrats would win 21 and the Progressive Conservatives five. If Stephen McNeil could convince an NDP or PC MLA to become Speaker, he would have a workable majority government.

The Tories are shut out of the HRM, but win two in Cape Breton, two in the Valley and the South Shore, and one in the Fundy/Central region.

This is a close enough result that the Liberals could easily win an outright majority, especially with Stephen McNeil's personal numbers besting Dexter's by such a considerable amount. But it is still a very close race, at least in terms of seats. The current map appears to give the New Democrats more resilience than they might deserve considering they trail the Liberals by ten points. It will be interesting to see how the new map changes things, if it all.
Posted by Éric at 10:02:00 AM