The below is an archived post of the Quebec projection page for the 2012 provincial election.

The numbers below reflect the final projection that was made on September 3, 2012 for the general election held the following day. An analysis of how the projection model performed can be found here. 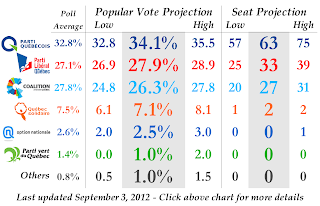 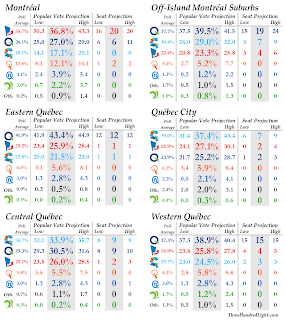 All seat and vote projections are subject to the margins of error of the polls input into the models, as well as to the unpredictable nature of politics at the local level. The degree of uncertainty in the model is laid out by the inclusion of high and low ranges for both the seat and vote projections. These describe the likely range of results, with the actual vote and seat projections reflecting the most likely forecasted outcome. A full accounting of how the vote and seat projection model is designed can be found here and here, respectively.

The Poll Average reflects the unadjusted aggregation of all recent polls. The projection reflects the adjusted result, taking into account past discrepancies between voting intentions and voting results. The seat projections are based on the vote projections, and not the poll averages.

The following is a full account of the polls included in the model and their relative weighting..

The Riding Projections below were the forecasted results in each riding. The high and low ranges included in the projections are especially important, as the degree of uncertainty is far higher at the riding level. Any party whose high result is above the low result of the party projected to win the riding was considered to have a good chance at victory. Riding Projections are not polls and are not a reflection of the actual voting intentions of voters in each individual riding. They are forecasts based on regional trends.

(For best results, right-click and open the riding projection images in new windows or tabs in order to magnify.) 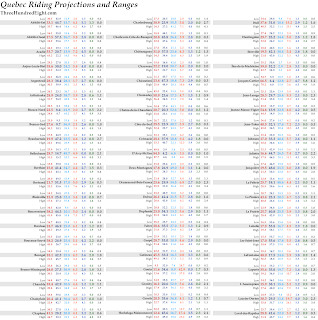 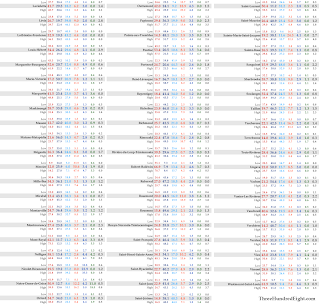 The following chart compares the final results of the election to the final projection. 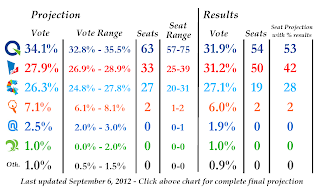 The following charts display how the vote and seat projection ranges changed over time, as well as the final result. 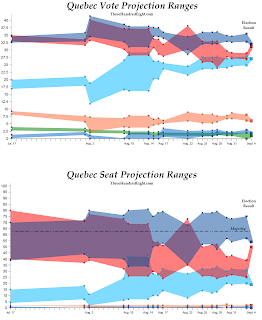 These next charts show how the vote projection itself (the most likely outcome, rather than the ranges) shifted since the first projection of July 17, as well as the final results. 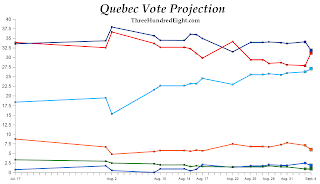 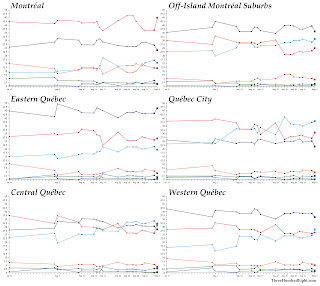 The following average of voting intentions by language was for information-purposes only. They were not used in the seat or vote projection models, and were unadjusted for turnout. 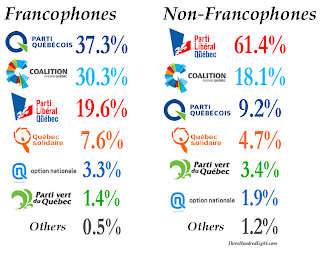 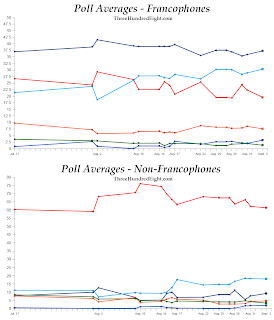 Western Quebec includes the Outaouais, Abitibi-Témiscamingue and the parts of Lanaudière, Laurentides, and Montérégie not within the Montreal metropolitan area. They include the ridings of Abitibi-Ouest, Abitibi-Est, Argenteuil, Berthier, Bertrand, Brome-Missisquoi, Chapleau, Gatineau, Granby, Hull, Huntingdon, Iberville, Joliette, Labelle, Papineau, Pontiac, Richelieu, Rousseau, Rouyn-Noranda-Témiscamingue, Saint-Hyacinthe, Saint-Jean, and Ungava.
Posted by Éric at 9:41:00 AM