Earlier this week, Angus-Reid released its quarterly poll on the approval and disapproval ratings of Canada's provincial premiers (with the exception of Prince Edward Island). Angus-Reid also includes the ratings for the highest scoring opposition leader for each province.

My analysis of the poll for The Huffington Post Canada can be found here.

Angus-Reid was kind enough to provide me with the approval ratings for other opposition leaders. Taken together, this makes a list of 30 leaders. Granted, some of those on the bottom of the list are lesser known leaders with high "Don't Know" scores, but it makes for an interesting nationwide ranking. 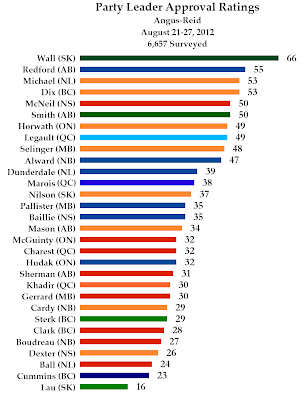 Brad Wall tops the list again, with an approval rating of 66%. Alison Redford is ranked second with 55%, while Greg Selinger ranks ninth with 48%. David Alward sits in 10th spot, followed by Kathy Dunderdale at 11th, Pauline Marois at 12th, Dalton McGuinty at 17th, Christy Clark at 25th, and Darrell Dexter at 27th.

If we look at it in terms of ideology, New Democratic leaders have the best average score with 41%. Conservative leaders (including Wall, Clark, Smith, and Legault) average 36%, while Liberal leaders average 32%. Of course, it isn't quite as simple as that - Smith would bristle at being lumped together with Redford, while Clark, Charest, and Legault are difficult to pin down in terms of where they are on the political spectrum. Generally speaking, though, it would be appear that provincial politicians from the NDP narrowly edge out the Conservatives of various stripes, while the Liberals are not far behind. But each camp has their bears and their bulls.

Hopefully Angus-Reid will provide me with this information when they release their next quarterly poll in December. It will be interesting to see who moves up and who moves down.
Posted by Éric at 2:11:00 PM