If a provincial election were held in Ontario today, there’s no telling who would win. Dalton McGuinty, Tim Hudak, and Andrea Horwath would all have a shot, and not because they are locked in a close three-way race. The polls are just all over the place.
Ontario is the most confusing province in Canada when it comes to voting intentions, as the two firms most active on the provincial scene are in complete disagreement on what is happening and have been for months.

Ontario has been a very difficult province to cover. Forum Research and Nanos Research are both active in the province and they both consistently show completely different results. They both had decent showings in the 2011 provincial election, and there really isn't any other firm active in the province to provide a better idea of who has it right. They are so different that a "somewhere in between" reading of the polls is not very useful.

A poll that was released earlier this week, conducted by Forum for the Broadview Strategy Group, further muddied the waters as it gave the NDP a one-point lead over the Tories (36% to 35%), with the Liberals at only 22%. I generally dislike giving much prominence or credence to polls that are not done for the media or released directly by the polling firm (and Forum has yet to post the details to their website). 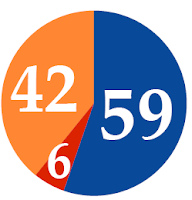 Even here you can see that the New Democrats do not have very good vote efficiency, but it is very difficult to imagine how the Liberals could win 30 seats and form the Official Opposition with only 22%.

All in all, it makes Ontario - or more precisely, the polls being released for Ontario - very frustrating. The legislature being in a minority situation, and thus an election being always just around the corner, I hope the polls will start to align so that we can have a clue as to what is going on.
Posted by Éric at 12:58:00 PM