To inaugurate a new sitting of Parliament, polls by Nanos Research and Harris-Decima were released to a curious public. Depending on how one might want to spin the results, there is something for everyone in these polls - not something you want to see when searching for consistency in polling data. 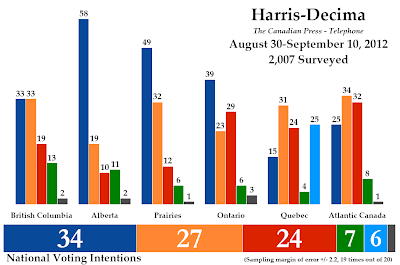 We'll start with the poll by Harris-Decima for The Canadian Press, which was in the field both before and after the poll by Nanos Research.

Harris-Decima's last public poll was conducted between June 7-18 and since then the Conservatives picked up three points to lead with 34%. The New Democrats were down five points to 27%, transforming a one-point edge into a seven-point deficit.

The Liberals were up one point to 24%, while the Greens were unchanged at 7% support.

This is a change of fortunes for the New Democrats. They have not trailed the Conservatives by seven points since Thomas Mulcair became leader of the party at the end of March. The shifts in support for the Tories and the NDP since June are statistically significant, as are the shifts in Ontario. There, the Conservatives were up six points to 39% while the New Democrats dropped nine points to 23%, putting them well behind the Liberals, unchanged at 29%. If that is a true depiction of what is going on in Ontario, the New Democrats are in a lot of trouble.

Shifts elsewhere were within the margin of error. The New Democrats led in Quebec with 31% (-5), followed by the Bloc Québécois at 25% (+4) and the Liberals at 24% (+5). The Tories and NDP were tied in British Columbia with 33% apiece, while the Conservatives led in Alberta and the Prairies. Atlantic Canada is a close race between the New Democrats and the Liberals. 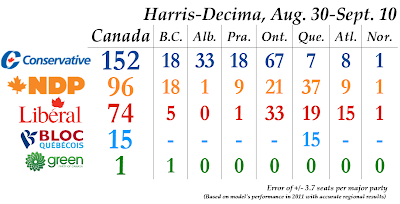 In terms of seats, these numbers would deliver 152 to the Conservatives on the proposed boundaries of the new 338-seat electoral map. The New Democrats would win 96, the Liberals 74, the Bloc 15 (official party status returns) and the Greens one.

The poor showing of the NDP in Ontario is the primary problem for the party in this poll, while their weaker numbers in Quebec open up a swathe of seats to the Liberals and Bloc Québécois. But this poll puts the Conservatives in minority territory, which could be enough to end their time in government. The New Democrats and Liberals could combine for 170 seats, just above the half-way mark. 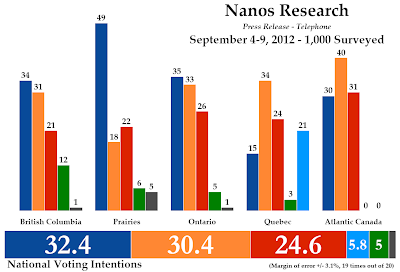 While the Harris-Decima poll points to a wide Conservative lead, the Nanos poll suggests that the Tories and NDP remain in a neck-and-neck contest.

That Conservative edge is statistically insignificant, and none of the shifts in support suggest any real movement. Status quo, in other words, rather than the changing landscape of the Harris-Decima poll.

The only lead of statistical significance in this poll was in the Prairies, which includes Alberta in Nanos's reckoning. That makes it somewhat more difficult to estimate how to distribute support across the three provinces included in the Prairies.

But with Nanos's numbers the Conservatives would win 148 seats to 114 for the New Democrats and 72 for the Liberals. The Bloc Québécois would win only three seats and the Greens just one.

The difference maker for the NDP in this poll is Ontario and Quebec. While this poll does not give a lot more support to the NDP in Quebec than Harris-Decima does, the poorer showing for the Bloc leaves a lot of Quebec seats in the NDP's hands. The Liberals still manage to take a good chunk. Here again, the Conservatives are in minority territory and outnumbered (186) by the NDP and Liberal opposition.

Nanos includes personal ratings for all of the leaders, and the numbers were quite good for Stephen Harper. Despite his party slipping marginally nationwide, his own numbers were up by five points to 28% on "vision for Canada", six points to 29% on trust, and 10 points to 37% on competence. That gave him an overall score of 93.4 points on Nanos's Leadership Index (just the sum total of the percentages on the three qualities), a gain of 20.7 points.

Paillé's numbers in Quebec are problematic for the Bloc Québécois. He trails Harper, Mulcair, and Rae on all three qualities by significant margins. Only 6% of Quebecers consider him the most trustworthy and only 3% think he is the most competent and has the best vision. Mulcair, by contrast, managed 40%, 30%, and 35% on those three factors. What this suggests is that Daniel Paillé is either a complete unknown or a drag on the Bloc's numbers (considering his low visibility, 'unknown' is a safer bet). Gilles Duceppe always did much better in these Nanos polls, and if the Bloc can't improve its leader's reputation they will have no chance of growing beyond their current base.

These two polls tell different stories. Harris-Decima puts the Conservatives firmly in the driver's seat, while Nanos shows the same close race between the two main parties. Conservatives can delight in the seven point lead or the improving personal numbers for their leader. New Democrats can point to their continued resilience in Nanos's poll, while Liberals can rejoice that they are at 24% in Quebec. Even the Bloc can be happy with Harris-Decima's numbers, and the Greens are looking good with 12%-13% in British Columbia.

But other polls haven't been so positive for the Liberals, or so negative for the New Democrats in Quebec. And while the results of the Harris-Decima and Nanos polls are within each's margin of error, the two stories they tell cannot both be true. Either the Tories are comfortably leading or they are not. Until other polls emerge to tell us which is the case, partisans of every stripe have something to gloat over.
Posted by Éric at 9:18:00 AM