Two by-elections are taking place in Ontario today. Dalton McGuinty's Liberals can cobble together a pseudo-majority government if they win both, and it would go a long way towards ensuring the survival of the Ontario government until the end of McGuinty's four-year mandate. The Liberals have a very good chance at winning one of the two by-elections, but the other is truly too close to call.

That by-election is the one in Kitchener-Waterloo. Formerly a safe Progressive Conservative seat under Elizabeth Witmer, Kitchener-Waterloo has transformed into a three-way race where each of the major parties has led in a poll. 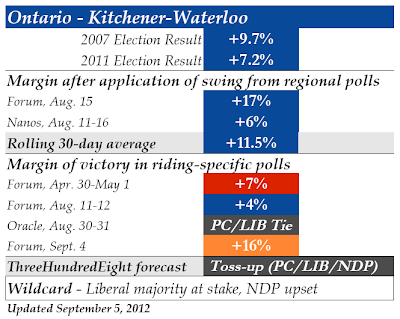 The fundamentals of Kitchener-Waterloo make this riding one that the Progressive Conservatives should win. Witmer won it by respectable margins in 2007 and 2011, and the provincial trends suggest that the Tories should have no problem holding the riding. The party is either steady or up in the polls while the Liberals are down.

But Tracey Weiler will have a tough fight on her hands. The first poll by Forum Research shortly after Witmer's resignation gave the Liberals a seven-point lead. A few months later, Forum gave Weiler a four-point lead and suggested that the New Democrats were making gains. Their last poll, taken only two days ago, put Catherine Fife of the NDP ahead by 16 points!

That doesn't mean Liberal candidate Eric Davis is out of the running. Another poll, this time by Oracle, taken at the end of August put the Liberals and Tories in a tie, with the NDP only four points behind.

Taking the fundamentals of the riding into consideration as well as the riding specific polling, ThreeHundredEight can only forecast that this riding is a toss-up between the Progressive Conservatives (25% to 46%), the Liberals (25% to 38%), and the New Democrats (14% to 39%).

The winner in Kitchener-Waterloo will be the party that gets its voters to the polls. But with the high stakes, this should be a high turnout by-election. Will voters go with the party they have in the past? Will they give McGuinty a majority? Or will they try out the NDP? 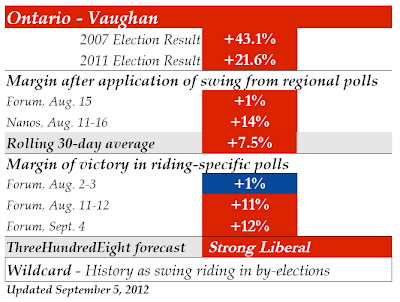 The by-election in Vaughan is much more clear cut. The Liberals have dominated in this riding, winning by more than 40 points in 2007 and 20 points last year. The fundamentals give the Liberals the edge despite their sagging poll numbers, and polls done specifically for the riding have given Liberal candidate Steven Del Duca a double-digit lead over the Tories' Tony Genco. A poll done in early August did give the PCs a one-point advantage, but this was before the candidates for the riding were nominated.

This makes Vaughan a Strong Liberal riding, and one that the Liberals should hold. But Vaughan can swing - it went over to the federal Conservatives in 2010 in a close by-election and then voted strongly for Julian Fantino in 2011. So an upset could always happen, but Vaughan should stay Liberal. The forecast is for the party to take between 40% and 58% of the vote, with the Tories taking between 28% and 39% and the New Democrats between 9% and 15%. 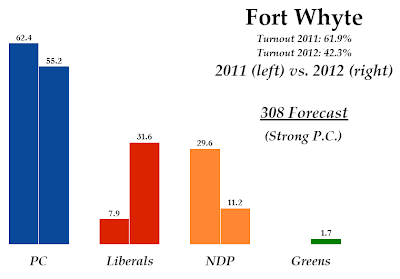 Lost in the hubbub over the Quebec election on Tuesday was a by-election in Manitoba, where Brian Pallister (newly minted leader of the Progressive Conservatives) was making his attempt to enter the Manitoba legislature in place of former leader Hugh McFadyen.

As expected, Palliser easily won the by-election in Fort Whyte with 55.2% of the vote, a small drop of seven points from the 2012 election. He won by 23.6 points, virtually identical to the average margin of 24 points expected by the forecast model.

What was unexpected was the strong performance of the Liberals. Bob Axworthy was a decent candidate for the Liberals and put up a hard fight, while the governing New Democrats held back. As a result, the Liberals made a gain of 23.7 points and finished with 31.6%, a great result for a party that had 7.5% support province-wide in the last election (and 7.9% in Fort Whyte). The New Democrats accordingly dropped 18.4 points to only 11.4%, but considering the circumstances I would not take this as a knock against the government.

What the results do show is that the Liberals are not quite dead yet. If they are seen as the best alternative to the Progressive Conservatives in a riding, Manitobans will vote for them. Will the Liberals be this competitive in Fort Whyte in 2015? Probably not, but they need the little bit of good news more than the New Democrats, safely ensconced in Year 13 of their reign and with a majority government, do.
Posted by Éric at 9:15:00 AM