A new poll was released by Forum Research yesterday for the Toronto Star, suggesting that the Progressive Conservatives and New Democrats are in a close race in Ontario. That leaves Dalton McGuinty's Liberals on the sidelines with only 1 in 5 support. 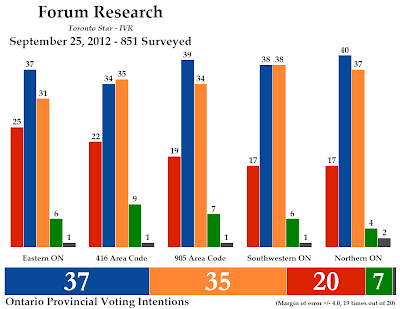 Forum was last in the field in Ontario in a poll released to a media outlet (there was a poll for a consultancy out earlier this month) on Aug. 15, and since then the Tories slipped one point to 37%. The New Democrats, however, were up seven points to 35%. The Liberals were down seven points to only 20%, while the Greens were up one to 7%.

Now, Ontario has been a very confusing province when it comes to polling. Forum is recording a huge shift in support, which is not implausible considering the difficult headlines for the McGuinty government of late. But the other firm active in Ontario, Nanos Research, has been consistently at odds with what Forum has reported. Will the next poll from Nanos show these sort of stellar NDP gains?

The gains and losses for the NDP and Liberals are statistically significant, with the most important shifts in support having taken place in the Greater Toronto Area. There, the Liberals fell 10 points to 20%, with the NDP gaining seven to hit 34%. In the 416 area code, the Liberals were down 15 points to only 22%.

Everywhere in Ontario, the Progressive Conservatives and New Democrats were either tied (southwestern Ontario) or held insignificant leads over the other party (the Tories in eastern Ontario, the 905 area code, and northern Ontario, the NDP in the 416 area code). It would make for a very close election result, with the Liberals shunted off to the side.

And dramatically so. With no pocket of regional strength, the Liberals could only hope to hold on to a handful of seats. The projection model gives them only three, all in Toronto. The Progressive Conservatives win a majority government of 64 seats while the New Democrats win 40.

That two-point edge is rather decisive for the Tories, as the NDP vote in Ontario is pretty inefficient. But the degree of inefficiency that Forum assigns to them is a little ridiculous. Forum's seat projection model would award the Tories 60 seats, the NDP 24, and the Liberals 23. With their own regional results showing the Liberals with no regional concentration of support, it makes very little sense that Forum's model would still give the Liberals that many seats. If the Liberals still had a lot of support in Toronto but had dropped everywhere else, then the sort of result envisioned by Forum could be possible. But with only 22% support in their best region of the province, it just wouldn't happen.

According to Forum, Dalton McGuinty's personal numbers have collapsed. He used to enjoy better approval ratings than the unloved Tim Hudak, but no more. His approval rating dropped nine points to only 20% and his disapproval increased by seven points to 67%. Even among the dwindling number of Liberal supporters his numbers have dropped by six points to 71% approval.

Andrea Horwath's numbers were also rather static, with her approval rating registering 48% and her disapproval rating dropping four points to 23%. Both Hudak and Horwath's net ratings improved slightly (the gap between approval and disapproval shrunk by three points for Hudak, and increased by six points for Horwath), but this seems to be a case of Ontarians turning against McGuinty rather than towards another party or leader.

But as has been the case in the past, it is difficult to know what to believe with this poll. It would not shock me in the slightest if Nanos Research released a new poll showing the New Democrats with less than 25% support and the Liberals and Tories still in a close race. The increase in NDP support has not been replicated at the federal level either, with the exception of a new poll by Environics. Aside from their results, the NDP is still hovering around 30% in the province (including in the most recent federal Forum poll) and hasn't experienced any sort of dramatic leap.

Ontario remains a province to keep a close eye on, but the trends are not exactly clear. The New Democrats have had a good month with their by-election win in Kitchener-Waterloo and the Tories might be benefiting from the Liberals' discomfiture by keeping their heads down. If numbers like these are confirmed in the coming months, the opposition parties might be more emboldened to take the government down in the spring. But the result of such an election could be a surprise.
Posted by Éric at 10:13:00 AM