Dalton McGuinty was not given a majority government last night and Andrea Horwath's NDP made a big breakthrough in Kitchener-Waterloo, as some 80,000 Ontarians voted in two provincial by-elections.

The result in Kitchener-Waterloo was the most anticipated, as a win by the Liberals would have awarded McGuinty enough seats to ensure his government's survival. Instead, Catherine Fife of the New Democrats earned 10,000 more votes than her party received in the 2011 general election in the riding and won. 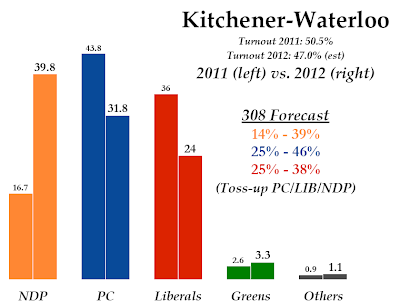 Both the Progressive Conservatives and Liberals suffered. Turnout was high in Kitchener-Waterloo, almost equaling the turnout from the (admittedly very low) turnout from 2011. The Tories under Tracey Weiler finished second with 31.8%, a drop of 12 points and 6,842 votes from October.

Eric Davis of the Liberals saw his vote share drop by 12 points as well and 6,633 votes. This means that Fife was able to draw support from both parties in order to emerge as the winner.

The Greens, at 3.3%, actually increased their vote haul by 208. Not a bad showing for a party that usually does horribly in by-elections.

The final poll by Forum Research suggested that the New Democrats could win this, while ThreeHundredEight's forecast also gave the NDP a shot. It is worth noting, though, that both the New Democrats and Liberals were at the extreme limit of what was expected, suggesting that the NDP did a fantastic job in this by-election campaign - and that the Liberals did very badly. 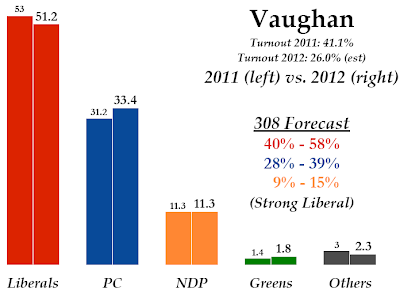 Not so in Vaughan, where voters cast their ballots in about the same way as they did in October.

Steven Del Duca won with 51.2% of the vote, a bare 1.8 points behind Greg Sorbara's performance in last year's election. Tony Genco of the Progressive Conservatives increased his vote share by 2.2 points but, at 33.4%, he was still far behind Del Duca.

The New Democrats replicated their 2011 result with 11.3%. That might appear unremarkable, but it is difficult for a party that will clearly finish third in a by-election to get their voters to the ballot booths. The NDP had an abysmal result in the 2010 federal by-election in this riding, one that was a clear face-off between the Liberal (Genco, actually) and Conservative candidates. That their vote did not tank is a good sign - and the Greens increased their vote share in this riding as well.

This result was forecast both by the polls and ThreeHundredEight, so it went just about as expected. This highlights how the result in Kitchener-Waterloo was very specific to Kitchener-Waterloo. If the Liberal drop and NDP gain in that riding was supposed to be indicative of a provincial trend, then Vaughan should have experienced something similar. It did not.

Nevertheless, the night was a good one for the New Democrats. Their vote held firm in Vaughan and soared in Kitchener-Waterloo. They picked up a seat and were last night's clear winners. The Liberals held on to Vaughan with no significant drop in support, but fell sharply in Kitchener-Waterloo where they had high hopes. It was a mixed night for them. That makes the Progressive Conservatives the party that ended up on the bottom, as they lost one of their 'safe' ridings and made no gains in Vaughan, the kind of riding they will need to win in the next election if they are to form government.

The results of these two by-elections mean that Dalton McGuinty's government could still be defeated at any time. But the results may also extend its tenure, as they give Tim Hudak no reason to pull the plug.
Posted by Éric at 9:13:00 AM