Since the beginning of September, two polls have been released on the provincial situation in British Columbia. Both polls show that the B.C. New Democrats hold a lead of over 20 points, a seemingly insurmountable margin with only eight months to go before the next election. And with the B.C. Liberal government deciding not to call a sitting of the legislature until February 2013, it does not seem like there will be much opportunity for anything to change. 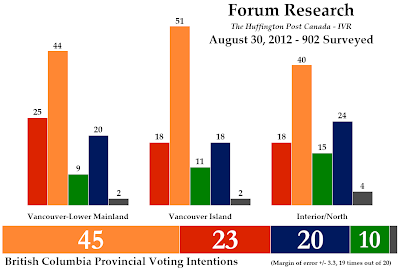 The earlier poll by Forum Research found NDP support to be at 45%, down four points since their previous poll of July 31. The Liberals were unchanged at 23%, while the B.C. Conservatives were up two points to 20%.

The Greens were at 10% while 2% said they would vote for another party.

None of these shifts in support were statistically significant, though the leads that the NDP holds throughout the province certainly are.

The NDP led with 44% in Vancouver and the Lower Mainland, down four points, while they were up two points to 51% on Vancouver Island. The party was down 10 points in the Interior/North, however, to 40%. 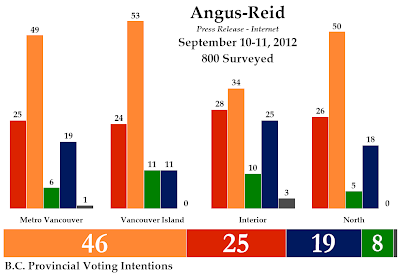 The newer poll by Angus-Reid tells the same general story. Angus-Reid was last in the field between July 30 and Aug. 1, and since then the New Democrats were down three points to 46%. The Liberals were up three points to 25% while the Conservatives were unchanged at 19%.

The Greens were down one point to 8% while 1% of respondents said they would vote for another party or independent candidate.

Despite how the poll was widely reported, the gain for the Liberals is statistically insignificant, suggesting that nothing much has occurred in the province.

While the next set of polls from British Columbia will tell us whether the B.C. Liberals are on an upwards trajectory, the only thing these polls suggest as a potential trend is that the New Democrats may have slipped a little from their 49% of mid-summer. They appear to be down most significantly in the Interior, the only area of the province that appears to be somewhat competitive. 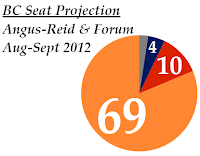 The overall race, however, is far from competitive. The average result of these two similar polls would deliver 69 seats to the B.C. New Democrats, with the B.C. Liberals being reduced to only 10. The B.C. Conservatives win four and two independents would be elected.

The seat projection model for British Columbia is still rudimentary. A new regional model will be launched soon, likely in November.

The two surveys included approval ratings for the leaders and showed similar results.

Christy Clark's approval stands at between 26% and 28%, with her disapproval sitting at between 56% and 62%. Strikingly, those British Columbians who intend to vote for the Liberals are quite loyal to Clark. Her approval rating among Liberal voters is 65%, according to Forum, only marginally lower than the ratings for John Cummins (66%) and Adrian Dix (68%) among their own supporters.

Province-wide, Dix has an approval rating of between 43% and 45%, with a disapproval rating of between 29% and 38%. That is a rather wide spread, with Angus-Reid finding the disapproval rating being higher. The source appears to be those who are not sure - they represent 29% of the population according to Forum but only 16% according to Angus-Reid. That suggests that Dix may have hit a wall in terms of growth potential, since a decrease in "undecided" opinion increases the proportion who disapprove of the NDP leader.

Cummins has a very high unknown factor, at between 33% and 39%. His approval rating sits at between 22% and 23%, while his disapproval rating is between 38% and 45%. Here again, the lower "not sures" in Angus-Reid's poll has the effect of increasing Cummins' disapproval rating. This also occurred for Christy Clark, though to a somewhat lesser degree. We may infer from this that undecideds will be more likely to swing towards the B.C. Liberals, though not significantly.

Based on these numbers, and considering that Dix's NDP has held a wide lead over Clark's Liberals for about as long as time remains before the next election, many of the B.C. Liberals' MLAs will not be working in Victoria in nine months' time. In the end, their break from having to sit in the legislature until February will probably be good practice.
Posted by Éric at 10:39:00 AM