Over the weekend, Léger Marketing released a new poll via Le Devoir and the Montreal Gazette looking at the nationwide federal situation and the on-going Liberal leadership race. The poll shows that Justin Trudeau is still favoured and boosts Liberal support considerably, but that there may be a bit of a downturn in his appeal.

I wrote about what these numbers may mean for The Huffington Post Canada, but here I will go over the numbers in more detail. 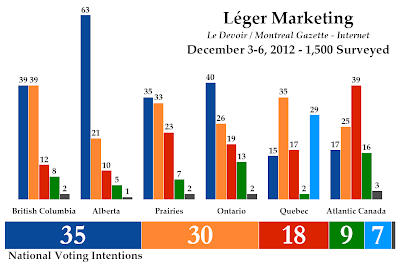 First, the current numbers where Léger asked respondents who they would vote for without any reference to party leaders.

These shifts are not statistically significant but the lead the Tories held over the New Democrats was.
*****
Léger and Le Devoir, CROP and La Presse

A quick note about Léger Marketing and Le Devoir. Both organizations deserve a lot of credit for how they make their data available. Léger always puts their reports on their website very quickly, and Le Devoir goes the extra mile by posting the PDF of the report itself on their own website along with the article covering the poll. This is highly commendable and other media outlets should do the same thing.

This is in sharp contrast to Léger's main competitor in Quebec. CROP often does not post their results on their website. This is because La Presse pays for the poll and so the results are "theirs", but La Presse nevertheless has a public responsibility to make the results available. If Le Devoir and Le Journal de Montréal, which also works with Léger, can do it, so can La Presse.

La Presse should allow CROP to post the details of their polls to their website, if not immediately then at least 24 or 48 hours after the poll is published in the newspaper. At that point, the 'value' of the poll has been completely spent and La Presse loses nothing by allowing CROP to post the details.
*****
The Conservatives led in Ontario with 40%, followed by the NDP at 26% and the Liberals at 19%, down six points since April. The Greens were up four points to 13%, an unusually high result for them.

The Conservatives were in front in the Prairies, where they dropped 14 points to 35%. The NDP trailed with 33% and the Liberals with 23%.

In British Columbia, the New Democrats and Conservatives were tied with 39% apiece, while the Liberals were down 10 points to 12% and the Greens were at 8%.

The New Democrats were ahead in Quebec with 35%, representing a 17-point drop from the 52% that Léger pegged the NDP at in their June Quebec-only poll. The Bloc Québécois was up 11 points to 29%, while the Liberals were at 17% and the Conservatives at 15%.

The Liberals had the edge in Atlantic Canada with 39% (+19), while the NDP was down 24 points to 25%. The Conservatives trailed in third with 17%, a very low result for them, while the Greens were at 16%, a very high result for them. But this is not exactly an anomaly - the Greens were at 15% in Léger's last poll. It would appear that their online panel in Atlantic Canada is somewhat non-representative, and a little unreliable. For example, when Marc Garneau and Martha Hall Findlay were mentioned as potential Liberal leaders support for other parties shot up to 9% and 10% in Atlantic Canada. It may be a good idea to put those numbers aside. 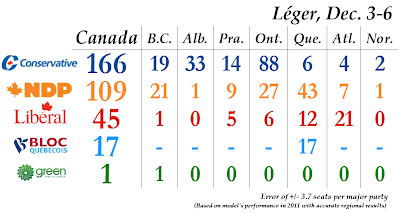 With these results and using the 338-seat proposed electoral map, the Conservatives would win 166 seats, just four short of a majority. The New Democrats would win 109 seats and the Liberals 45, with 17 seats going to the Bloc Québécois and one to the Greens.

This puts the Tories in a stronger minority position than most polls, as the NDP and Liberals would need the support of the Bloc to defeat the Conservatives.

The numbers in this projection are actually quite good for the NDP in the West, but the low result for the Liberals in Ontario delivers a huge amount of seats to the Tories in Ontario. The weakness of the NDP in Quebec also damages their chances of forming government.

But this poll is somewhat out of step with others - not so much in terms of where the NDP and Conservatives stand, but where the Liberals are. Out of the last 15 polls (stretching back to mid-July) before Léger's, the Liberals were pegged at 20% or more in 14 of them. Perhaps Léger is capturing a downward trend in Liberal support - we'll have to see what other polls say.

The elephant in the room is, of course, the Liberal leadership race. Léger asked respondents how they would vote with Trudeau, Garneau, or Hall Findlay as leader. It is difficult to read much into the results, as a lack of name recognition is a factor for Garneau and a major one for Hall Findlay. Half of the population did not know who Hall Findlay was and more than one in four did not recognize Garneau. Nevertheless, the results are interesting. 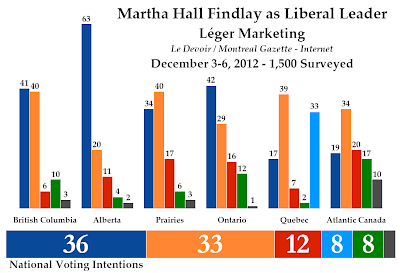 In this scenario, the Liberals drop to 12%, losing their support about equally to the Conservatives and NDP. The collapse of the Liberals is particularly beneficial to the New Democrats in the Prairies, Quebec, and Atlantic Canada, but the Tories take advantage in Ontario. The Bloc also grabs some support and becomes a thorn in the NDP's side in Quebec. 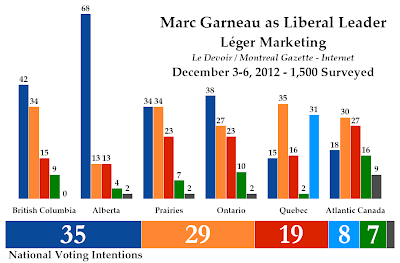 Marc Garneau's numbers are not much different from those that Bob Rae manages on Léger's first question. The only notable differences are in Ontario, where Garneau takes from the Conservatives, and Atlantic Canada, where his leadership pushes supporters to the NDP.

With these results, Garneau looks like a bit of a status quo option. He won't hurt the Liberals but he may not do much better than Michael Ignatieff. However, his name recognition is rather low and he does have good personal approval ratings: 38% of respondents had a good opinion of Garneau against only 8% who had a bad opinion of him. This is understandable as Garneau appears to be a rather unoffensive, uncontroversial option for the Liberals. But that might not exactly galvanize support behind his party in an election campaign. 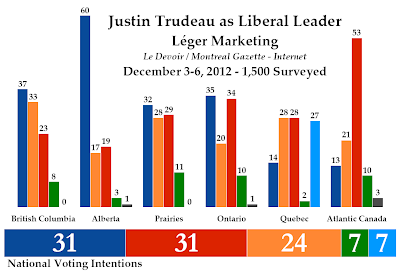 Justin Trudeau, however, does manage to shake things up dramatically. He increases his party's support to 31%, a gain of 13 points coming from the NDP (-6), Conservatives (-4), and Greens (-2). He dominates in Atlantic Canada, ties the NDP in Quebec, and is just a handful of points behind the Conservatives in the Prairies and Ontario.

But hold on - a tie? Forum Research has put the Liberals under Trudeau ahead of the Conservatives by nine points and has given them 39% support. A Harris-Decima poll showed that 42% of respondents were certain or likely to vote for a Trudeau-led Liberal Party (that same poll put Garneau's certain/likely support at 20%, almost identical to Léger's numbers). Have the recent controversies surrounding Trudeau whittled down his support? We will have to wait and see what Forum and Harris-Decima have to say in their next polls, but it appears plausible (and expected). However, the numbers that Trudeau was putting up before were always unrealistic. 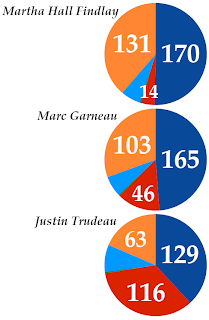 In terms of seats, a collapse of the Liberal Party (as hypothesized by Martha Hall Findlay's results, though it has to be recalled that this assumes an election right now, where more than half of Canadians have never heard of her, rather than an election in 2015 when she would have had two years to introduce herself to Canadians) would benefit both the Tories and NDP. The Conservatives would get a very slim majority with 170 seats to 131 for the NDP. The Liberals would place fourth with 14 seats, behind the Bloc's 22.

Marc Garneau does about as well as the Liberals would do presently, though his weaker numbers in Quebec give the Bloc a few more seats.

Justin Trudeau would win 116 seats on the numbers attributed to him by Léger. The Conservatives would be reduced to 129 and the NDP to 63, while the Bloc Québécois gets their best result at 29 seats (winning the plurality of seats in Quebec). But if they were so inclined, the Liberals and NDP could combine for a majority in the House.

Those seats numbers spell things out quite clearly: Martha Hall Findlay is not well-known and Marc Garneau does not change the game for the Liberals in the way that Justin Trudeau would. It is no surprise, then, that 38% of Canadians chose Trudeau as the best option to lead the Liberal Party, ahead of Garneau (16%), Hall Findlay (3%), and Deborah Coyne (1%). All other candidates were rounded down to 0%. Among Liberals, Trudeau does better: 60% to Garneau's 20%. Hall Findlay manages 2% among Liberal supporters, while Coyne and David Merner get 1% apiece.

A Trudeau leadership was always going to be high-risk/high-reward, and he is still the favourite to win it (according to the data filed with Elections Canada, he is outstripping his rivals in fundraising by leaps and bounds). But this Léger poll could be the first indication that the shine is starting to wear-off. This will be something to keep an eye on over the next few weeks until the leadership race gets rolling with the first debate in January.
Posted by Éric at 10:32:00 AM