Yesterday, Atlantic Canada was all a-flutter with the poll results of Corporate Research Associates' report, a  quarterly tradition on the East Coast. The two provinces furthest away from their next elections (Newfoundland & Labrador and Prince Edward Island) show that the incumbents hold wide leads over their nearest rivals. The poll results led, in part, to the resignation of Olive Crane as leader of the PEI PCs. 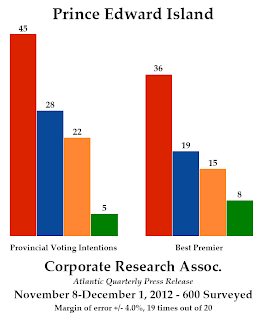 We will start there. CRA was last in the field throughout the month of August, and since then the Liberals picked up three points to hit 45%, well ahead of the Progressive Conservatives. They were down four points to 28%, while the New Democrats were up four points to 22%. Another 5% said they would vote for the Greens, down three points.

Fully 40% of respondents were classified as "undecided, no answer, do not plan to vote, refused to state", which is par for the course in CRA's polling. Thankfully, CRA increased their sample size in PEI from 300 to 600 in this poll, otherwise the sample of decided voters would have had a less useful margin of error of +/- 7.3%.

The Liberals have generally held stable over the last year or so, but they are down eight points from where they were in November 2011. The Tories have also been quite stable, with between 26% and 34% over the last 12 months - as good as a straight line considering the small samples. The New Democrats, however, have been on a steady increase, up from the 9% to 11% they were polling in November 2011 and February 2012. At 22%, the NDP are at their best polling level since at least November 2010, and likely for quite some time before that as well.

But the New Democrats are hard to classify as a major party in PEI. They only ran a half-slate in the 2011 election and were beaten by the Greens. If the NDP runs a full slate in 2015, they could do quite well.

On leadership, Premier Robert Ghiz was up three points to 36% on the Best Premier question, while Crane was down five points to 19%. That is her lowest result for some time, having polled between 22% and 26% over the last year. Likely this had something to do with her decision to step down as leader. She barely did better than new leader Mike Redmond of the NDP.

Satisfaction with Ghiz's government stood at 43% (+3) while dissatisfaction was down two points to 51%. It has to be pointed out that every shift in the polls on every question was within the margin of error, so it is difficult to definitively say whether anything has really changed in the last three months. The longer trends are clearer, however: the Liberals and PCs down a tick to the benefit of the NDP. 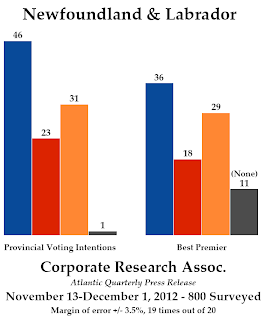 In Newfoundland and Labrador, the governing Progressive Conservatives were up one point to 46%, compared with CRA's last poll in August. The NDP was down two points to 31%, while the Liberals were up one to 23%. Status quo, then.

The PCs have stopped their recent decline, as they were as high as 60% twelve months ago. Things have stabilized, with the NDP polling around 30% since the last election. The Liberals have been slowly increasing their support, however, with 23% tying their best result since February 2011, when Telelink put them at that level.

Kathy Dunderdale was seen as the best option for premier by 36%, while Lorraine Michael was second with 29% and Dwight Ball, interim leader of the NL Liberals, was at 18%. Any shifts from August were within the margin of error, and generally the leadership numbers have followed the same trends as have the voting intentions.

Satisfaction with the government was rated at 58%, unchanged since August, while dissatisfaction was up three points to 37%. 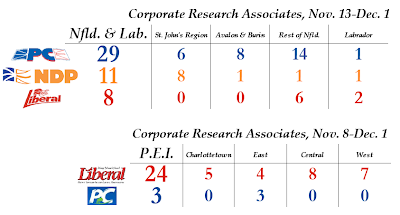 In terms of seats, both Dunderdale and Ghiz would win another majority government on these numbers.

In PEI, the Liberals would win 24 seats to three for the PCs, with all of those Tory seats being won in the eastern part of the island.

In Newfoundland and Labrador, the Tories would win 29 seats to 11 for the NDP and eight for the Liberals, meaning that Michael would head-up the Official Opposition.

The Tories would win seats in every part of the province, while the NDP would be heavily concentrated in and around St. John's and the Liberals in the central and western parts of the island and in Labrador.

The thing to watch in Prince Edward Island is whether the New Democrats are really going to maintain this level of support and be able to run a full slate of candidates. One suspects that these polling numbers would help them find another 26 names to put on the ballot beside Redmond's. If that does occur, the fallout would be a little unpredictable, as the NDP has never been a real factor in PEI.

The NDP is also worth watching in Newfoundland and Labrador, as they have improved upon their 2011 election result and have maintained that support for almost a year. The Liberals aren't going away either, and could be revitalized after they choose their new leader. Dunderdale still has a wide advantage but that could slip away in the midst of a campaign. If the Liberals continue to pick-up support, a minority government in Newfoundland and Labrador in 2015 is not unthinkable.
Posted by Éric at 10:14:00 AM