An Abacus Data poll on the voting intentions of Ontarians shows that the Progressive Conservatives are still in front, with the New Democrats and Liberals tussling for runner-up status. The poll also gauged the Ontario Liberal leadership race, an exercise that drew a blank from most respondents. 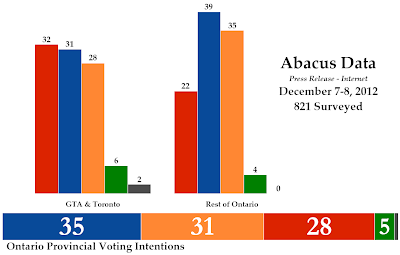 This is Abacus Data's first poll of the Ontario provincial scene since the 2011 election (in which they performed quite well). The poll gave the PCs 35% to 31% for the New Democrats and 28% for the Liberals, with the Greens at 5% support.

Compared to the last election, the Tories were unchanged but the Liberals were down 10 points. Eight of those went to the New Democrats and two to the Greens. This aligns with how the poll breaks down past voting: the Liberals have lost about 20% of their 2011 support to the NDP, while only a very small portion (4%) have gone to the Tories.

It is worth noting how complete Abacus Data's report is for this poll. The report shows both unweighted and weighted sample sizes and decided and undecided results. This is exactly how every poll should be reported. It shows that, despite being an online poll, the number of corrections that needed to be made to the sample were relatively minimal. This isn't about double-checking a pollster's work, though - it is about being able to be confident in the results. When a polling firm is transparent, their work tends to be better and their polls are often more accurate.

Also, providing the detailed breakdown of undecided opinion gives us a better understanding of what is going on behind the numbers. For example, it shows that half of those who did not vote in 2011 and two-thirds of those who can't remember if they voted are currently undecided. That means that a large proportion of those who are undecided are highly unlikely to vote in the next election anyway. It also, quite intuitively, shows that Liberal voters are about twice as likely to be undecided as supporters of the PCs and NDP, perhaps because these voters are waiting to see how the leadership race plays out. This would suggest that the next leader of the party has a good chance of improving the party's numbers, but also that the choice the party makes could send more of their 2011 supporters to other parties.

The poll showed the Progressive Conservatives ahead by seven points among men and the NDP four points among women, with the New Democrats in front among voters 29 or younger and the Tories ahead among those 45 or older. Ontarians between the ages of 30 and 44 were split three-ways between the parties.

With these numbers, the Progressive Conservatives would win 43 seats to 33 for the Liberals and 31 for the New Democrats.

The Liberals were able to win more seats with fewer votes than the NDP due to their incumbency advantage, which makes the difference in several close races (often PC-Liberal contests). But the margin is close enough that either the Liberals or the NDP could emerge as the second-place party with the results of this poll.

Abacus's assessment of the Liberal leadership race falls in line with what other surveys have shown. Gerard Kennedy is the most well-known and liked, while Kathleen Wynne and Sandra Pupatello also score better than the others.

But the real story of this poll is suggested by the yawning gap between the favourable and unfavourable impressions of each of the candidates.

Even though Kennedy has the highest name recognition, 31% of respondents still did not know who he was or were unsure of their opinion of him, while another 31% had a neutral impression (more suggestive of not knowing much about him than anything else). Wynne and Pupatello combined for 72% and 74%, respectively, on the unknown/neutral score, while all others were at or over 80%.

The winner of the race will have their work cut out for them in order to become better known but also in ensuring that those neutral opinions don't become unfavourable. These numbers do suggest, however, that Kennedy, Wynne, and Pupatello would come out of the starting blocks in the best position.

The canyon narrows a little among Ontarians who voted for the Liberals in 2011, but nevertheless the number of respondents marked as "unknown" in Abacus's polling is still at around 40% for all candidates except the top three. Kennedy has very good name recognition among Liberal supporters, with only 19% marked as "unknown". His 44% favourable impression rating is also well ahead of Wynne (25%) and Pupatello (22%). Of note is that Harinder Takhar scores the highest unfavourable impressions among Liberal voters and Ontarians as a whole.

While Kennedy might have the highest favour among voters, he does not seem to have the same sort of organization as Wynne or Pupatello. That could be a deciding factor in a delegated convention. If an election is called shortly after the leadership race comes to a close, however, neither Wynne nor Pupatello would have the sort of immediate impact that Kennedy would have, at least according to these numbers. That could complicate matters for the Liberals, unless Wynne or Pupatello (or one of the other candidates) turn out to be strong campaigners.

The Liberals need a bump if they are to move definitively ahead of the NDP and out of third place. The Liberals are almost certainly in third spot, as they have been ranked behind the New Democrats in 11 of the last 14 polls (the current aggregation puts them at 27.9% to the NDP's 29.2%). The Progressive Conservatives, meanwhile, have been rock solid at between 32% and 38% in the last 17 polls stretching back to March. The challenge the next Liberal leader faces is twofold: regaining those lost voters who have swung to the NDP and chipping away at the Tories' granite base. No easy task.
Posted by Éric at 9:06:00 AM