Liberals lead in Nova Scotia, but is it enough?

Earlier this week, the Corporate Research Associates released their quarterly poll on Atlantic Canadian politics, showing two very interesting races in Nova Scotia and New Brunswick. In both provinces, the governing parties are either tied are trailing the Official Opposition by a wide margin. This is especially problematic in Nova Scotia, where an election is expected some time in 2013.

As I've already done an analysis of these polls for The Huffington Post Canada here, I invite you to read that article. I'll quickly go over the numbers here before getting to the seat projections. 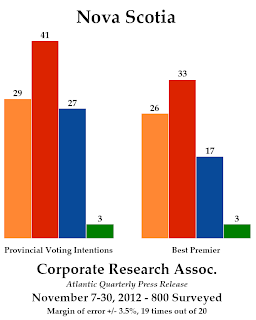 CRA was last in the field in August, and since then the Liberals have been unchanged at 41%. The New Democrats were down two points to 29% while the Progressive Conservatives were up five points to 27%. The Greens were down two to 3%. None of these shifts appear to be statistically significant, though the lead the Liberals enjoy over the NDP is.

While the gap widened between the Liberals and the NDP, it narrowed between Stephen McNeil and Premier Darrell Dexter. On who would make the best premier, McNeil dropped two points to 33% while Dexter picked up three points to hit 26%. Jamie Baillie of the Tories was unchanged at 17%.

But is the Liberal lead enough to give them a majority government? Maybe not. More on that in a moment. 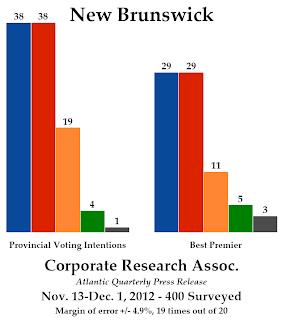 New Brunswick is scheduled to go to the polls in 2014, so the numbers are less urgent. Since CRA's last poll, the governing PCs have been unchanged at 38%, but the Liberals were up six points to 38% after electing their new leader, Brian Gallant. The New Democrats were down five points to 19% while the Greens were down two to 4%.

Note that this is the smallest sample of CRA's four provincial polls, and when you take the undecideds out of the equation the margin of error becomes quite large. The significance of Gallant's gain may be nothing but a statistical wobble. CRA's next poll in three months will tell us whether that is the case or not.

Gallant's numbers improved dramatically over those of interim leader Victor Boudreau: they jumped 11 points to 29%, tying with Premier David Alward (down four points). Dominic Cardy of the NDP was down four points to 11%.

But the Progressive Conservatives seem to hold the advantage, as they would still win a slim majority government with a tie in the vote. It is difficult to say this with great confidence however, as there is no regional data available. The swing is being applied province-wide.

The Tories win 29 seats to 22 for the Liberals and four for the NDP. The PCs win seats in every part of the province, with the southwest (Saint John and surrounding areas) being their strongest. The Liberals win 15 of their 22 seats in the northeast and southeast (Moncton), while winning a slew of seats in Fredericton. The New Democrats win their seats in the northeast corner of the province and in Saint John.

The situation in Nova Scotia is also more favourable than it should be for the incumbent government. Despite trailing by 12 points, the New Democrats would still be capable of limiting the Liberals to a minority government of 24 seats to 20 for Dexter's NDP and eight for the Tories.

A few caveats, however. Again, this projection is being made without regional data and the boundaries are those that were in force in 2009. But the incumbency effect is important for the NDP as several ridings are very, very close - a few are even three-way races where third is separated from first by two or three points.

One of the biggest problems for the Liberals with this poll is the performance of the Progressive Conservatives. Almost half of the seats won by the Tories in this projection are Liberal-PC contests. In another five seats won by the New Democrats, the NDP and Liberals are almost neck-and-neck but the Tories have a large share of the vote. In effect, there is a vote-split among the opposition that chips away at the Liberals' chances of winning a majority outright. A lot of ridings are rather close, though, so if these were the numbers heading into election night the Liberals could still pull it off.

But while the Liberals' main rival is of course the NDP government, they may have more to gain by pushing support for the Progressive Conservatives back down. In fact, they had a better seat result in CRA's last poll when the NDP was at 31% and the Tories were at 22%. The Liberals need to hold at least a 10-point lead over the NDP in order to have good chances at winning a majority, but if the PCs start pushing 25% or more than even a double-digit advantage may not be enough.
Posted by Éric at 9:44:00 AM