NDP drops in EKOS polling, but...

Yesterday, EKOS Research released its newest federal poll via iPolitics.ca, showing the Conservatives with a wide lead over the New Democrats and Liberals. The survey results are not without their eccentricities, however, and paint a very different picture in Quebec than another poll released over the weekend by CROP via La Presse/Le Soleil. 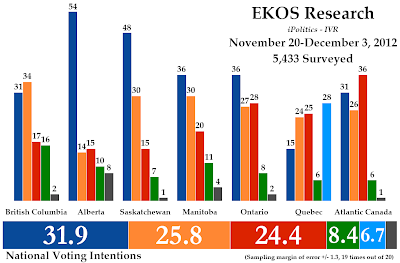 This 25.8% is the lowest the New Democrats have scored in any poll since Thomas Mulcair became leader of the party. Any extreme result will always raise a few alarm bells, but EKOS was in the field primarily in November when the NDP was not polling very well so these numbers may not be too out-of-step.

The 2.8% for the other parties is a little high, though, and this is something of a feature of EKOS polling of late. The average result for other parties, when reported at all, has been 1.2% in polls by all other firms since the May 2011 election. The average for EKOS has been 2.5%, or more than twice other firms, and in the last election other parties received only 0.9% support. EKOS's IVR method may be partly to blame, as respondents punch in "other" rather than "undecided" or some similar response. But Forum Research, which is the other major firm using IVR, usually does not have high "other" results. It could be that Forum is applying some weighting to their polls or making corrections to reduce their "other" percentages where EKOS is not, but there is little reason to suspect that almost 3% of Canadians would vote for a fringe or independent candidate.

The Conservatives held an even wider lead in this poll among men, 13.5 points up on the Liberals. The NDP was narrowly ahead among women, holding a 1.3-point edge over the Tories. The New Democrats led among voters younger than 25, while the Conservatives were ahead among Canadians 25 or older.

Because EKOS assembled a very large sample, they were able to break the results in the Prairies down. This showed that the Conservatives held a lead in Saskatchewan with 47.8%, followed by the NDP at 29.8% and the Liberals at 14.6%. Compared to the election, this represents an 8.5-point drop for the Tories, a 2.5-point reduction for the NDP, and a gain of six points for the Liberals.

The Conservatives were also ahead (but the lead was within the margin of error) in Manitoba with 35.7%, down almost 18 points since the election. The NDP was up four points to 29.8% and the Liberals were up 3.4 points to 20%.

The Bloc Québécois had the advantage in Quebec with 27.7%, a gain of 6.9 points since EKOS's last poll. The Liberals were up nine points to 25.4%, while the NDP was down 15 points to 24.1%. That is the worst showing for the NDP since February, stretching back 62 polls. The Conservatives were well behind with 14.7%. 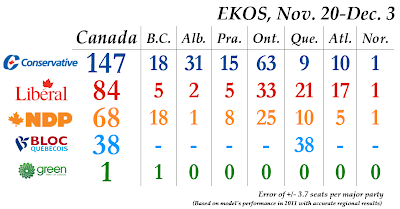 With the numbers from EKOS's poll and using the proposed boundaries of the 338-seat map, the Conservatives would win 147 seats to 84 for the Liberals, 68 for the NDP, 38 for the Bloc, and one for the Greens.

The big anomaly in this poll is in Quebec. Because the NDP's support was very uniform in the province, placing third means they move behind in a lot of seats. They lose out to the Liberals in Montreal and to the Bloc outside of Montreal, often by narrow margins. The Conservatives are also able to move ahead in a few seats due to the NDP's drop. In fact, these sort of numbers result in a lot of odd projections with parties winning seats with a lot less than 30% of the vote.

But it is hard to argue that this is what is currently the situation in Quebec. A poll by CROP released over the weekend showed a very different situation, with the New Democrats still in full control. 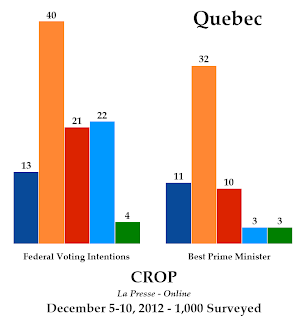 CROP was last in the field in Quebec Nov. 14-19, putting their last two polls just before and after EKOS's. In those two polls, CROP had the New Democrats at 41% and 40%, making it difficult to reconcile with the 24% EKOS captured in between. Perhaps CROP is the odd-man-out here, though, as the four polls in Quebec prior to CROP's November missive had the NDP at between 30% and 34%. In fact, CROP is the only pollster in the last 18 polls (stretching back to August) that has put the NDP at 40% in the province.

CROP put the Bloc at 22%, up six points since their November poll, and the Liberals at 21%, up four points. They put the Tories down 10 points to 13%, but their previous result of 23% was certainly an outlier.

It muddies the water a little bit, and makes me want to lean more heavily on the aggregation. That currently situates the NDP at a little over 33% in Quebec, making EKOS a low result and CROP a high one. 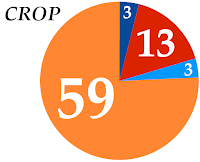 In terms of seats, and using the 78-seat map, the New Democrats would win 59 of them and continue their dominance of the province. The Liberals would make big inroads, though, with 13 seats to three apiece for the Conservatives and Bloc Québécois. The difference between these two polls is starkly portrayed here: either 10 or 59 seats for the NDP and either 3 or 38 for the Bloc. That isn't exactly a clear picture.

Altogether, though, there are a few things that we can learn from the EKOS and CROP polls. It is clear that the Conservatives are leading nationwide, and that the New Democrats are trailing in second. Virtually every poll has shown that to be the case for months. Quebec is in flux but the NDP is still well positioned, as they are in British Columbia. The Conservatives still lead in Alberta and the Prairies, while their margin in Ontario has been reduced but not fatally so. Atlantic Canada could be flipping back to the Liberals again.

Focusing on the individual results of the EKOS poll - or any poll - is to miss the forest for the trees: the wider trends are not put into question by EKOS's national poll. Rather, they provide more evidence to back them up. For the most part, it puts us back to where we were when 2011 was coming to a close.
Posted by Éric at 9:38:00 AM