A new poll by Ipsos-Reid was released last night, nudging the projection in the B.C. Liberals' favour by a small degree. The poll, which put the gap between the Liberals and the New Democrats at 13 points, results in the forecast now giving the NDP a 91.7% chance of winning the popular vote on May 14, down from the 95.7% chance forecasted as of Nov. 21. In other words, the odds of a victory by Christy Clark have been reduced from 20 to 1 to about 10 to 1.

But the projected support for the New Democrats has hardly moved at all, dropping 0.2 points to 48.5% and two seats to 60, still well above the 43 needed for a majority. In fact, the current seat projection range (50 to 71 seats) still puts the NDP entirely in majority territory. This is part of the reason why, if an election had been held Nov. 30, the New Democrats would still have had a 97.6% chance of winning it outright.

The Liberals picked up 3.4 points in the projection and now stand at 33.1% and 24 seats, but their high projected seat range of 34 still puts them only as the Official Opposition. The forecasted vote range, however, now overlaps with the New Democrats', at 46.1% forecasted high for the Liberals to a 44.5% forecasted low for the NDP.

The New Democrats and Liberals are the only two parties likely to be represented in the legislature, as the Conservatives are no longer considered in play in any ridings. Their forecasted high has dropped from 23 to 13 seats, even under a best case scenario. Their support has dropped 2.3 points to 10.5% in the projection. The Greens are also down by 0.9 points to 6.1%. 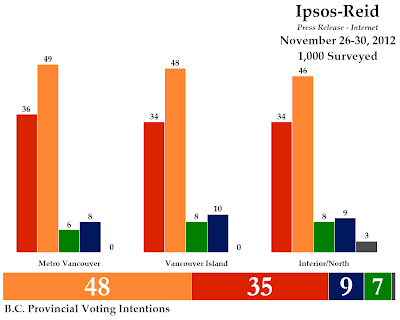 As to the Ipsos-Reid poll itself, the firm was last in the field Sept. 11-18 and since then the New Democrats were down one point to 48%, still giving them a wide lead over the Liberals. They were up three points to 35%, while the Conservatives were down three points to 9% (a statistically significant slip). The Greens were up one to 7%.

The recent Angus-Reid poll shows a similar trend. It was in the field about a week before Ipsos-Reid's, and they also had a poll from early September (Sept. 10-11). Their shifts over that period but the NDP up one, the Liberals up four, and the Conservatives down seven points. It is clear that the Liberals are making gains entirely on the backs of the Conservatives. This is good for them in the sense that it puts the Liberals closer to the NDP, but even if every Conservative voter swings to the Liberals the New Democrats would still hold a four-point edge in the polling.

But there are some odd demographic variations in the numbers. The Liberals actually hold a two-point advantage among men but trail among women by 29 points. That is enormous. The New Democrats also hold a wide lead (54% to 37%) among voters aged 55 and older - a cohort that turns out in big numbers.

Not all is bad news for Clark, however. Some 59% of the people still consider the economy to be in good or very good shape, and 46% think the province is headed strongly or somewhat in the right direction (42% think it is headed the other way). While those are good fundamentals for Clark and the Liberals, the party still trails the NDP by a wide margin and Clark herself polls very poorly at a personal level.

For example, Adrian Dix is chosen as the best person to be Premier by 39% (+4 since Ipsos's last poll) while Clark is chosen by 23%. If we take the undecideds and "none of the aboves" out of the equation, however, Dix's numbers improve to 54% to 32% for Clark. This suggests that Clark is dragging down the Liberals' vote while Dix has the potential to pull it up.

Their relative approval ratings also indicate that Dix is a net positive for his party. His approval rating stands at 53% (+2) with 34% disapproving of him. That is almost the mirror image of Clark's numbers: 34% approval to 59% disapproval. Of more concern for Clark should be the proportion who strongly disapprove of her: 35%, compared to only 17% for Dix. And Dix has 16% who strongly approve of him, compared to only 5% for Clark.

Note that I have added a tracking chart with a rolling average for leaders' scores on Best Premier and approval ratings to the B.C. projection page.

But Clark seems to be out of the woods in terms of being swamped by John Cummins of the Conservatives. Only 7% chose him as the best person to be Premier and his approval rating plummeted 10 points to only 13%, with his disapproval soaring 11 points to 51%. Fully 30%, or almost one-in-three British Columbians, strongly disapprove of him. Cummins might have been a good fall back option if Clark stumbled on the campaign trail, but he is becoming somewhat toxic for his party (though the party itself might share in the blame as well).

The odds of an NDP landslide are diminishing and the race could become a lot closer, particularly if the Conservative vote continues to drop. But there is not much time left for Clark to make this a truly competitive race.
Posted by Éric at 11:11:00 AM