Abacus puts gap between Conservatives and NDP at two points

The latest poll by Abacus Data for Sun Media shows that the New Democrats are keeping it close in the race with the Conservatives, as the Liberals remain mired in third place.

With a particular focus on the personal numbers of Stephen Harper and Thomas Mulcair, I analyzed the poll for The Huffington Post Canada in today's article. Here, I'll focus on the voting intentions numbers in the poll. 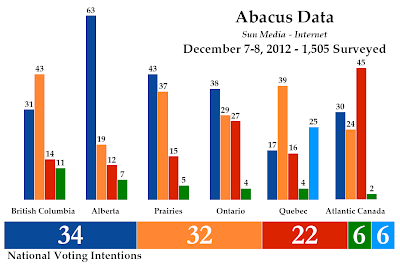 Abacus was last in the field Nov. 9-11, and since then the Conservatives dropped two points to 34% support, while the New Democrats were up three points to 32%. In addition to the gap between the two parties, neither of these shifts in support appear statistically significant.

The Liberals were unchanged at 22%, as were the Greens at 6%.

A few notes on methodology and reporting. Kudos to Abacus Data for including their unweighted regional sample sizes in their poll report, which puts them in rare company (Ipsos-Reid is the only other pollster who does so, though they go the extra mile by including the unweighted samples for other demographic breakdowns). Abacus uses an online panel for their polling, but it isn't mentioned in their report whose panel it is. We can safely assume it is Angus-Reid's, however, though Abacus designs its own survey and weighs the data according to their own parameters.

It also needs to be pointed out that Abacus over-sampled Ontario (821 in all, rather than the 320 or so that would have normally been polled) and gave the province an appropriate weighting in the national percentages. This gives the Ontario numbers a much smaller margin of error than they usually would have in a poll of 1,505 Canadians, but the other regions' results have the sort of margin of error that would normally apply in a national poll of 1,000 - assuming a random sample, of course.

The New Democrats led in Quebec with 39%, one of their higher recent results. They were up nine points since Abacus's last survey. The Bloc Québécois trailed with 25%, with the Conservatives at 17% and the Liberals at 16%. That is a low result for them, compared to other recent polls. Are the Liberals faltering in Quebec? This is the second consecutive poll to put them at below 20% support, after the eight previous polls put them over 20%. Something to keep an eye on.

The New Democrats were also ahead in British Columbia with 43%, their highest result in any poll in the province since June. The Conservatives trailed with 31% while the Liberals were at 14% and the Greens at 11%.

In Atlantic Canada, the Liberals were in front with 45%, a gain of 14 points since Abacus's last poll. This is actually an extraordinary, and likely outlier, result for the Liberals as we have to go back 137 polls to find a better number (in early April 2011). The Conservatives were second with 30% while the NDP had 24%, their lowest result in the last 45 surveys of the region. The results in Atlantic Canada, then, may not be worth very much, as is usually the case considering the small sample size. 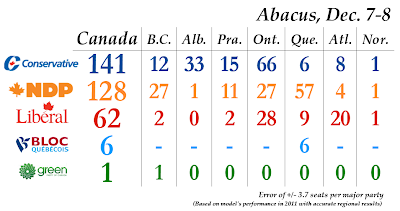 With these numbers, and using the proposed boundaries of the 338-seat map, the Conservatives would win 141 seats. The New Democrats would fall just short with 128, while the Liberals would win 62, the Bloc six, and the Greens one.

This is one of the better results for the NDP we've seen, and demonstrates a much higher vote-efficiency than is usually the case. This is in large part because of two provinces: British Columbia and Quebec. Keeping close to 60 of Quebec's seats is essential for the NDP, while a strong showing in British Columbia and, to a lesser extent, the Prairies is also very important. If the NDP could do a little better in Ontario and with more plausible results in Atlantic Canada, a plurality of seats is clearly possible with little movement in the numbers.

That should be of great concern to the Conservatives, who normally have a bit of insulation in the numbers due to their dominance out west. Losing this many seats in B.C. and the Prairies, and taking less than 70 in Ontario, puts them in grave danger. A few shifts in the numbers due to polling error and a few variations in the seat projection due to its own inherent error, and you have the Tories winning fewer seats than the New Democrats (or a few more, of course).

But it has to be recognized that this poll, and the poll by Léger Marketing released over the weekend, is a little out of step with the consensus. Or, at least, the consensus from November when the Liberals were in a close fight for second. Have the Liberals really taken a hit over the last month or are methodological issues to blame for the discrepancy? We'll need more data to find out.
Posted by Éric at 10:28:00 AM