Two polls from Léger Marketing (for Le Devoir) and CROP (for La Presse) were released on the weekend, showing the Parti Québécois with a wide lead over the Liberals and the Coalition Avenir Québec. In fact, both polls show the two main opposition parties in a tie. But while both also put the PQ in majority territory, it is only by a hair in the one by Léger. 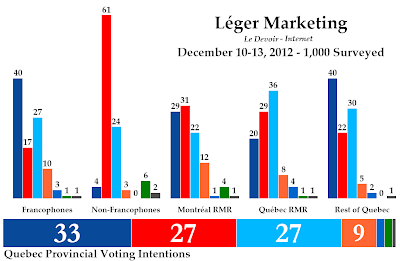 Léger was last in the field Nov. 21-22 and since then the PQ remained unchanged at 33% support. The Liberals and CAQ were tied for second with 27% apiece, representing a five-point gain for the CAQ and a four-point loss for the Liberals.

Québec Solidaire was up one point to 9% while Option Nationale was down two points to 2%. The Greens and other parties were unchanged at 2% and 1% each. 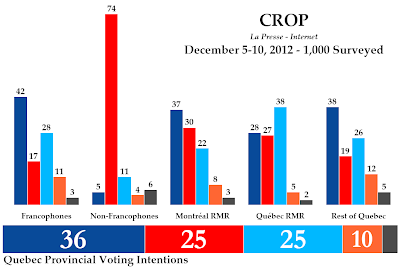 CROP showed some similarities to the Léger poll, but also some important differences.

The firm last conducted its routine 1,000-sample poll between Nov. 14-19, and since then the Parti Québécois picked up one point to hit 36% support. The Liberals were down two points to 25% while the CAQ was down four points, also to 25%.

Québec Solidaire was up four points to 10% while support for other parties (including ON and the Greens) was up one to 4%.

The main difference between these two polls is the result for the Parti Québécois. Though a three-point spread (33% to 36%) is not of much concern due to the different field dates and the inevitable sampling error, it does mean the difference between a six-point margin and an 11-point one. Aside from random variation in the polling, the cause could be the question asked: Léger listed the parties without their leaders, while CROP mentioned the names of the party leaders.

This brings two factors into play. Firstly, interim Liberal leader Jean-Marc Fournier is not as well known as either Pauline Marois or François Legault. The Léger poll showed that 52% of Quebecers did not know who Fournier was or had no opinion of him (more on that later). That score was 24% for Legault and only 13% for Marois. Secondly, it makes respondents consider their voting intentions as of right now, which means with Fournier as Liberal leader. Respondents to the Léger poll might not be taking into account Fournier's leadership, instead thinking of the party generically or considering someone like Philippe Couillard as the leader (which is the most likely outcome of the leadership race).

Nevertheless, the difference between the two polls is not enormous and, if they both had completely random samples, within the margin of error. What they have in common might be more important - both polls show the CAQ and Liberals in a tie, with the PQ ahead. Both polls show the PQ relatively stable and the Liberals slipping. Both polls show Québec Solidaire around 9% or 10% support and trending upwards. Both polls put the PQ at 40% to 42% among francophones with the CAQ in second at 27% or 28% and the Liberals with 17% among this linguistic group. Those are some significant similarities. 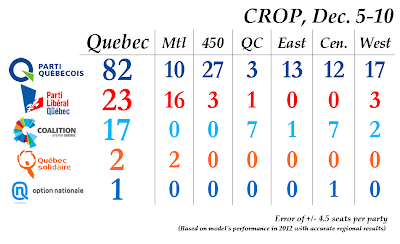 In terms of seats, the CROP poll would deliver a big majority to the PQ with 82 seats to 23 for the Liberals, 17 for the CAQ, two for QS, and one for Option Nationale.

The PQ would win its majority primarily in the suburbs around the island of Montreal, with 27 seats to only three for the Liberals. The PQ's dominance in the regions of Quebec is also felt here.

Léger's numbers would deliver the smallest of majorities to the PQ with only 63 seats. The Liberals would win 35, the CAQ 23, and Québec Solidaire four. Presumably, the PQ's majority could be made somewhat more comfortable with the support of QS.

Interestingly, this is a far different result from the projection for Léger's last poll, when the PQ held only a two-point edge over the Liberals. How can a wider lead result in a closer seat result? The answer is in the performance of the CAQ. Léger's last poll had the CAQ at only 22%. This made it much easier for the PQ to win a lot of seats north and south of Montreal. In a two-horse race with the Liberals, the PQ's advantage among francophones is crushing. But when the race becomes closer and the CAQ is over one-in-four support, the PQ's edge among francophones diminishes. This gives the Liberals a chance in closer races and puts the CAQ in a position to win seats from the PQ as well.

Pauline Marois's real foe in the National Assembly is thus François Legault. She has much more to gain by winning votes back from the CAQ rather than from the Liberals. According to the CROP poll, Legault is seen as the best person to be premier by 24% of Quebecers, compared to 23% who chose Marois. Françoise David of Québec Solidaire came up third with 10%, ahead of Jean-Marc Fournier's 9%.

Marois's numbers have held relatively stable on this question, but Legault's are on the rise. He was at 18% in CROP's poll in October and 22% in their November poll. Meanwhile, satisfaction with the PQ's government appears to be trending downwards: around 43% in November to 39% in CROP's poll. It has dropped from 37% to 32% in Léger's polling.

Support for sovereignty is relatively steady, however. CROP had it at 34% and 35% in their two November polls. This survey has it at 38%. That is an uptick, but it has been wavering back and forth around 38% for sometime, and this could just be a move back towards the mean.

Léger's poll included their bi-yearly "barometer" of Quebec's political leaders. The results of the top 25 figures, in terms of the best "good opinion" scores and colour-coded by party affiliation, are as follows: 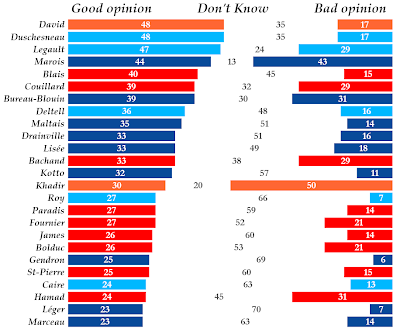 (Blais was a former TV personality, which explains some of her popularity).

Also high on the list was Philippe Couillard (39% good to 29% bad) and Raymond Bachand (33% good to 23% bad), the two front runners for the Liberal leadership. Interim leader Jean-Marc Fournier was further down the list, with 27% expressing a good opinion of him and 21% a bad one.

Also of note on the list are Amir Khadir, who had the highest bad opinion score with 50%, and Nicolas Marceau, Minister of Finance. He had 23% good opinion to 14% bad, with 63% still unaware of who he is or unable to form an opinion about him.

In terms of the biggest winners, David's good opinion score increased by 23 points since Léger's last poll in June, while Marceau's was up 15 points and Marois's 10 points.

By party, Marois (89%) was the most popular among PQ supporters, followed by Léo Bureau-Blouin (71%) and David (66%). Only Couillard (54%) and Bachand (52%) had majority good-opinion among Liberal voters. Legault (85%), Duchesneau (70%), and the last leader of the ADQ, Gérard Deltell (66%) were the most favoured among CAQ supporters. Nothing unexpected here, but the ambiguous feelings towards the two men most likely to take over the PLQ leadership by their own supporters is certainly not a vote of confidence.

It is difficult to see much incentive for the CAQ and Liberals to pull the plug on the PQ in the spring. Though the CAQ's numbers are holding strong and François Legault's own ratings are moving in the right direction, it is not unusual for a third party to gain favour when then main opposition is distracted by a leadership race (for a recent example, see Bob Rae). The CAQ's numbers may drop when Couillard (or Bachand) becomes leader, but the Liberals will then have a long way to go among francophones if they have any hope of defeating the PQ in the next election - and the Charbonneau Commission is not going away anytime soon. Despite her relatively flaccid numbers, these factors may ensure Marois's tenure as premier continues through to at least the fall of 2013.
Posted by Éric at 3:20:00 PM