Yesterday, the Toronto Star reported the results of a new Innovative Research poll taken after the OLP convention showing the Liberals narrowly edging out the Progressive Conservatives and New Democrats in Ontario. With a small sample, the results of the poll are far from definitive - but it does have a few interesting nuggets.

I wrote about the poll for The Huffington Post Canada and I invite you to read the article, as I will just quickly go over the basic numbers here. I also invite you to take a look at the poll report itself, as it contains a lot of information on other interesting questions. 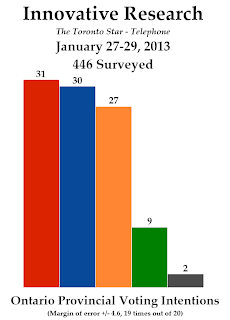 Before jumping to the conclusion that Kathleen Wynne is boosting Liberal fortunes, it has to be noted that Innovative appears to have been polling regularly (but releasing sparsely, those hoarders) and that the numbers for the Liberals and Tories have actually decreased since December, while the numbers for the NDP have increased. But with a margin of error of almost five points, we really can't see much about what this poll is showing, other than an effective three-way tie (generally what other polls have shown as well).

More interesting are the numbers on who is the best person to be premier: Wynne gets 24% to 18% for Tim Hudak and 13% for Andrea Horwath. That is a big drop since December, when Horwath was leading on this question with 21% to 20% for Hudak and only 19% for Dalton McGuinty. So, by this measure, we can say that Wynne looks to have improved matters for the Liberals to the detriment of the NDP.

With these provincial numbers, the Liberals could eke out another minority government with 45 seats. The Tories would be almost shut out of the Toronto area and win 34, while the New Democrats would take 27 seats. Not shown on the graph is one seat for the Greens. With 9%, or three times their score in 2011, the Greens could potentially win at least one seat, but I suspect that number is inflated (as is often the case with the Greens).

And they're off. If these kinds of numbers are backed up by some other polls, the appetite that the Tories and the NDP might have for an election could drop significantly. It is worth noting that since Wynne's leadership victory, the tone from the press gallery at Queen's Park has been more about an election in the fall or even the spring of 2014, rather than the snap election almost everyone assumed would occur if Sandra Pupatello had taken the leadership. The reaction that Hudak and Horwath will have to Wynne's throne speech will be interesting to see.
Posted by Éric at 10:40:00 AM