I had a thought a little while ago, and asked David Coletto at Abacus Data whether he had ever considered running a poll that would mimic a preferential ballot. He thought it was a good idea, so last week he added it to his regular polling. And he provided me with the results.

I wrote about them for The Globe and Mail. I'm going to go over some of the results here, but the main pieces of information gleaned from the poll are presented in the article.

A little bit about the methodology: Abacus asked respondents to rank seven parties from 1 to 7, adding the Christian Heritage, Libertarian, and Pirate parties to the mix to provide a little variety, and to see whether anyone would rank these parties highly if given the chance.

Unfortunately, respondents were not given the option to stop ranking the parties at any point, which is what a preferential ballot does allow. 'Second choice' polling suggests that Conservative supporters are most likely to say that they have no second choice. However, this should have little effect on the seat distributions I calculated with the preferential ballot, as in only 83 of 338 ridings did the Conservative candidate drop-off the ballot before the 50% threshold was reached - and 53 of those were in Quebec, where Conservatives are probably less likely to not have a second choice.

The Globe article has the national breakdown of how supporters of each party would rank their ballots, but since I have unlimited room here let's go through the results region-by-region. Note that, outside of Ontario and Quebec (and even in those two provinces to some extent), the samples for each party are quite small. I have not included the Greens in some of the regional breakdowns below because it was based on 10 or fewer respondents. 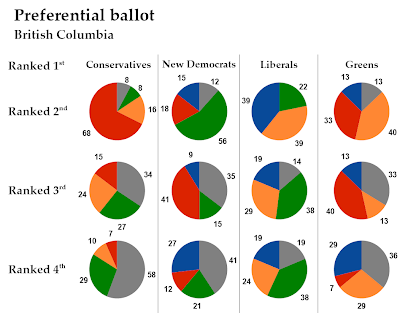 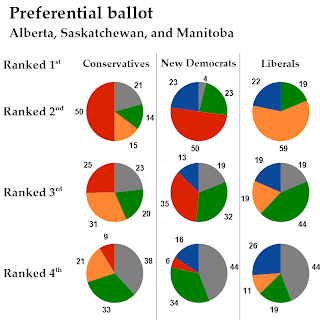 In Alberta and the Prairies (I combined them as the samples were just too small), the Liberals are the consensus second choice for New Democrats, while Liberals are more likely to go to the NDP as their second choice than they are in British Columbia. 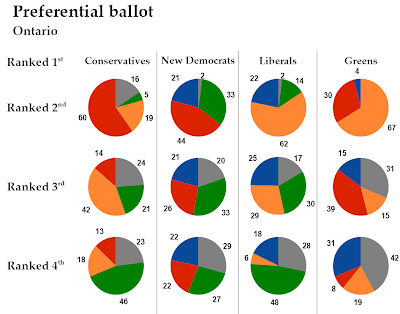 Liberals are a little more mixed, giving the NDP their second choice and the Greens their fourth, but splitting between the three parties on the third ballot. 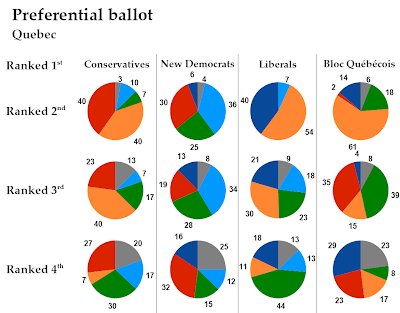 For the New Democrats, though, more than two-thirds list the Bloc Québécois as their second or third choice. Another large portion go over to the Liberals as their second choice and the Greens as their third, but the Bloc only really has room for growth down ballot from NDP supporters. The problem with that is that in most ridings the race is between the NDP and the Bloc.

The Bloc goes over to the NDP in massive numbers. It is interesting to note that only 2% of Bloc voters list the Liberals as their second choice - though that grows considerably for the third and fourth rankings. They are also the party least likely to rank one of the three fringe parties among their top four. 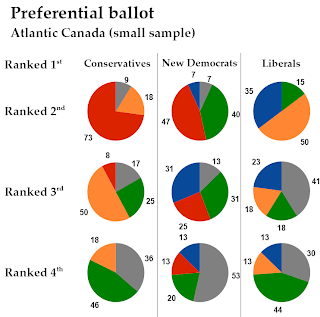 I include Atlantic Canada in order to complete the region-by-region breakdown, but the samples are very small. Nevertheless, their is nothing too unusual in the results despite the small number of respondents.

In terms of seats, I used the first choices to distribute support across ridings as I would do with a normal poll.

In a number of seats, a candidate has majority support right off the bat. In total, the Conservatives win 60 seats before the instant run-off begins (27 in Alberta, 15 on the Prairies, 13 in Ontario, and five in B.C.). The New Democrats have majorities in 23 seats (14 in Ontario, three in B.C., two each in Quebec and Atlantic Canada, and one each in Alberta and the Priaires), while the Liberals have 11 majorities (six in Atlantic Canada, three in Quebec, and one each in B.C. and the Prairies). The Greens also win a majority in Elizabeth May's riding with first choice support.

This chart shows the number of ridings in which each party leads with first choice support only. The Green leads in Atlantic Canada and the North are just a statistical fluke of the poll. You can see that these results are relatively standard, based on what other polls have been showing.

But the results are radically different once the preferential ballots are distributed to give each riding an MP with majority support.

The Conservatives lose one seat in the north, two each in Atlantic Canada and British Columbia, six in the Prairies (all the seats in which they led but did not have a majority), and 16 in Ontario. The Liberals lose one seat in Quebec in which they led on first choice ballots, while the NDP loses two (both in Ontario). The Bloc loses all four, while the Greens lose the one in the north.

That means that the NDP comes from behind to win one seat in British Columbia, four on the Prairies, seven in Quebec, and eight in Ontario. The Liberals win one seat each in British Columbia and Quebec, two each on the Prairies, in Atlantic Canada, and the north, and 10 in Ontario in which they trailed on first choice balloting. That is a huge and important difference, and is primarily due to the inability for the Conservatives to grow after the first choice ballots are counted. In many cases, they lose ridings in which 40% to even 42% listed the Tories as their first choice.

Small parties are rarely included in polls, so it is interesting to see what happens when they are added to the pile. It didn't change much, though. Only 1% listed Christian Heritage as their first choice, 0.9% listed the Libertarians, and 0.7% listed the Pirate Party. These parties never run full slates, so even these levels of support would be hard to achieve.

But which fringe party found the most favour with supporters of each of the main parties? Christian Heritage was the most preferred fringe party of Conservatives, with 11% of them ranking the CHP as either their second, third, or fourth choice. The Libertarians were the most popular choice of Liberals, with 7% listing them in the top four (it may have to do with the similarity in their names). The Pirate Party was the favourite of the Bloc (7% listed it in their top four), the NDP (9%), and the Greens (14%).

Overall, 30% of the ranking slots in the top four on Green ballots were occupied by one of the three fringe parties. Conservative supporters reserved 24% of their slots for these parties, while that dropped to 18% among New Democrats, 16% among Liberals, and only 12% for the Bloc. It is perhaps not too surprising that supporters of the Greens, the fringiest of the main parties, are most likely to consider the other parties highly. For the Conservatives, it may have been a proxy "none of the above" response.