Two polls of the provincial voting intentions of Quebecers showed that the race between the opposition Liberals and the governing Parti Québécois is tightening up, after the PLQ enjoyed a wide lead after Philippe Couillard's leadership victory. But is it enough to entice Pauline Marois to pull the plug on her government?

Léger Marketing was in the field Aug. 29-30, giving us a good indication of how voting intentions are moving amid the charter controversy. They suggest they are not moving very much, with the Liberals unchanged at 36% and the PQ up one point to 33%. The PQ's gain is within the margin of error (or would be with a probabilistic sample), but the party is up from the 27% it had back in June.

The Coalition Avenir Québec was also stable at 18%, while Québec Solidaire made a three-point gain to hit 9%. That is a significant shift, though it puts QS back to where it was before their recent dip. Support for the Greens was down one point to 2%, while support for other parties was also at 2%. Of the entire sample, 4% were undecided and 9% gave no response or said they would not vote.

Note that Léger's report did not remove the undecideds, with the exception of the province-wide sample. In the chart above, I have done so.

If the purpose of pushing the Charter of Quebec Values at this moment - it was an electoral promise, after all - is to try to galvanize the PQ support, the party has been partly successful. At 33%, the PQ is above where it was on election night in 2012 and it puts them in range of the PLQ, particularly in the seat count due to their lead among francophones. But if the purpose was to propel them into a majority government, they seem to have fallen short of that. And the Léger poll suggests support for the charter is dropping, meaning the PQ may be at a high watermark.

This was a very large poll by Léger, and they broke it out into multiple demographic and regional groups. Among francophones, the PQ continued to lead with 39% (this is where they have made most of their gains over the summer), while the Liberals were up to 28%, the CAQ was down to 20%, and QS was up four points to 10%.

Regionally, the Liberals led on the island of Montreal with 42% (down three points from the election, though) and in Quebec City with 39%, while they were tied on the Rive-Nord (the suburbs north of Montreal) with the PQ at 36% and were ahead in western Quebec with 36% as well. The PQ was ahead in eastern Quebec with 42%, central Quebec with 33%, and the Rive-Sud with 35%, while the CAQ had its best numbers in Quebec City (27%) and central Quebec (28%). Québec Solidaire was at 14% on the island of Montreal, up two points from the election.

Using Léger's regional data, the projection model gives the Parti Québécois 60 seats, short of the 63 needed to form a majority government. The Liberals take 55 seats, the CAQ gets eight, and Québec Solidaire holds their two seats.

The PQ would need to be doing better in the suburbs of Montreal in order to have a shot at winning a majority government - being effectively tied with the Liberals will not do. For the PLQ, they need to pull more seats out of their francophone vote - trailing in central Quebec, the best francophone region for the party in the last election, is problematic. 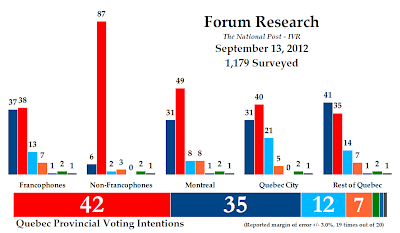 Speaking of problematic, Forum Research also released some provincial numbers earlier this week. But the firm, and The National Post report, did a very poor job of interpreting the results, chalking up the Liberal lead to the charter despite not having been in the field since the last election. Forum has no way of knowing whether the charter is the reason for the PLQ's lead, as they do not know where the PLQ stood before the charter was revealed. And since other polls suggest that the Liberals had an even wider lead than seven points earlier this year, it seems doubly wrong to credit something that has happened in only the last few weeks. Forum also says that the PQ is 'suffering' from the charter, despite being three points up on their electoral performance of 2012. And the report in the Post put the same angle on the poll. It is disappointing, and appears to have continued with Forum's federal results: crediting the charter with boosting the Trudeau Liberals despite the party being down two to four points in Quebec from where they stood in Forum's polling before the charter was announced (or even rumoured at).

This provincial poll itself is not entirely unusual, with the PLQ at 42%, the PQ at 35%, and the CAQ at 12%. For the Liberals and PQ, those numbers are not too far from some of the recent polls by CROP and Léger. For the CAQ it is a tad low, but that could be a sampling issue.

The linguistic divide is also odd, with the PLQ at 38% among francophones. That is an amazing number for the PLQ. That puts them ahead of the PQ, which stood at 37%. Among non-francophones, the PLQ had 87% to 6% for the PQ. But these numbers don't add up very well - if we weigh Forum's numbers according to the demographic profile of Quebec (roughly 80% francophone, 20% non-francophone), we get a result of 48% for the PLQ and 31% for the PQ. It is not very clear how Forum came to 42% to 35% split with these numbers - the proportion of francophones would have to be more than 90% of the final weighted numbers for it to work out.

Nevertheless, using Forum's regional numbers (which appear quite reasonable), the Liberals would be capable of winning a majority government - but only just. They'd take 63 seats to the PQ's 57, while the CAQ would be reduced to just three seats and Québec Solidaire would win two.

Taken together, what do these polls tell us? Certainly, that the race is increasingly between the Liberals and the Parti Québécois. The CAQ is falling back to ADQ levels of support, which condemns them to being in the running for less than 10 seats. Depending on how the vote breaks down, and particularly how francophones are leaning, the Liberal lead is generally not wide enough to ensure a majority victory, while the PQ's deficit is not small enough to give them a good chance of winning a majority themselves. It makes it difficult to guess at what Marois will do going forward. There isn't much here to base an electoral roll of the dice upon, but things could get worse before they get better.
Posted by Éric at 11:43:00 AM