The latest federal numbers from Harris-Decima were released on Friday via The Canadian Press, showing that Justin Trudeau's Liberals continue to hold a lead over the Conservatives and that stability ensues in Canadian politics. 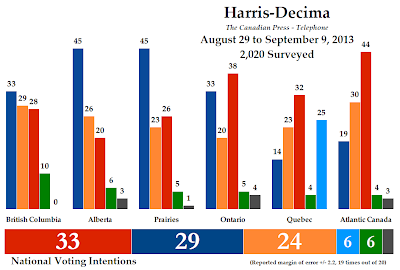 We have not heard from Harris-Decima since immediately after Trudeau's leadership victory. Since that poll, which was conducted in the last two weeks of April, none of the parties have experienced a statistically significant shift in support.

The Bloc Québécois was unchanged at 6%, while the Greens were down one point to 6%. Support for other parties was approximately 3-4%, based on the leftovers from Harris-Decima's report.

It generally shows stability with a few blips here and there - the Liberals managed over 35% support a few times, but have also been as low as about 30%. The Conservatives, meanwhile, have not broken 30% while the NDP has not broken 25%. Considering that you expect a little wobbling back and forth in polling, this suggests that voting intentions have been holding steady.

That is the case in most regions of the country, at least in terms of where things have moved since April. There were no shifts larger than a single point in Ontario, where the Liberals led with 38% to 33% for the Tories and 20% for the New Democrats. Atlantic Canada showed no statistically significant shifts either, with the Liberals at 44%, the NDP at 30%, and the Conservatives at 19%, and the Prairies were similarly steady: 45% for the Tories, 26% for the Liberals, and 23% for the Prairies.

There was more movement in Quebec, where the Liberals dropped to 32% and the Bloc Québécois stood at 25%. The NDP was at 23% while the Conservatives were up five points to 14% support.

In British Columbia, the Conservatives were up 11 points to 33%, followed by the NDP at 29% and the Liberals at 28%. The Greens were at 10% support in the province.

Alberta had the most movement, though it is probably just an anomaly. Harris-Decima had the Conservatives down 13 points to only 45% support in Alberta, while the New Democrats were up 19 points to 26%. The Liberals were at 20% support. These numbers make Alberta a very competitive province - assuming these numbers occurred in an election, the Liberals could win three seats and the NDP could win four, leaving just 27 for the Tories. It is difficult to believe that it could actually happen, but this is what might if the numbers province-wide looked like this.

It wouldn't prevent the Conservatives from pulling more seats out of the equation with fewer votes, however. They would likely win around 126 seats, compared to 123 for the Liberals, 54 for the New Democrats, 33 for the Bloc Québécois, and two for the Greens.

It is possible, though, that the Liberals could be under-estimated in Quebec if their support is distributed more broadly outside of Montreal. That has the potential to cut the Bloc seat count down by a few seats, putting the Liberals narrowly ahead of the Conservatives nationwide.

They might not necessarily need the extra seats, though. With a combined 177 seats, the Liberals and NDP would have a working majority. Whether they could make that majority work, however, is another question entirely.

So, steady as she goes in Canada as we get into what is looking like a tumultuous fall session. But the Liberals have to be happy they have been holding the lead for as long as they have been - it puts Trudeau's performance above those of his two predecessors in the office. And they have just two more years to go.
Posted by Éric at 11:14:00 AM