The Corporate Research Associates released their latest numbers for the provincial scene in Nova Scotia, showing that Stephen McNeil's Liberals still hold a significant lead over Darrell Dexter's New Democrats. But the numbers might not work very well for McNeil, as the Nova Scotia projection now puts him in a position to win only a minority government.

The vote projection is almost entirely based on the latest CRA poll, the only real difference coming from their May survey (taking up a whopping 0.4% of the projection) and the model's estimate of support for other parties and independents being 0.7% (rather than the 0% of CRA). So, the vote projection has moved exactly like CRA's latest poll: a four-point drop for the Liberals and a five-point gain for the NDP.

Taking into account past polling error, that puts the likely band of support for the Liberals at between 39.1% and 44.8% of the vote, compared to 30.8% to 33.8% for the New Democrats. The Progressive Conservatives remain in third with between 22.8% and 26.3% of the vote. (As a reminder, and for first time readers, the results highlighted in the 'boxes' in the projection chart are considered the most likely results, based on how the polls have been wrong in recent elections.)

The seat projection has moved more dramatically. The Liberals have slid six seats in the projection to 22, putting them four seats short of a majority government. The NDP gained seven seats to reach 20, while the PCs were down one seat to nine.

Nevertheless, the Liberals are still in the better position as they have only dropped three seats in their likely result. They had been projected to take between 24 and 33 seats with CRA's May numbers, and they have since slid to between 21 and 30 seats. That puts them well in range of a majority government, and with the NDP's most likely range moving to between 20 and 22 seats Dexter's odds of victory are slim.

That is, if the polls are off by only an average amount. If the polls miss the call as wildly as they have in some recent campaigns, then an NDP majority is certainly possible (it was not considered possible when they trailed by almost 20 points - polls are never that wrong). Their maximum seat haul is 33, assuming enormous error in the polls. If it goes the other way, however, they could be reduced to 11 seats and perhaps displaced as the Official Opposition by the PCs.

The Liberal vote is simply not very efficient, and with CRA's polling showing the two parties neck-and-neck in the Halifax region the race is very much undecided. Particularly considering that 41% of respondents to CRA's poll were actually undecided. 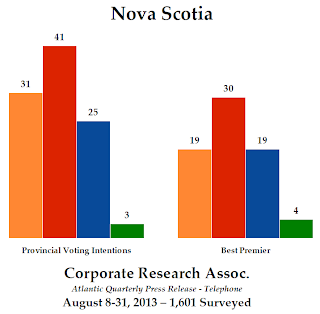 That is a huge number, but nothing unusual for CRA. It has actually dropped two points from their last poll. Whether it is something that really needs to be of concern, however, is another matter. As Don Mills explained in an interview with me, CRA does not include 'leaning' voters in their polls outside of campaigns. That has the potential to inflate the size of the undecided vote considerably.

CRA found the Liberals to have fallen to 41% while the NDP had risen to 31%. That five-point gain was just outside the margin of error for decided voters, whereas the Liberals' four-point drop was just inside of it. The PCs slipped one point to 25%, while the Greens were unchanged at 3% support.

For the New Democrats and Liberals, this puts them back to where they were between August 2012 and March 2013. The PCs, meanwhile, have been stuck at around this level of support for years.

McNeil topped the leadership table with 30% saying he would make the best premier, compared to 19% for both Dexter and Jamie Baillie of the Tories. That is generally unchanged from May. But McNeil is down from the 35% he had on this question a year ago, while Dexter's numbers are getting worse compared to his party. He had 26% support for premier in November 2012, for example, at a time when his party was at 29% support among decided voters.

But in addition to the significant gain, the NDP has another small bit of silver lining in this poll. Government satisfaction rose to 42%, the highest it has been since November 2012, while dissatisfaction fell by four points to 45% - the lowest it has been since February 2012, when the NDP was polling at 44% and had a 17-point lead over the Liberals. Perhaps this suggests that those undecided voters may be satisfied enough with the government, but not yet sure they want to vote for it again.

Will this be enough for Dexter to call the election? Nova Scotians still expect the call any day now. Having put his party within spitting distance of the Liberals, when before they did not have a chance at all, is a minimally positive development. The 'momentum' may falter if Dexter waits until CRA's next quarterly report to pull the plug. And as we have seen time and again, campaigns still matter. Dexter has every reason to hope he can pull off what Alison Redford, Christy Clark, and Jean Charest (almost) did, in that they were all equally on the road to defeat.
Posted by Éric at 10:17:00 AM