The Corporate Research Associates released their quarterly provincial poll numbers for Newfoundland and Labrador last week, showing that the Liberals have moved ahead in the province, displacing the New Democrats. But another poll by Abacus Data for VOCM suggests that the NDP has also slipped a little in St. John's, giving the Liberals a decent shot of winning a majority government if an election were held today. 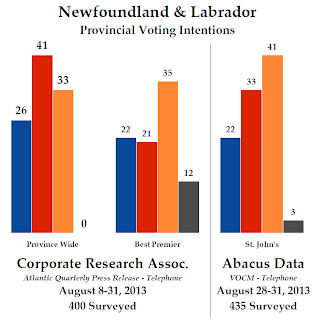 CRA was last in the field in May, and since then the Liberals gained five points to hit 41% support, the highest they have been in a very long time. The New Democrats were down four points, still a historic high considering that the party had never won more than a single seat in a general election before 2011, while the Progressive Conservatives were down one point to 26% support. None of these shifts were outside the margin of error.

Abacus Data shed some more light on the race in St. John's, polling more people in that city than CRA did in the entire province. Abacus found the New Democrats to be leading in the capital with 41% support, representing a four point drop since the 2011 election. The Liberals placed second with 33%, a gain of 26 points, while the PCs have fallen 25 points to only 22% in the city. This suggests that the NDP has been generally treading water, while PC voters have swung heavily over to the Liberals.

The poll gives the NDP the advantage among women (14 points) whereas it is much closer among men (two points). The NDP led among voters in the city between the ages of 18 and 59, while the Liberals were narrowly ahead among older voters. The New Democrats had an 11-point edge in the outskirts of the city (Wards 1, 4, and 5) but were ahead by only five points in the city centre (Wards 2 and 3).

With CRA's numbers, however, the eight-point Liberal lead is not enough to win an outright majority. The party would likely win 24 seats, half of those at stake, with almost all of them coming west of the Avalon and Burin peninsulas. The New Democrats would win 19 seats, almost all of them in and around St. John's, while the Tories would win just five seats.

Of course, this is close enough that only a few errors would tip the balance of power. But if we apply Abacus's St. John's numbers specifically to the ridings in that city, we see that the Liberals are in a much stronger position.

The Liberals have boosted their support enough in St. John's to take three of the city's eight ridings, increasing their overall seat count to 27 and reducing the New Democrats to 16. That is a majority government for the leaderless Liberals.

How the numbers will move once the Liberals do select their next leader will be interesting to see. CRA found that Lorraine Michael, leader of the NDP, is by far the most popular leader in the province: 35% said she would make the best premier, compared to 22% for current premier Kathy Dunderdale and 21% for interim Liberal leader Eddy Joyce. That makes Dunderdale about as popular as her party (when we remove the undecideds and none-of-the-aboves), Joyce much less popular, and Michael much more. If Newfoundlanders and Labradorians like the new Liberal leader, the party would appear to still have some potential for growth.

The government, though, is in dire straits. Dissatisfaction has increased to 64%, almost double where it was a year ago. Satisfaction has accordingly been cut almost in half to only 31%. Only 3% of residents said they were completely satisfied with the government. To put that in some context, 12% were completely satisfied this time two years ago, and that was at 38% when Danny Williams resigned as premier in 2010 (90% of Newfoundlanders and Labradorians were completely or mostly satisfied at the time). Though Dunderdale and the PCs do still have two years to turn things around, it could be that voters in the province have already decided it is time for a change.
Posted by Éric at 9:16:00 AM