Le Devoir released the latest provincial numbers for Quebec from Léger Marketing over the long weekend, showing the Liberals still leading the way but now chased by a gaining Parti Québécois. With the governing party making inroads among francophones, they are now back in a position where re-election is a strong possibility. 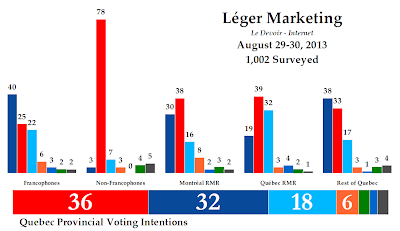 Léger was last in the field in mid-June, and since then the Liberals slipped two points to 36%. The PQ was up five points, however, to 32%. That is their best result since February. The Coalition Avenir Québec was down one point to 18%, their worst number ever in a Léger poll.

Québec Solidaire dropped two points to 6% (note that they were at 11% as recently as May), while the Greens were unchanged at 3% and Option Nationale was down one point to 2%. Another 3% said they would vote for a different party, and 10% of the entire sample was undecided or gave no response (a drop of six points from June).

This is an online sample, so the margin of error does not apply. But if it did, only the PQ's gain of five points would be outside of it. A 13-point gain on satisfaction with the government is certainly significant, as satisfaction has reached 39%. That is the highest it has been from Léger since the PQ formed government. Dissatisfaction was down 13 points to 57%.

Important shifts in support occurred among francophones, as the Parti Québécois picked up seven points to lead with 40% among this demographic. The Liberals dropped five points to 25%, while the CAQ was up to 22%. Among non-francophones, the Liberals were up 11 points to 78% support, followed by the CAQ at 7%.

Though it may be a coincidence, this PQ gain among francophones and PLQ gain among non-francophones would seem to align well with the PQ's proposed Charter of Quebec Values. An earlier Léger poll found that Quebecers were generally approving of it, and this current poll pegged the PQ as the best party to 'defend and protect Quebec's culture and values'. Fully 47% of Quebecers chose the PQ on this question, compared to 16% for the PLQ and 12% for "none of them". The gap was nowhere near as large on other questions concerning fighting corruption and the handling the environment, for example. The PLQ was ahead on the economy and employment, with 35% to the PQ's 23% and the CAQ's 12%, which is a good thing for them. If the next election is going to be fought on the economy by the PLQ and culture by the PQ, it is not clear which side would win out.

The Liberals were steady throughout Quebec, leading with 39% in Quebec City and 38% in the Montreal region. They were in second in the regions of Quebec with 33%. The PQ led here, picking up nine points to reach 38%. They were up to 30% in Montreal and down to 19% in Quebec City, where the CAQ was second at 32%, a gain of eight points. The party was down to 17% in the regions and steady at 16% in the Montreal area.

Québec Solidaire was at only 3% support outside of the Montreal region, and slipped to 8% in the metropolis. The party seems to be fading back to where it was on election night after flirting with double-digits since the spring.

Due in large part to their advantage among francophones, the Parti Québécois would likely be able to pull more seats out of these numbers than the Liberals. They would win 61 to the PLQ's 57, while the CAQ would plummet to only five seats and Québec Solidaire would retain their two.

This would actually give the PQ some options, as they could try to form a coalition or loose arrangement with either the CAQ or QS to command a majority of seats. The PLQ, however, would be less well positioned than they currently are. They would need the support or the abstention of QS to win any vote in the National Assembly, along with the votes of the CAQ.

It should come as no surprise that the PQ can win more seats with a four-point deficit. In the 1998 election, the PQ was able to win a big majority government while being behind by about a point. The problem for the Liberals is their lower support among francophones. Note that when the party last won a majority government in 2008, the final poll of the campaign from Léger gave the PLQ 36% support among francophones. They are a long way from there. But Philippe Couillard does have some time before the next vote - everyone expects it in the spring, but with the CAQ polling at an all-time low there seems to be little incentive for François Legault to pull the plug.
Posted by Éric at 9:16:00 AM