Liberals gain in opening round of Nova Scotia election

The first polling numbers for the provincial election campaign in Nova Scotia were released yesterday. The poll by the Corporate Research Associates for The Chronicle Herald shows that Stephen McNeil's Liberals have extended their lead over the governing New Democrats as the campaign kicks-off. The projection accordingly puts the Liberals on track to win a majority government.

The Liberals have picked up 4.8 points in the vote projection since the last update incorporating polling data up to Aug. 31, and now lead with 45.5% support. The New Democrats have dropped 2.4 points to 28.4%, while the Progressive Conservatives are down 1.6 points to 23.2% support.

The likely vote ranges give the Liberals between 43.7% and 50% support, compared to 28.4% to 31.2% for the New Democrats and between 21.3% and 24.6% for the Tories. As even the maximum and minimum ranges of the Liberals and NDP do not overlap, this suggests that the Liberals should be able to win the popular vote unless a historic degree of polling error occurs.

From a flimsy minority, the Liberals have moved into a comfortable majority. The projection model gives the Liberals 30 seats with these numbers, a gain of eight since Aug. 31. The NDP has fallen six seats to 14 and the PCs have dropped two seats to seven. But a majority government is not completely in the bag for McNeil: the likely range still puts him as low as 25 seats, one short of a majority. His upper likely range is a far larger majority of 34 seats. The New Democrats would be likely to win between 14 and 21 seats with these levels of support, while the Tories could expect to win between three and seven seats.

The maximum range for the New Democrats, however, does put them ahead of the Liberals' minimum range. This means that if the polls completely miss the call and the gap narrows to some four points, the NDP could pull more seats out of the equation. 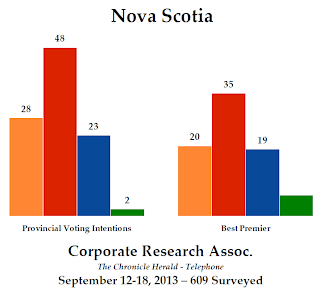 But the Liberals remain firmly in control of the situation. The CRA poll gave the Liberals 48% support among leaning and decided voters in Nova Scotia, a gain of seven points from the firm's last poll of Aug. 8-31 (which excluded leaners). That is a statistically significant increase in support, so it would appear that the campaign has gotten off to a good start for McNeil.

The New Democrats were down three points to 28% and the Progressive Conservatives were down two points to 23%, both shifts within the margin of error. The Greens were down one point to 2%. Of the entire sample of eligible voters, 22% were undecided.

McNeil picked up five points on who would make the best premier with 35%, putting him well ahead of Darrell Dexter's 20% and Jamie Baillie's 19%. This will be an interesting number to keep an eye on. In British Columbia, for example, Christy Clark was making bigger gains on this question than her party was in the final weeks of the campaign. Support for John Percy of the Greens for premier was not mentioned in the Herald report on the poll.

The Chronicle Herald is promising regular, daily updates on the polls in Nova Scotia. It will be interesting to see how this is handled as we have not seen daily tracking in any provincial campaign since New Brunswick's 2010 election. I encourage the Herald to be as copious with the data as possible. Their first report was missing a few bits of information that the Election Act requires, namely the field dates of the poll itself, but hopefully that will be rectified in the future.

Election laws in most provinces are actually quite strict on these sorts of things: for example, Nova Scotia requires a full report (including weighting schemes) be made available upon request (owners of the data can charge 25 cents per page!) at some point during the campaign. Similar laws exist elsewhere in Canada, but the laws are rarely followed to the letter. In Nova Scotia, the law requires someone like me, who is reporting the poll within 24 hours of its publication, to include all the same information that the poll sponsor is required to report! (As always, I will do my best to follow the laws of the province I am writing about.)

For the purposes of transparency and disclosure, it would be ideal if The Chronicle Herald released full data reports of their polls after a reasonable delay. After all, once the headlines are written that data is not worth very much anymore and of interest just to us wonks.

In any case, it seems that the race remains the Liberals' to lose. Support for the three parties has been generally wobbling back and forth for a long time now, and it is certainly not good news for the government that the gap is shrinking as the campaign begins. The opposite happened in British Columbia. We will see whether this race will perk up a little in the coming weeks.
Posted by Éric at 10:45:00 AM