The latest numbers from Abacus Data, released to Sun Media on Tuesday night, caused a bit of a stir. They put the three parties in a tight three-way race and placed the Conservatives narrowly ahead for the first time in any poll since Justin Trudeau became Liberal leader. But though the poll differs from the consensus opinion on where the parties stand, it is in complete agreement in terms of which direction they are heading. 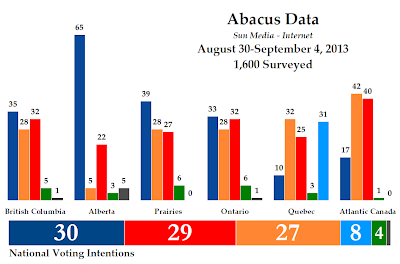 That consensus opinion is reflected by ThreeHundredEight's current polling averages, which still give the Liberals a four-point lead even after including Abacus's findings.

But Abacus was last in the field in mid-June, like the other firms that have recently reported. And like those firms, it shows that nothing of real consequence has happened over the summer months in the polls.

Since that June poll, Abacus finds the Conservatives gaining three points to sit atop the table with 30%, while the Liberals were unchanged at 29% and the New Democrats were up one point to 27%. All of these shifts in support appear insignificant, assuming a probabilistic sample.

The one change that was outside the theoretical margin of error was the fall of the Greens by six points to 4%, though that puts them at a far more reasonable level of support than June's 10%. The Bloc Québécois was up two points to 8%, while 1% said they would vote for another party and 22% were undecided.

It is clear that Abacus differs from what the other polls are showing in terms of actual support, but the trends are similar. That is, perhaps, more important than where the parties actually stand. Why Abacus has been consistently at odds with other pollsters since the beginning of 2013 is less clear.

The large national sample reported by Abacus is deceptive, as it over-sampled Ontario (note that Abacus releases complete weighted and unweighted results, including for all respondents and committed voters, and kudos to them for that). This was re-weighted accordingly, but it means that the samples outside of Ontario are quite small. This leaves those numbers vulnerable to wider variations, which did indeed occur.

In British Columbia, the Conservatives led with 35% while the Liberals were up 15 points since June to 32%. The NDP fell to 28%, while the Greens were down 17 points to 5%.

But Quebec was the most interesting result. Being an important electoral battleground for the NDP and Liberals, the unusual result is worth noting. Abacus gave the New Democrats the lead with 32%, one of the few polls to do so since Trudeau became Liberal leader. But unlike those few other examples, it was the Bloc Québécois that placed second with 31%, followed by the Liberals at 25%, a drop of nine points. The Conservatives had just 10% support.

Is this about Quebec's Charter of Values? It is popular among francophones, and both Trudeau and Thomas Mulcair have come out against it (the Bloc's support has been tepid, but that would have only been known after this poll was conducted). But Trudeau's opposition was much stronger than Mulcair's (at least, it was when this poll was done) so it follows that the NDP may have regained some support. But it could just be a coincidence.

One thing that is interesting about Abacus's numbers in Quebec, however, is how they are consistent with the trends recorded in Léger Marketing's latest poll:

Both Léger and Abacus were in the field at similar times recently and in June, making it useful to compare their numbers. The numbers themselves are quite different for the Liberals and Bloc, with Léger having given the Liberals 46% in June and Abacus only 34%, while the Bloc was at 15% and 23% in the two polls.

The numbers are still different now, with the Liberals at 35% according to Léger and 25% according to Abacus, while the Bloc is at 23% and 31% respectively. But the trends are almost identical: the Liberals slipped 9 or 11 points, the NDP gained five or six, and the BQ was up eight. Are we looking at an emerging trend?

In terms of seats, the Abacus poll would deliver the Conservatives a greater advantage than their one-point lead would suggest, with 123 seats to 95 for the Liberals and 87 for the New Democrats.

With the heated language we've heard from the NDP concerning the Liberals lately, it is hard to imagine them working together. But their combined 182 seats would give them the ability to form a working majority government, despite the Bloc's 32 seats.

Of note, these poll numbers (and the new boundaries) would give the New Democrats five seats in Saskatchewan, generally considered the best case scenario for the party in the province (they held their caucus meeting there this week, and much was made of their potential for gains). Mulcair did mention hoping to win a majority of seats in Saskatchewan, a reasonable hope to express for a party wanting to form government, and perhaps not as unrealizable as some have suggested. By my reckoning, at these levels of support the NDP is within range of another two seats, which would give them half of the province's 14 seats. Winning an eighth seat, though, would be very difficult.

But though the poll does have some good news for the New Democrats (Within-the-margin three-way race! Leads in Quebec and the Atlantic! Strong numbers in Ontario!), they should be as reluctant to take this poll without a grain of salt (a phrase I have come to loathe) as the ones that have put them well behind the two other parties. Abacus is showing a consistent trend with the other pollsters, suggesting that they are not discovering a new political landscape that will be borne out in other surveys. And that suggests that, though there are a few dissenters, the Liberals are probably still ahead.
Posted by Éric at 10:28:00 AM