CAQ falls away in CROP poll, LPC and NDP tied in Quebec

The latest La Presse/CROP poll was released yesterday, showing that the race is increasingly becoming two-headed in Quebec between Philippe Couillard's Liberals and Pauline Marois's Parti Québécois. Federally, the Liberals and New Democrats remain locked in a close race in the province. And in both cases, the likely seat count does not reflect the overall vote. 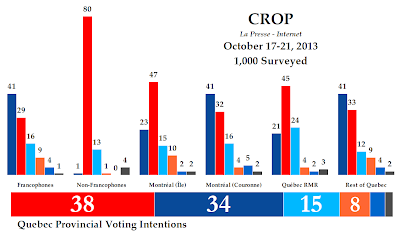 The Liberals have picked up three points since CROP's mid-September check-up, and remain in the lead with 38% support. The Parti Québécois closed the gap by a tick with a four-point gain to reach 34%. Both parties are now above where they stood on election night in 2012. And the PQ has been gaining in every CROP since May, when they were registered at just 24%.

The loser in the equation is the Coalition Avenir Québec, which dropped six points to only 15% support. That is the lowest they have been in any poll by either CROP or Léger since the party's creation. Québec Solidaire was down three points to 8%, while 4% of respondents said they would vote for Option Nationale and 2% said they vote for another party. Of the total sample, 12% were undecided and another 6% said they would not vote or did not respond to the question.

The PQ is heading into a caucus retreat to figure out if they should call an election after the municipal campaigns wrap-up on Nov. 3. A four-point deficit is not exactly a strong argument for taking such a risk, but the numbers are actually not that bad for the Parti Québécois: they have 41% support among francophones, a gain of six points in the last month. The Liberals trail at length with 29%, while the CAQ dropped eight points to 16% among this demographic.

At around this level of support among francophones, the PQ does move into a position where they could theoretically win an election and even a majority government. But would Marois be able to keep the PQ at 40% or more among francophones throughout an entire election campaign? One imagines that is what the party will  be trying to decide at their retreat.

The Liberals have the non-francophone vote down more comfortably than they usually do, with 80% support. The CAQ came a distant second with 13%.

The Liberals led in the two major cities,  with 47% support on the island of Montreal and 45% support (a gain of 17 points) in Quebec City. They trailed with 33% in the regions of Quebec and 32% in the Montreal suburbs around the island.

The Parti Québécois led in those suburbs with a 17-point gain to 41% support, while they also had 41% support (a gain of 11 points) in the regions. They were down 13 points on the island of Montreal to 23% (about where they were in the last election) and 10 points to 21% in Quebec City.

The provincial capital was the best region for the CAQ, but 24% is not very impressive. The party was down 21 points to 16% in the suburbs of Montreal and eight points in the regions to just 12%. The CAQ did pick up nine points on the island of Montreal to reach 15%, but that will do them no good.

You may have noticed that CROP's poll has wrenched upwards and downwards quite dramatically. Even with these small regional samples, shifts of 10-20 points are unusual. It would seem that the September poll was a bit of an anomaly, as these CROP numbers are aligning more closely with what we would expect and what we have seen in Léger's polls.

Québec Solidaire was more stable, with only a drop of six points to 9% in the regions being of note. Elsewhere, the party had 4% in Quebec City and the Montreal suburbs and 10% on the island of Montreal. That is actually not a very strong performance, as QS had 12% on the island in the 2012 election.

How much of a gamble would an election be for the PQ? With CROP's regional numbers, the model gives the party 63 seats and awards 59 to the Liberals.

That is about as risky as it gets, since the PQ is straddling the line of a majority government and is also just four seats up on the PLQ. It would not take much to flip those numbers.

Québec Solidaire would retain their two seats and the CAQ would win one. Their regional numbers are just too low (16% in the suburbs represents half of the vote they took in that region in 2012), but I imagine a few incumbents could prove hard to knock off. That has just as much chance of hurting the PQ as it does the Liberals, making a majority government somewhat less likely.

(You may have noticed that I had said the model gave 62 seats to the PQ and 60 to the Liberals in yesterday's brief analysis with the Quebec averages, but I neglected to apply an incumbency advantage to Agnès Maltais in Taschereau in those calculations.)

Do any of the fundamentals help or hinder the PQ's electoral chances? That, too, is a mixed bag. Satisfaction with the government was unchanged at just 35%, suggesting the PQ may have little room for growth. That is among its better results since coming to power, though, so the PQ may look at the current climate as being as good as it will get. Support for sovereignty was at 38% in the poll, also limiting the party's potential for real growth (with ON and QS, sovereigntist parties already have 46% support).

The leadership numbers may be tilting in Marois's favour, however. Largely by default: Marois was up three points to 23%, putting her narrowly ahead of Couillard who fell five points to 22%. Poor François Legault was down two points to 13%. Françoise David had 7%.

The numbers seem to have stabilized over the last month, so the PQ may not get the kind of results they are hoping for that would make an election call an easy decision to make in the next few weeks. But would the PQ do better in an election now, with debate focused primarily on the Charter of Quebec Values (whose popularity has been increasing in polls from both CROP and Léger), or in the spring, when they are likely to present a budget that puts the province back in the red? The answer is rather obvious. On the other hand, if the PQ waits will the CAQ impale itself and bring down the government in the spring if they are still polling in the teens? 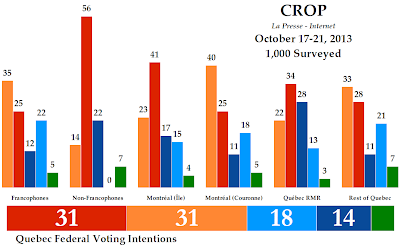 The contest at the federal level is even closer. The NDP slipped two points since September to 31%, putting them in a tie with the Liberals, who held steady. The Bloc Québécois was up a point to 18%, the Conservatives were unchanged at 14%, and the Greens were up one point to 6%.

Of the entire sample, 9% were undecided and another 5% did not respond.

A close race looking a lot like this has become the polling consensus of late. But CROP let's us take a peak at the regional and demographic numbers, showing that the race is not as close throughout the province.

Like their provincial cousins, the Liberals were ahead on the island of Montreal with 41% support (a gain of 11 points) and in Quebec City with 34%. They were in second in the Montreal suburbs with 25% and in the regions of Quebec with 28%.

The NDP's vote broke down similarly to the PQ's, with 40% support in the suburbs of Montreal (a drop of 10 points) and 33% in the regions. They had just 23% support on the island and 22% in Quebec City, putting them in third place.

The Conservatives were second in the provincial capital with 28%, but were well behind with 17% on the island of Montreal and 11% in the rest of Quebec.

The Bloc Québécois had 21% support in the regions, 18% in the Montreal suburbs, 15% on the island, and 13% in Quebec City. If they are to have a hope of pulling more than a handful of seats out of these low numbers, they need to do better in at least one part of the province.

The NDP's lead among francophones gives them the majority of Quebec's seats with 41, compared to 29 for the Liberals, six for the Conservatives, and just two for the Bloc Québécois. The Liberals do dominate the island of Montreal and win the most seats in Quebec City, but it is the NDP's advantage in the Montreal suburbs and the francophone regions of Quebec that wins the day.

This is a bit of a change from earlier poll numbers in Quebec, when the Liberals were doing well in all regions of the province. The party seems to be reverting back to their traditional bases of support when they were a major player in the province before the sponsorship scandal hollowed them out. Compared to where the party has been in Quebec in the last three elections that is certainly good news, but it will make a decisive electoral victory difficult for the party. For the NDP, a base of support in francophone Quebec alone assures the party more seats in the House of Commons than they ever achieved before 2011.

On leadership, both Justin Trudeau and Thomas Mulcair slipped by two points to 26% and 25%, respectively. Stephen Harper was well behind with 11%, while Daniel Paillé and Elizabeth May tied at 5%.

It would seem that both the Liberals and New Democrats would be quite pleased with vote intentions settling in at around these levels of support for the next two years. It puts both in a position to turn a good campaign into electoral gains. The NDP gets to prove they have lasting power in Quebec, while the Liberals get to show they have recovered from the doldrums of the 2006, 2008, and 2011 elections in the province. But Quebecers have not been sitting still for very long lately.
Posted by Éric at 9:50:00 AM