Why the Liberals need Quebec in 2015

My political education occurred during the years of minority government in Ottawa, when the Bloc Québécois was assured of winning a majority of seats in Quebec and elections were decided in the rest of the country. Quebec was a No-Man's-Land where only some 20-30 seats were ever at stake, making the province about as electorally important as the Prairies, Alberta, or Atlantic Canada. And, since a good portion of those seats went unchallenged just as in those other regions, the significance of Quebec in the electoral math was tiny.

The election in 2011 and the downfall of the Bloc Québécois changed all that. With the New Democrats now a major player in the province and the stigma of the sponsorship scandal apparently exorcised by the arrival of Justin Trudeau for the Liberals, Quebec is a major battleground and will play an extremely important role in deciding who wins the election in 2015.

A new iPolitics/EKOS Research poll released this week illustrates the importance of Quebec to the Liberals' electoral calculations. 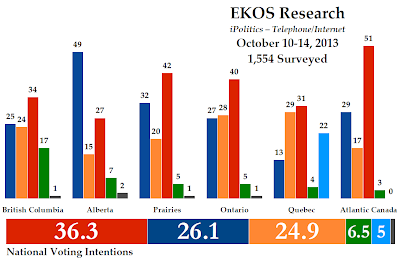 I looked at this poll for The Huffington Post Canada so I won't go over the details here, but I would like to highlight EKOS's methodology briefly. It is not really possible to compare this poll to the last one from EKOS from early July, as that poll had been conducted via IVR whereas this one was conducted with a hybrid telephone-online methodology. I'll let Frank Graves explain, as he did in an email:

"The methodology is interesting. It is based on an RDD recruited panel which includes both cell phone and landline households. Unlike other panels, live interviewers have interviewed all respondents to verify who they are and get a dossier of basic information. We cover those who cannot or do not want to do the interview online using a hybrid. In this case, we did live interviews with that portion of the population...In short we end up with a probability panel which covers virtually the entire population."

We are seeing this sort of hybrid approach more and more. It certainly muddies the methodological waters, but it seems like a good compromise instead of going whole hog into the online field or sticking with the old methods.

But back to the subject at hand. This poll is about as good as the Liberals can hope to achieve in 2015 - everywhere except in Quebec. Their strength in British Columbia in this poll is about as high as it has been in any poll since Trudeau's leadership victory, and the nine-point lead over the Tories is significant. Being in the high-20s against a weakened Conservative Party in Alberta opens up a few seats, while a lead in the Prairies is something rarely seen. Having 40% in Ontario is a plausible high for the Liberals, but a 12 or 13 point lead over the Conservatives and NDP is huge. And having majority support in Atlantic Canada is also big for the Liberals.

That these numbers are among the best the Liberals have managed in years probably points to the poll being on the outside edge of the margin of error. We will see what other surveys say in the coming weeks. But as an example of a best-case scenario for the Liberals in 2015, this EKOS poll will do nicely.

Again, except in Quebec. Aside from Alberta, Quebec was the worst region for the Liberals in this poll. With only a two-point lead over the New Democrats, the party is not in a position to win a lot of seats in the province. And with the Bloc Québécois down only a few points from their performance in 2011, it makes it possible for them to come up the middle between the Liberals and NDP and hold on to a few seats. This is not a good recipe for hopes of a Liberal majority in 2015.

The seat projection bears this out. The party does extraordinarily well in every other part of the country, winning the plurality of seats in British Columbia and the majority in Ontario and Atlantic Canada. A few seats in Alberta and the Prairies adds to the Liberal haul. With the exception of Quebec, this is a blueprint for how the Liberals could plausibly win a majority government in 2015.

But because of the close race in Quebec with the NDP, which has greater strength among francophone voters (at least according to the latest Le Devoir/Léger poll), the Liberals only take 24 seats in Quebec against 41 for the New Democrats. The Conservatives manage to pick up a few extra seats due to the sagging NDP vote, while the Bloc is able to hold on to theirs (or at least the equivalent number). Primarily due to Quebec, the Liberals find themselves 28 seats short of a majority in the 338-seat legislature.

That Léger poll was slightly better for the Liberals than EKOS's result, giving them 33% support to 26% for the NDP and 22% for the Bloc. Using that poll's regional results, the model gives the Liberals 29 seats to 33 for the NDP, nine for the Bloc, and seven for the Conservatives. Bolted on to the EKOS numbers, that improves the Liberals' national total to 146 seats, or 23 seats short of a majority.

It is hard to imagine the Liberals doing better than EKOS's results outside of Quebec. Certainly, a few good candidates and efficient swings could turn a handful of extra seats in British Columbia, Atlantic Canada, and Ontario over to the Liberals, but the party clearly needs to be able to win a majority of the seats in Quebec if they are to have a hope of winning a majority of seats in Canada. They simply are not going to be able to squeeze more seats out of the rest of Canada without a major shift in voting patterns.

It is theoretically possible for the Liberals to win Quebec. The best numbers the Liberals have put up in Quebec since the last election was a Forum Research poll conducted just after Trudeau became leader in April. It gave the party 46% support in Quebec to just 22% for the NDP and 18% for the Bloc Québécois. In other words, it assumes a swing of the same magnitude as the one that propelled the New Democrats to first place in Quebec in 2011. With numbers like that, the Liberals would be able to take some 56 seats in the province, leaving 12 to the NDP, seven to the Conservatives, and three to the Bloc. That gives the Liberals their majority.

However, the Liberals are far removed from those heady days. The party is slumping in Quebec compared to the Trudeau honeymoon stage to the low-30s which, due to the concentration of the Liberal vote in and around Montreal (Léger gave them 40% there in their recent poll, compared to around 28% in the rest of the province), is not nearly enough for them to win half of the seats in the province.

What do they need to be in range of that? Using that Forum high-watermark poll as a base, and swinging the vote only between the Liberals and the NDP, we see that the Liberals would need around 41% or 42% of the vote in Quebec and a lead of 14 to 16 points to be able to win a majority of seats in the province. That means they need to win about as big as the New Democrats did in 2011. That is a high hurdle to jump.

But now that Quebecers will play a major role in deciding who wins the next election the dynamics of the federal race in the province in 2015 will be unrecognizable compared to what it has been since the Bloc Québécois burst onto the scene in the early 1990s. The election will not be about jurisdictional disputes or the sovereignty issue and it won't be about rejecting one party (the PCs in 1993, the Liberals in 2006, the Bloc in 2011). Instead, it will actually be about who might form the next government or, in the case of a Conservative rebound, what the opposition looks like in an almost certainly minority parliament. How will Quebecers react to this re-discovered influence?
Posted by Éric at 10:32:00 AM