Hot off the wires following the release of the Ontario budget yesterday is a poll by EKOS Research that might give Andrea Horwath pause as she considers whether or not to send Ontarians to the polls this spring.

Update: And just as I hit 'post', news comes out that Andrea Horwath will not support the budget. Looks like we're off to the races. Also, an earlier version of this post said the NDP was at 22.9% in the EKOS poll - they are actually at 22.2%. 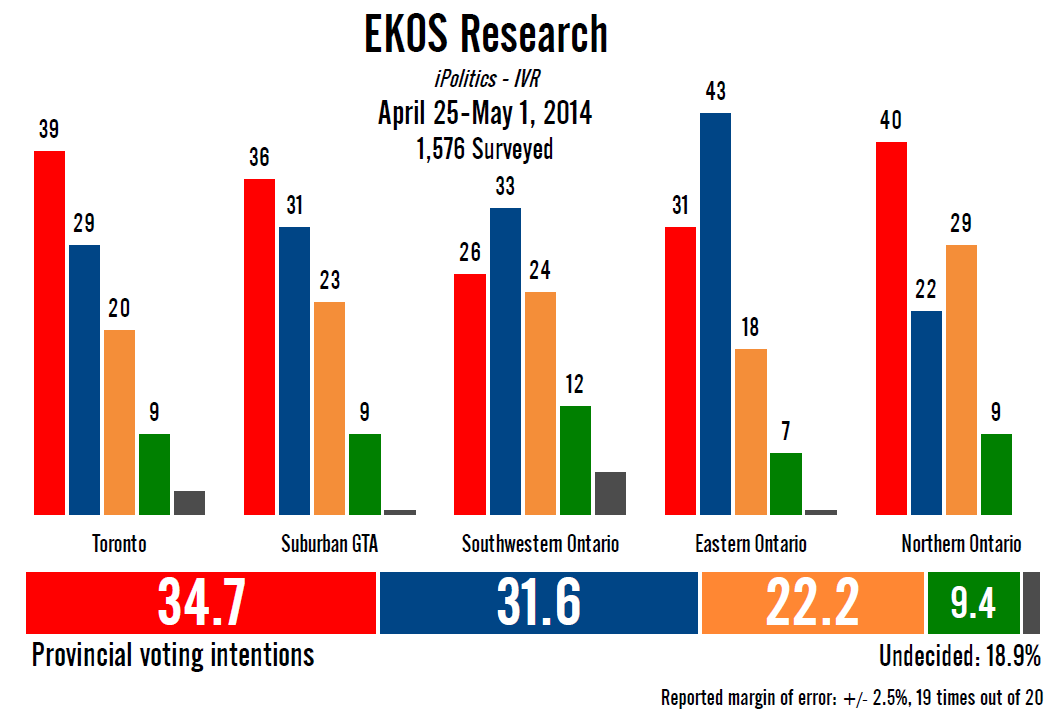 The poll by EKOS Research for iPolitics gives the Liberals the lead with 34.7% support, up 2.4 points from EKOS's previous poll of March 27-April 3. The Progressive Conservatives were also up, gaining 4.2 points to reach 31.6%.

The Greens were up 1.1 points to 9.4%, while 2% of respondents said they would vote for another party. Of the entire sample, 18.9% were undecided.

Only the drop in support of the NDP appears to be statistically significant, though it also looks a lot like a reset. EKOS's previous poll had the New Democrats at 29%, well above the 22% to 23% recorded in subsequent polls by Forum, Nanos, and Innovative. It does differ, however, from the 27% recorded in the most recent Ipsos Reid poll, but even Ipsos was registering a slip in support for the NDP from their own previous poll.

Of significance, however, may be the Tories' lead among the oldest voters. Of Ontarians aged 65 or older, the PCs held a 40% to 36% edge over the Liberals. Among the next oldest tranche of respondents between the ages of 45 and 64, the Liberals and PCs were almost tied (33% to 32%, respectively). This suggests the Tories may have a turnout advantage (which Ipsos Reid also recorded in their poll).

At the regional level, the NDP drop appears to have taken place throughout the province. But in terms of statistical significance, the decreases were particularly marked in Toronto and eastern Ontario.

The PCs led in southwestern Ontario with 33%, followed by the Liberals at 26% and the NDP at 24%. The Greens scored 12% support in this region, their best.

With these levels of support, the seat result would be a toss-up. The Liberals would likely win 45 seats, with the PCs taking 41, the NDP winning 20, and the Greens taking one. (Let's not get overly excited about the Green result - 9.4% is not a particularly reasonable level of support for the party.)

Assuming 10% error in the model, that means the Liberals could win anywhere between 41 and 50 seats and the PCs between 37 and 45 seats. In other words, a coin-flip to determine who takes the plurality of seats.

At these numbers, the New Democrats are not in a good position to make significant gains. Of course, campaigns matter and Horwath does have the best personal numbers of the three leaders, so she may have the most upside. But it is still a gamble. With neither Tim Hudak nor Kathleen Wynne being loved by voters, the NDP cannot rule out the possibility of forming a government of their own if things go very well. But a more plausible best case scenario for the party sees it forming the Official Opposition. The question is whether they would take that role in a minority government, where they would have significant influence, or a majority government, where they would have next to none.
Posted by Éric at 10:14:00 AM