Chow maintains lead in Toronto race ahead of Ford, Tory

While the next election to be held in the country will be New Brunswick's in September, the mayoral election in Toronto scheduled for the end of October will be garnering more attention - as well as ballots. And the latest poll suggests that Olivia Chow continues to hold a lead over her two main rivals. 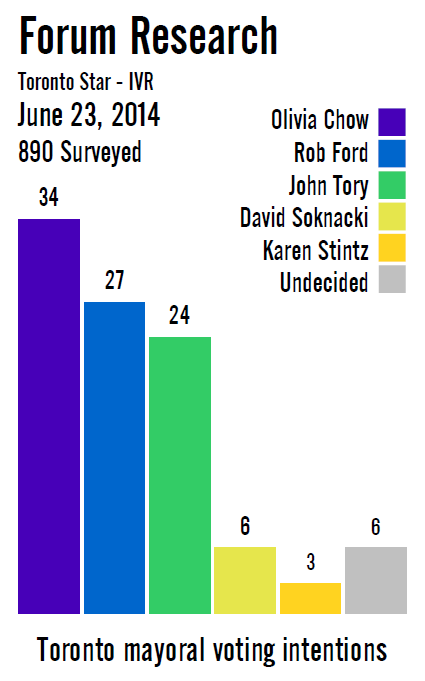 David Soknacki was up one point to 6%, while Karen Stintz was down one point to just 3% support. Another 6% were undecided. Oddly, Forum is not releasing their numbers with the undecideds removed.

The shifts for Chow and Tory just straddle the margin of error, though Ford's are up quite a bit. However, it could very well just be a rebound from an abnormal result in Forum's last poll. If we look at the last four surveys from Forum, Ford has registered 27%, 24%, 20%, and now 27% again. Did Ford really hit rock bottom earlier this month, and has made up some of those losses? Or, more likely, was that 20% on the low side and Ford's support merely reverted to the mean?

Ford's approval certainly remains at an all-time low, at just 32%. It has been between 28% and 32% in the last three surveys, after previously having been in the mid-40s. The latest scandal, apparently, was the straw that broke the camel's crack, er, back. 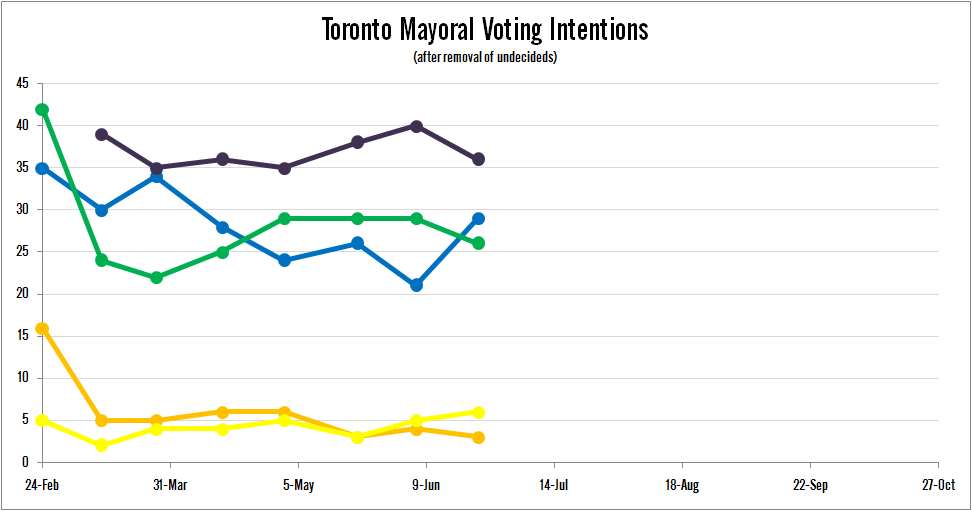 If we look at how the numbers have been moving since candidates could officially register, things have been trending downwards for Ford. He was competitive with Tory and then Chow early on, but has since been on a relatively steady decline, the latest uptick notwithstanding. It was the first poll that ranked Ford second for quite some time.

Tory and Chow have been relatively stable, though Chow's numbers have been somewhat improved of late. Tory was leading before Chow entered the race, and her entry hurt him the most (along with Stintz, who went from respectable to fringe candidate). But Tory has rebounded a little, and the race is still more or less on between the three main candidates.

If Stintz and/or Soknacki drop out due to their low levels of support, it will not help Ford whatsoever. Forum suggests that of the nine points on the table between the two, Tory would get five of them and Chow would get three, with Ford getting just a single point (otherwise known as a rounding error). It suggests that if the race thins out, things will only get worse for Ford, not better.

Things would get a lot better for Tory if Ford drops out, as he would then be able to move to within two points of Chow.

Forum found that over 90% of Torontonians know who Chow and Tory are, compared to just 80% for Stintz and 63% for Soknacki. If we look at the approval ratings of the five candidates among all Torontonians, and not just those who know the candidates, which is what Forum reported, we get an idea of their respective ceilings.

The highest ceilings belong to Tory and Chow, at 56% and 55% approval, respectively. Next on the list is not Ford, but rather Stintz, who has 33% approval among all residents of the city. Ford is at just 32%, barely above Soknacki's 30%. It makes it very difficult to imagine Ford being able to get more than 1/3rd of the vote even under the best of circumstances. At this stage, re-election is simply not in the cards.

Or is it? Ford does trail Chow and Tory on approval and is behind Chow on voting intentions, but he does better on certain issues. He topped the list on being the best to handle the budget, at 31% to 27% for Tory and 26% for Chow, and was nearly tied with Chow on transit (27% to 26%, with Tory at 23%). These are the main issues, with 31% saying transit is the most important issue to them and keeping taxes low being the top issue for another 20% of Torontonians. But on having a vision for the city and, perhaps most importantly, on being able to leave the city in better shape after his or her term is over, Chow was well ahead of both Ford and Tory.

It appears that the race is still very much Chow's to lose, and she stands a better chance of avoiding defeat if Ford stays in the running. But it will be interesting to see if the recent uptick in Ford's support is an anomaly or not. For most candidates, being out of the spotlight for almost two months would normally be a bad thing. For Ford, it is his return that is unlikely to do him many favours.
Posted by Éric at 3:10:00 PM