What effect will the debates have on the race?

How the debate went for the three leaders depends on who you ask, with Tim Hudak, Andrea Horwath, and Kathleen Wynne all getting various shades of passing and failing grades from the pundits. For my part, I thought all three did moderately well. But what do voters think? The answer might depend on what you ask.

But first, the projection has been updated with the latest numbers from EKOS Research and Nanos Research. EKOS is starting their daily rolling poll so we should have new numbers to chew on every day. This should provide a bit of an anchor to the projection, preventing it from swinging too wildly from one day to the next as new data is entered.

In terms of seats, the Liberals were up four to 51 (or between 46 and 56), while the PCs were down two to 41 (or between 35 and 44). This means that the potential for a Liberal majority has increased (though it is still less likely than a minority) and the PCs and Liberals no longer overlap. The likely projection, with pre-debate information, points only to a Liberal victory. But the maximum and minimum ranges still make the election a bit of a toss-up.

The New Democrats were down two seats to 15 (or between 13 and 19), while the Greens are now on the board with a likely range of zero to one seat. But before my Green readers get too excited, this will probably disappear as soon as EKOS implements its likely voter model. 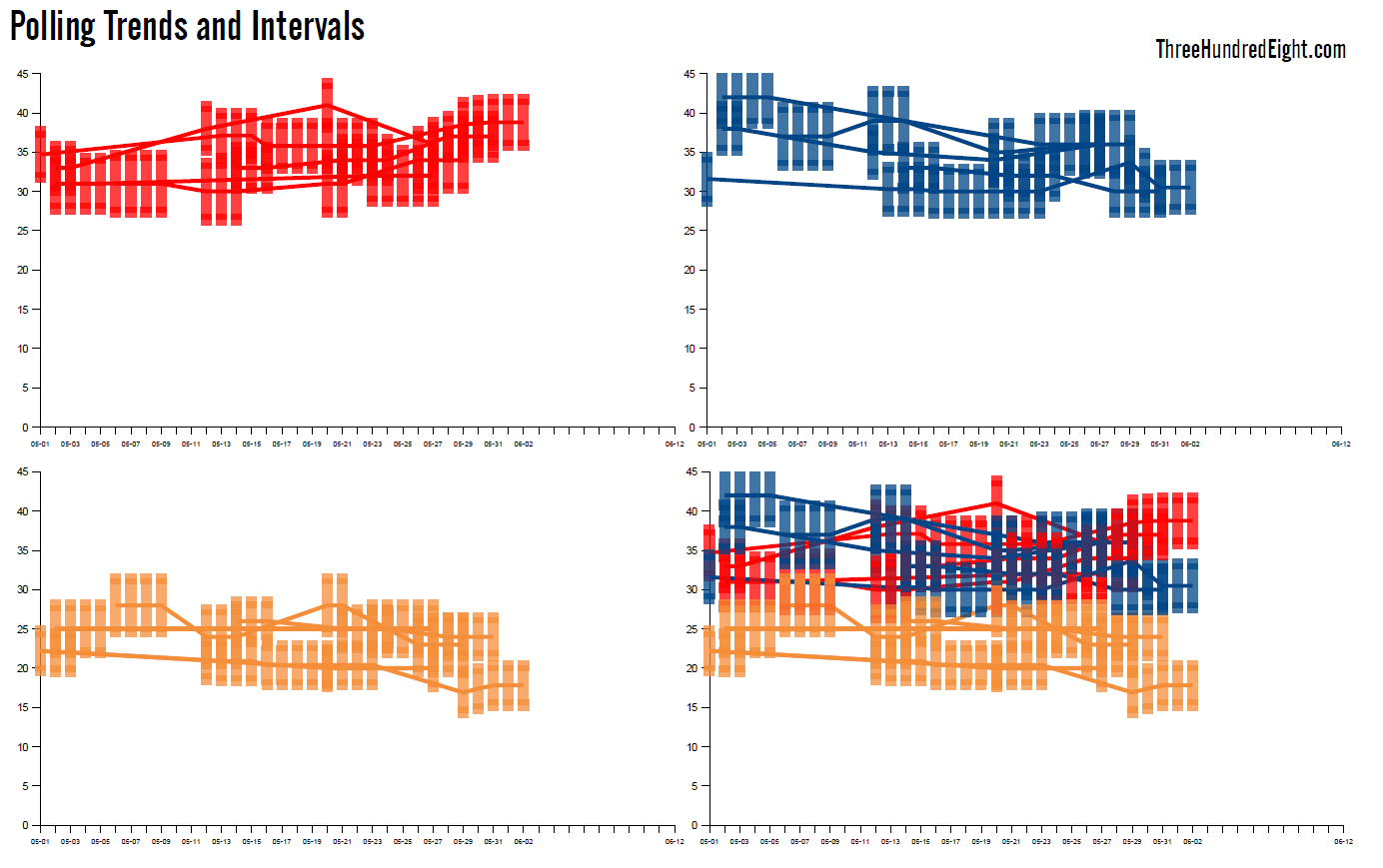 The chart above, which represents each day a poll was in the field, the confidence intervals of those polls, and the trend line for each individual pollster, still suggests the Liberals are on the upswing, while the PCs and NDP remain relatively stagnant. It will be interesting to see if the trends will shift now that the debate is over.

Note that the EKOS poll was out of the field on June 2, the day before the debate, and the Nanos survey is a week old. We won't start seeing the effects of the debate until at least today, but not fully until later in the week or after the weekend.

Also note that Forum Research did release some voting intentions numbers in their post-debate poll from last night, but they only surveyed people who watched the debate, and so the poll is not a normal poll that can be added to the model (people who did not watch the debate will vote too). 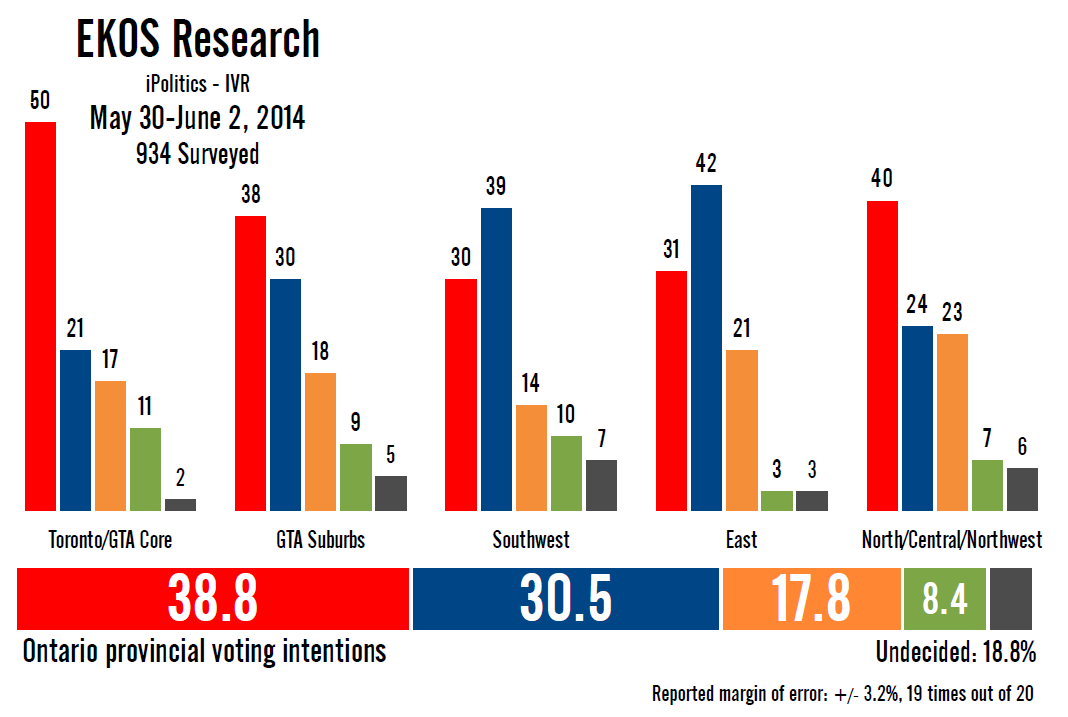 Let's quickly go over the EKOS and Nanos polls before getting to the debate numbers. EKOS is doing a rolling poll now, dropping one day from the sample as a new day is added.

The Nanos poll added to the model was conducted between May 22-26, and so is quite dated by now. It put the Liberals at 37.7%, the Tories at 31.2%, and the NDP at 23.7%. Those numbers were quite similar to the polls being done by EKOS and Abacus at the time.

On the other hand, when Ipsos asked respondents who was best on various issues, Hudak topped the list on the economy, taxes, debt/deficit reduction, and accountability. Horwath was favoured on health care, the environment, and social services. Wynne placed in the middle of the pack on most of these issues, perhaps understandably for a nominally centrist party. But it does suggest that the Liberals are lacking an issue that works for them.

Based on all of these debate numbers, what can we take from it? It does seem that Hudak did do himself well, and stands to benefit from his performance. Horwath did not impose herself very forcefully (only 22% told Ipsos she sounded and acted like a premier, compared to 37% for both Hudak and Wynne), but she was likable. And Wynne did alright with a middling performance. For the incumbent, that may be enough. But we will see in the coming days if Hudak has indeed improved how the electorate sees him and his party.
Posted by Éric at 10:41:00 AM