It seems that the only pollster we have been hearing from lately is EKOS Research, and that is largely true. Though we did see some post-debate polls from other firms, the last voting intentions survey that has been published that wasn't by EKOS was out of the field on May 31, five days ago and well before the debate. We are likely to see some new numbers from other pollsters very soon, and it will be interesting to see if they, like EKOS, show little real change between pre- and post-debate surveys.

What is different about the newest EKOS poll out this morning is that it is the first one from the company to estimate likely voters. Their likely voter model, which I'll discuss below, increases the Liberal lead from five points to nine, which is at odds with what Abacus Data and Ipsos Reid most recently found. While the numbers themselves were different, both firms did find that the PCs improved their position relative to the Liberals among likely voters.

The Liberals are now narrowly over the majority threshold, with 55 seats (up four from yesterday). Their range has them straddling the line, with between 50 and 67 seats. The Tories dropped four seats to 37, or between 25 and 42, while the NDP was unchanged at 15 (or between 13 and 16).

Now that EKOS is doing a rolling poll, its numbers take up a lot of space in the projection. So, a few words about how it is being handled. Each rolling poll is included in the model, but is reduced significantly when a new poll comes out. EKOS is now doing a three-day rolling poll, dropping one day from the sample with each new survey. The projection model is doing something similar. When a new rolling poll comes out, the previous one is reduced to just 33% of its previous weight (1/3 days), and this in addition to the decay that occurs due to the poll being one day older.

The model also caps the weight of any individual poll at 67% of the total weight, but in the case of a rolling poll it caps the combined weight of polls that overlap with the newest poll at 67% as well. In the case of today's projection, the EKOS rolling polls of May 30-June 2, June 1-3, and June 2-4 take up a combined weight of 67% of the projection. The most heavily weighted poll after the new EKOS poll is, thus, the Abacus poll from May 28-31. 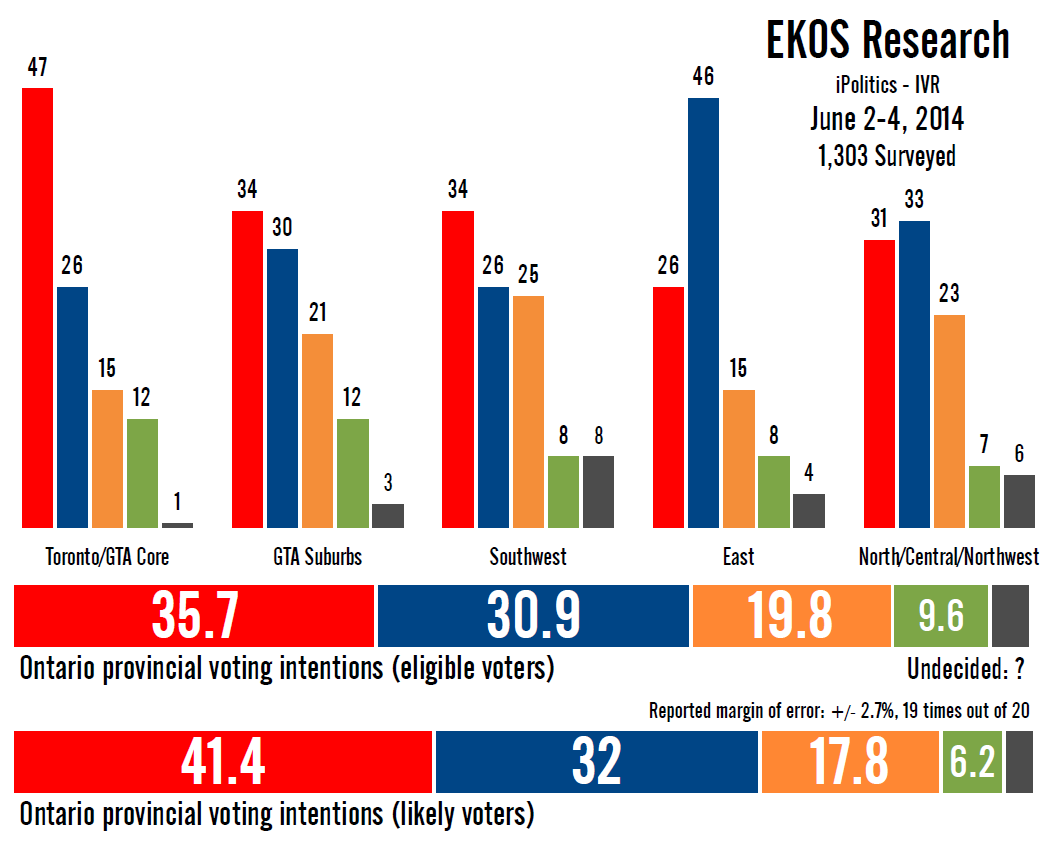 Compared to the last independent sample of May 29-June 1, the Liberals and PCs have both dropped 2.8 points to 35.7% and 30.9%, respectively. The NDP has picked up 2.9 points to reach 19.8%, while the Greens were up 1.8 points to 9.6%. As these shifts are all within the margin of error, we cannot say that the debate has had any real effect just yet.

Among likely voters, EKOS gives the Liberals 41.4%, a significant uptick from the tally among eligible voters. The PCs also gained, to 32%, while the NDP fell to 17.8% and the Greens to 6.2%.

Other polls estimating likely voter support (Abacus and Ipsos) have shown broadly similar effects for the PCs, NDP, and Greens. The Tories tend to gain while the NDP and Greens drop. But the Liberals have gotten either insignificant or no gains among likely voters, with the margin between them and the PCs either narrowing or increasing to their disadvantage. EKOS finds the gap to almost double. Will other polls bear this out?

The EKOS model is interesting, giving each respondent a 'score' based on whether they have voted in the past, their emotional engagement, their stated intention to vote, and whether or not they know where their polling station is. They then reduce the sample to just the top 50% of respondents, to mirror the turnout of 2011. It is an interesting approach, not dissimilar to Abacus's. We will see if it works - but what if turnout is significantly different in this election?
Posted by Éric at 11:27:00 AM