After showing a rather comfortable and sustained lead for the Liberals among all eligible voters throughout the campaign, the latest poll from EKOS Research suggests the Progressive Conservatives have made some significant gains post-debate. Is it a blip, or a sign of things to come?

New polls will be coming out soon to counter-balance what has been an EKOS-only polling period since May 31 (a week ago!). Ipsos Reid is supposed to report tonight and Abacus Data will have its regular poll on Monday, while we can probably expect to hear from Forum Research over the weekend. It will be very interesting to see what these polls show as EKOS has recorded a rather significant bump for the PCs. 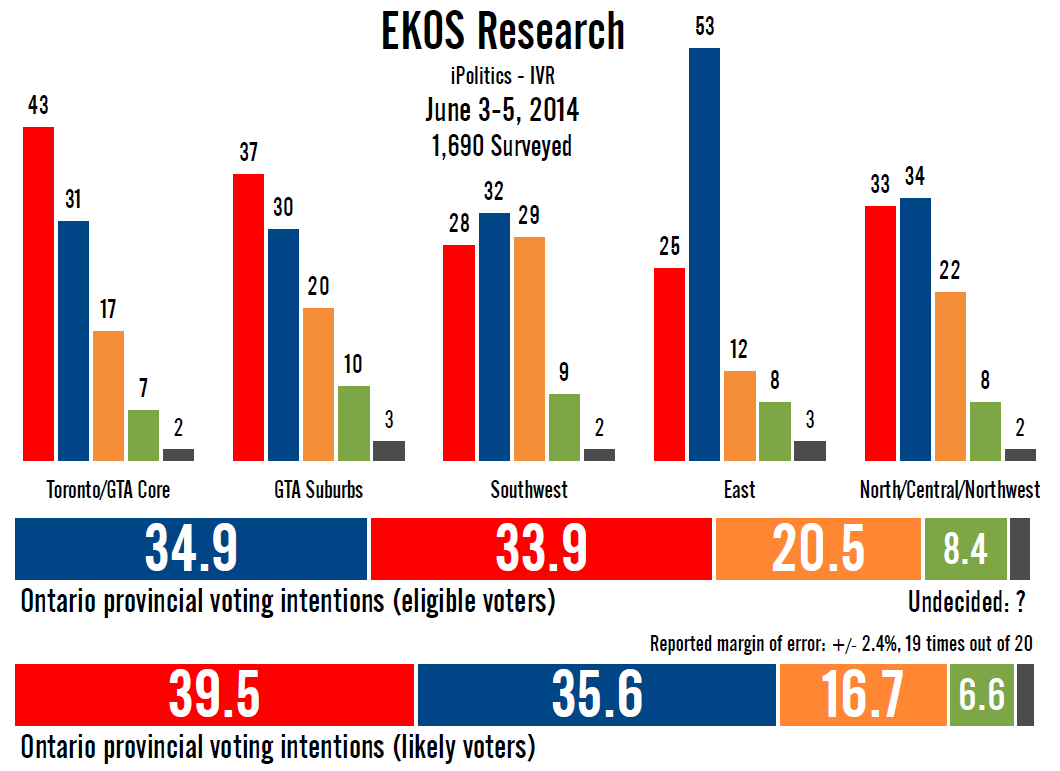 The last independent sample of EKOS's rolling poll was done May 30 to June 2, so just before the debate. This gives us a good chance to see if the debate had any effect, since the newest poll was taken between June 3-5 (polling on the 3rd would have encompassed some of the post-debate period). Of course, we should also be careful not to draw any specific conclusions. While the debate could be the cause for any shift in support, the real reason could be anything else. But we can reasonably assume that the debate and post-debate coverage is a significant factor.

Among eligible voters, the PCs picked up 4.4 points since May 30-June 2 to move into the lead with 34.9%, the first lead that EKOS has given the PCs since April 2013. The Liberals fell 4.9 points to 33.9%. Both of these shifts are outside of the margin of error, and so worth noting.

Among likely voters, however, the Liberals continued to lead with 39.5% against 35.6% for the PCs and 16.7% for the NDP. This means the Liberal lead over the Tories has shrunk from 9.4 points to only 3.9 points since yesterday's poll. The NDP, despite gaining among all eligible voters, dropped among likely voters.

This PC gain could be significant, or it could be a blip. We will have to see what EKOS shows in subsequent polls, as well as if other firms record something similar.

At the regional level, the PCs made gains in every region except the southwest, though only the 10-point gain in Toronto was outside the margin of error. The NDP picked up 15.1 points in the southwest, a region that is now a three-way tie according to EKOS. The Liberals still led in Toronto and the GTA, while the PCs were ahead in eastern, southwestern, and north/central Ontario.

But let's take a moment to talk about Toronto, because something may be happening there. I already discussed this potential earlier in the campaign, when the Tories seemed to be making gains. They are still polling relatively highly, but it appears that the NDP may have lost a lot of support in the city to the Liberals - and it is costing them a handful of seats. 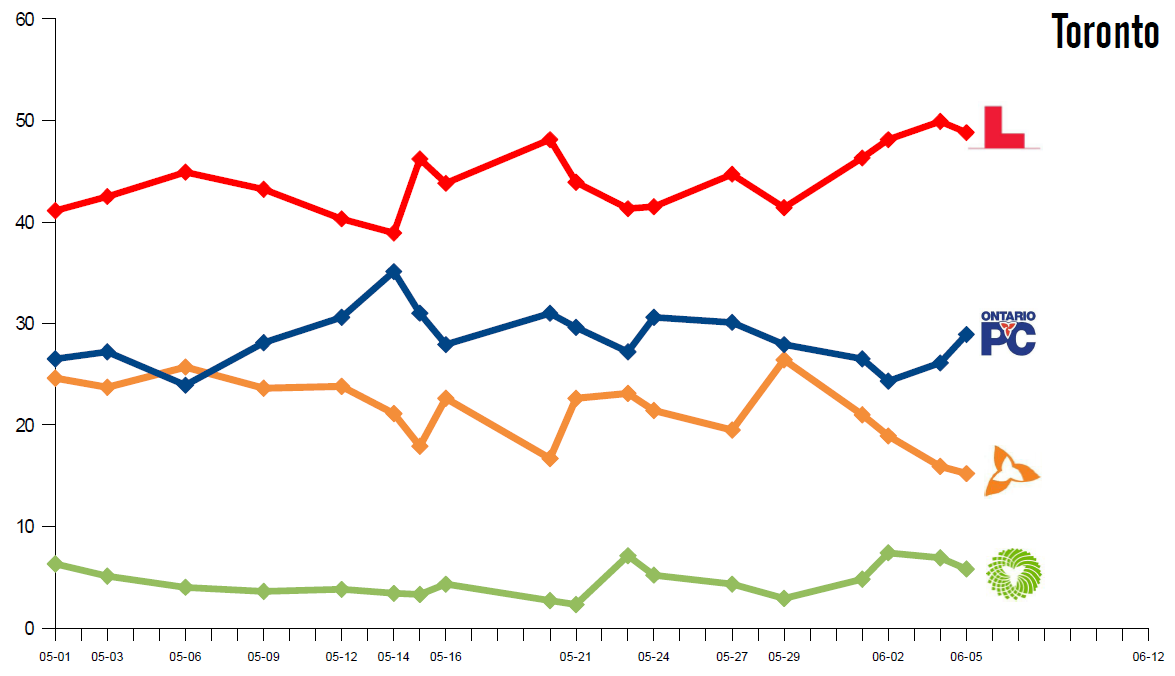 As the chart above shows (showing the regional projection for the city), the NDP has been slipping since May 29 (and if we remove that bump, perhaps since May 23). The latest EKOS survey has them at just 16.7% in the city. While EKOS has been under-scoring the NDP compared to other pollsters throughout the campaign, this Toronto phenomenon is not limited to EKOS.

In 2011, the NDP took just under 27% of the vote in Toronto. It is the region where they have lost the most support. In the rest of the province, they are polling about as high as their performance in 2011.

The Liberals are not taking much more of the Toronto vote than they did in the last election, but the PCs seem to have hoovered up about seven-points' worth of new supporters. We can only speculate why this is happening. In other parts of the province, it is perhaps easier to envision more populist NDPers swinging over to the PCs, but in downtown Toronto it seems more likely that NDPers fearful of a PC victory are going over to the Liberals, replacing those disgruntled Liberals who are swinging over to the PCs. With the NDP polling so low in Toronto, the chances of a Liberal majority are significantly increased. Something to monitor.
Posted by Éric at 11:32:00 AM