A number of polls have been released in the last few days, and they only emphasize just how important the next few days might be in deciding who will form the next government. The numbers are very close between the Liberals and Progressive Conservatives among all voters, but it is among those who will actually vote that the election will be won.

Support for the New Democrats is, perhaps, the wildcard of this election. It is less consequential for the NDP than it is for the other parties, however. If the NDP ends up below 20%, the Liberals will likely prevail even with a vote deficit against the Tories. But if the NDP is over 25%, the Liberals stand little chance. But where will the party end up?

The chart below shows the latest tally among all eligible voters for Ipsos Reid and EKOS Research. I've included Forum's numbers, but the company uses a turnout model to adjust their numbers. 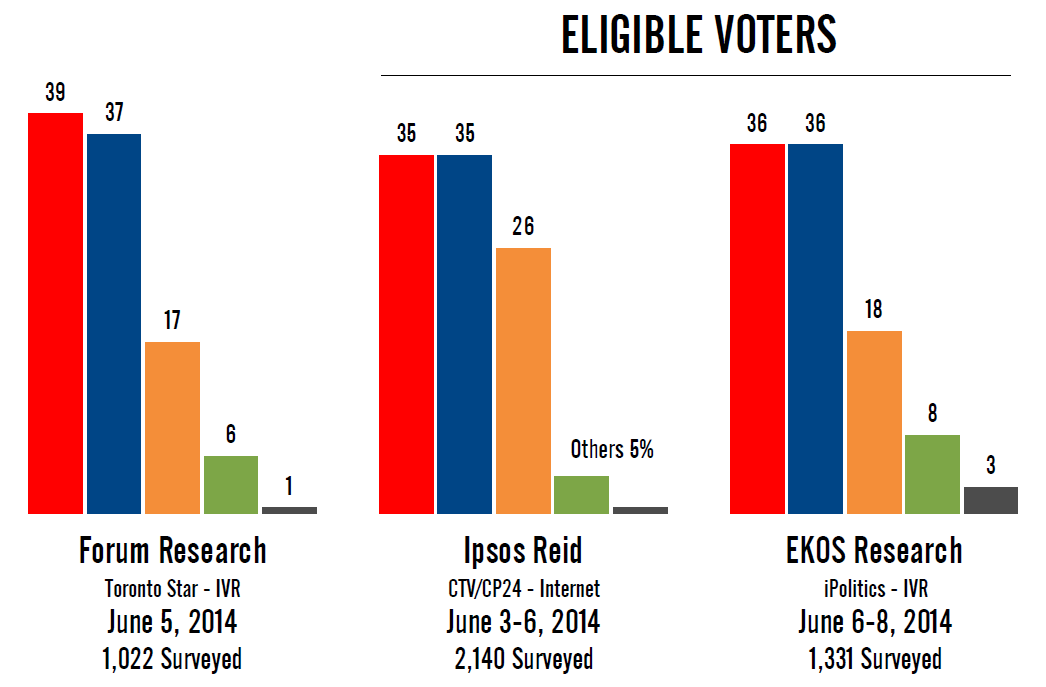 But support for the NDP is another thing entirely. The IVR pollsters (EKOS and Forum) give the party just 17% or 18% support, while Ipsos (online) gives them 26%. That is a huge difference, and one that is extremely important for the seat outcome. The Liberals have a much better chance of winning with the numbers laid out by Forum and EKOS than they do with those of Ipsos.

It should be noted that throughout this campaign Ipsos has been on the high side for the NDP and EKOS/Forum on the low side, so we may be seeing some methodological bias at play here.

Can the results of the past few elections provide any guide for us? Every pollster over-estimated the New Democrats in both the 2007 and 2011 elections, by between 0.2 and 3.3 points. In 2011, two of the final polls were done online (Angus Reid and Abacus), two were done via the telephone with live-callers (Ipsos and Nanos), and two were down via IVR (Forum and EKOS).

In terms of trends, all of the change between these new polls and the last time these firms were in the field at around the same period shows general stability.

The estimates by EKOS and Ipsos of likely voters is even more confusing, since they portray two starkly different outcomes. Again, I've included Forum for comparison. 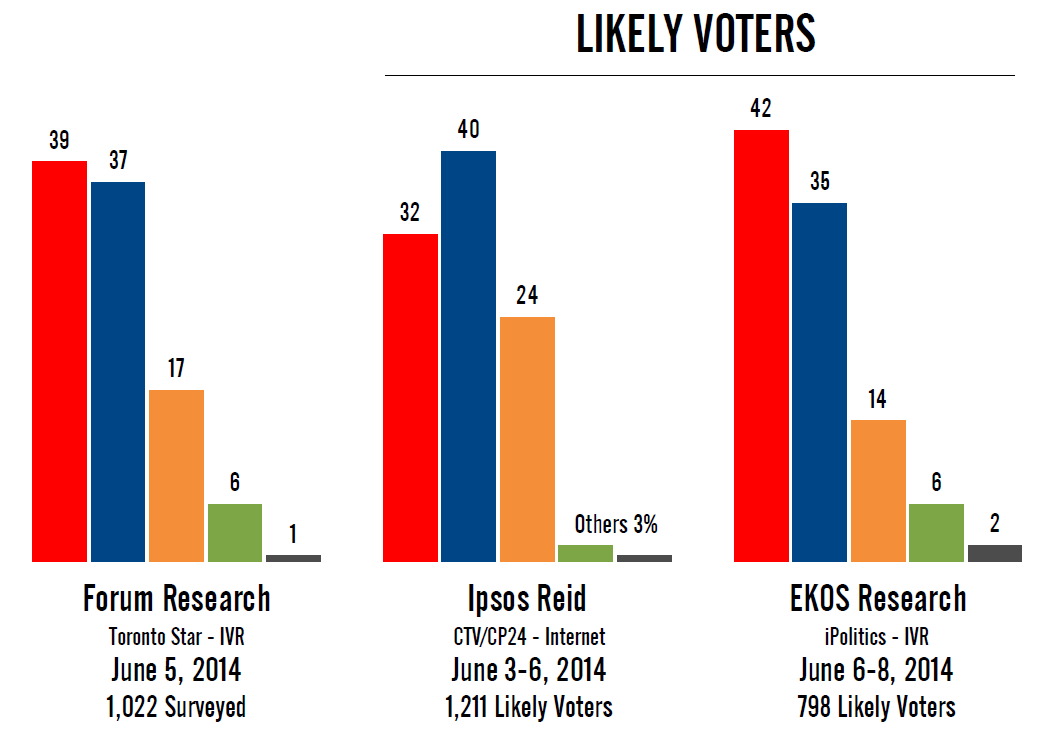 Ipsos gives the Tories a significant lead among likely voters with 40% to 32% support, with the NDP still holding its own at 24%. EKOS, however, gives the Liberals the edge with 42% to 35%, with the NDP at only 14% support. That is extremely low, and would be the worst performance by the party since 1999.

Oddly, Forum's turnout-adjusted numbers seem to split the difference (Abacus Data's numbers have generally done the same, we'll hear from them later today). If this pattern holds through to election day, either Forum and Abacus will land close to the mark while both EKOS and Ipsos miss, or one of the last two will nail it and put everyone else to shame (the middle-of-the-road pollsters to a lesser extent).

But we should hear from every pollster again before Election Day, so perhaps we will see some convergence. Or, someone will be in for a rough night on Thursday.

The Star published the numbers from a series of 18 riding polls conducted by Forum in some swing ridings (a few did not make it on the last that would have been interesting). I've broken them down by region below to see if we can discern any patterns - but we should note that all of these riding polls were conducted before the debate. 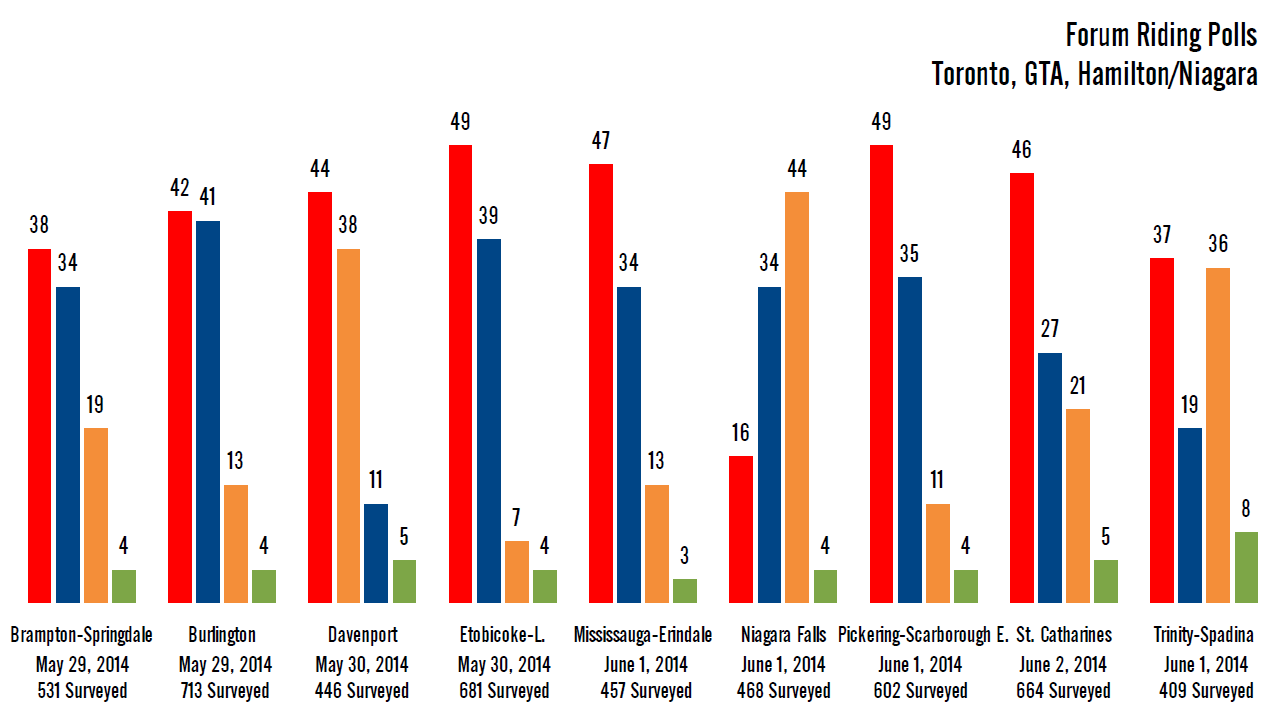 In the Toronto/905 region, we can see that the Liberals are looking rather strong. They looked good against the PCs in Etobicoke-Lakeshore, Mississauga-Erindale, Pickering-Scarborough East, and St. Catharines, while they were narrowly edging out the Tories in Brampton-Springdale and Burlington. This generally backs-up the decent polling numbers the Liberals have been putting up in the GTA.

In the downtown core where the Liberals are facing off against the NDP, the races were close but they nevertheless held the advantage: six points in Davenport and one point in Trinity-Spadina. The NDP, however, looked to be in a good position to retain Niagara Falls. 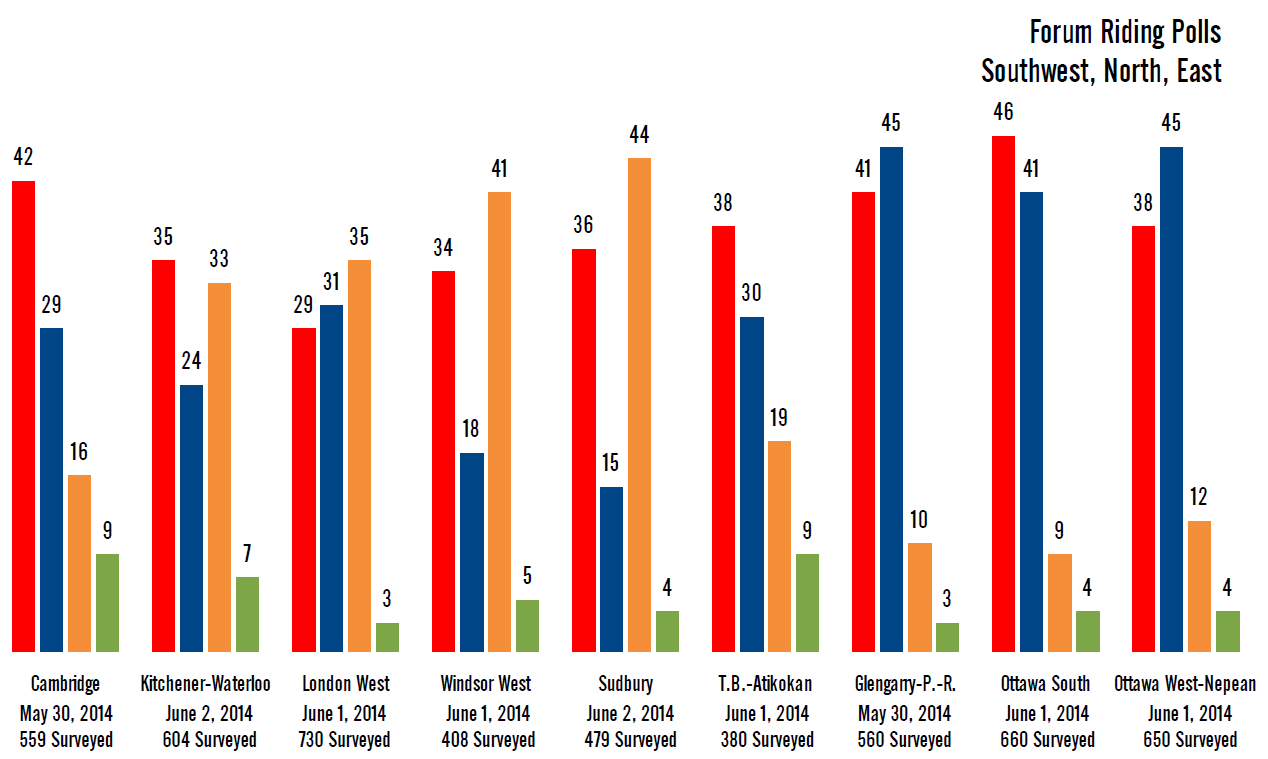 The polling numbers in the four southwest ridings seem to give some credence to the better-than-expected support levels of the Liberals in the southwest. They were ahead in Cambridge, narrowly led the NDP in Kitchener-Waterloo, and were competitive in London West and Windsor West. The PCs were not doing as well as they could have, suggesting that the Tories' support in the southwest may be concentrated outside of the urban centres more than the party needs it to be.

In the north, the NDP was leading in Sudbury while the Liberals were ahead in Thunder Bay-Atikokan. In eastern Ontario, the races were very, very close between the PCs and Liberals, with the NDP a non-factor.

Did the debate shift any of these? It is hard to tell since the polls have been inconclusive on the effects of the debate, apart from a possible uptick for the PCs. This means the party may have moved ahead in ridings like Ottawa South, London West, Brampton-Springdale, and Burlington. But local candidates can mean a lot as well, particularly in ridings like Ottawa South and London West that held by-elections recently. There could be many very close races on election night.

Programming note: the next update on Tuesday will be a little later than usual. On Wednesday, I will probably save my update until the very end of the day, after all of the last polls of the campaign are published.
Posted by Éric at 11:18:00 AM