It is coming down to the wire in one of the closest elections this site has covered. The latest polls added to the model all suggest an extremely close race, with the margin among all eligible voters being three points or less and the margin among likely voters being less than two points. It will make for a nail-biting finish, particularly for your correspondent.

This will be the last update before the final projection update, which will be posted either late Wednesday night or early Thursday morning. The final analysis, either way, will be up on Thursday morning.

It really is very close, but it is one thing to have a close race and another to have a race that might not end up being very close at all. The polls suggest a very tight margin between the Liberals and PCs, but the likely voter model from Ipsos Reid gives it to the PCs in a near landslide. And support for the NDP is either well above their 2011 performance, or well below it, which has a profound effect on the seat numbers for the Liberals and PCs. Unless the final polls show a move all in one direction, we should be going into Election Day with little comfort. 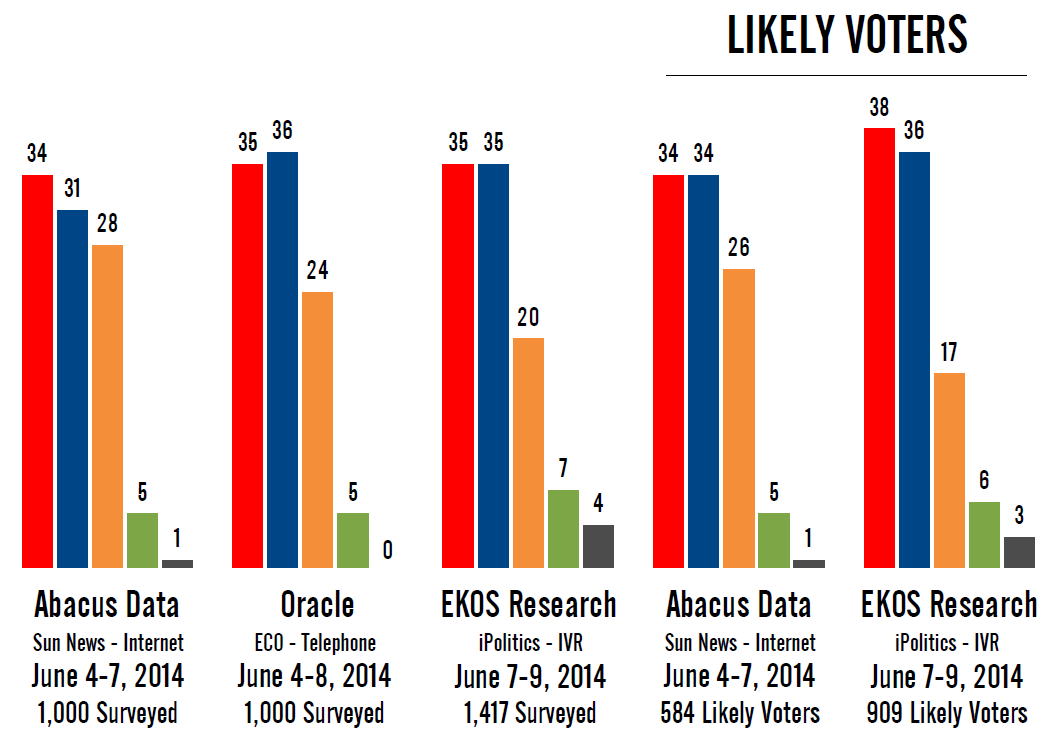 The three latest polls, from Abacus Data for the Sun News Network, EKOS Research for iPolitics, and Oracle for ECO, used a mix of methodologies. They all came to the same general conclusion for the two leading parties: either a tie or a statistically insignificant lead. The Liberals get either 34% or 35% in these polls, the PCs between 31% and 36%. That is rather tight.

For the NDP, though, the range extends from 20% to 28%. That is a very wide range, and spans everything from a waste-of-time election for the NDP or a major breakthrough.

It is interesting to compare the trend lines, however. Abacus was last in the field May 28-31, just before the debate on June 3. Since then, the Liberals dropped three points, the Tories picked up one, and the NDP gained four.

EKOS has been conducting a rolling poll since before the debate, but if we look at its May 29-June 1 numbers, done at mostly the same time as Abacus, we see similar movement: a drop of four points for the Liberals, a gain of one for the Tories, and a gain of three for the NDP. It will be interesting to see if, in the last numbers put out by these polls, we will see things continuing to move in the same direction.

Adam Radwanski in the Globe and Mail today writes about the internal polls being done by the Liberals and Tories. Both now seem to expect a minority government in which they will hold sway, but more interestingly perhaps is that both internal polls have shown an uptick for the PCs since the debate. That jives with the public polls. The projection, for example, had the Tories at just 33.8% in polls done up to June 2.

Abacus had a series of other questions included in their poll that may shed some more light on these horserace numbers.

32% of Ontarians expect the Liberals to win, while 25% think the Tories will prevail. That is rather close, and suggests that voters may go into the polling booths expecting a very tight result. That might encourage strategic voting, which could hurt the NDP and Greens.

On the other hand, just 24% think the Wynne government deserves re-election, a drop of three points since last week, while 54% think it is time for a change, a jump of six points.

Interest in the campaign is growing, as 42% told Abacus they had given quite a lot of thought to the campaign, up from 32% when Abacus first polled in the early stages of the race. Interestingly, and perhaps depressingly for those in the media, the proportion of respondents saying they are following the news concerning the campaign very closely has hardly changed (24%).

Counter-acting the benefits that Tim Hudak has probably gained as a result of the debate (which Abacus's respondents said he won) is that the percentage of Ontarians saying they have a negative opinion of the PC leader has jumped to its highest of the campaign so far, at 52%. No wonder, then, that the Liberals are going after NDP voters with the Hudak boogeyman. Will it work? According to Abacus, NDP/OLP swing voters favour Kathleen Wynne as premier over Andrea Horwath by a margin of 48% to 26%. Oracle, meanwhile, showed that 46% of non-PC voters were casting a ballot against Hudak, rather than for another leader or party.

It is a dizzying array of pros and cons for each leader. Plausible, defensible, and ultimately accurate arguments as to why Wynne or Hudak will win (or that the NDP will out-perform expectations) on Thursday could be written up, and proponents of either could only reasonably agree to disagree. A terrific situation for democracy and election-watchers, a horrible one for pollsters.
Posted by Éric at 1:20:00 PM