Léger puts Liberals and NDP in tie in Quebec

With tomorrow being St-Jean-Baptiste Day, it is only fitting to take a look at the latest poll coming out of Quebec. It's from Léger, reported by Le Devoir on Saturday. The survey shows the Liberals and New Democrats in a tie in the province, but this masks Thomas Mulcair's sparkling personal numbers. 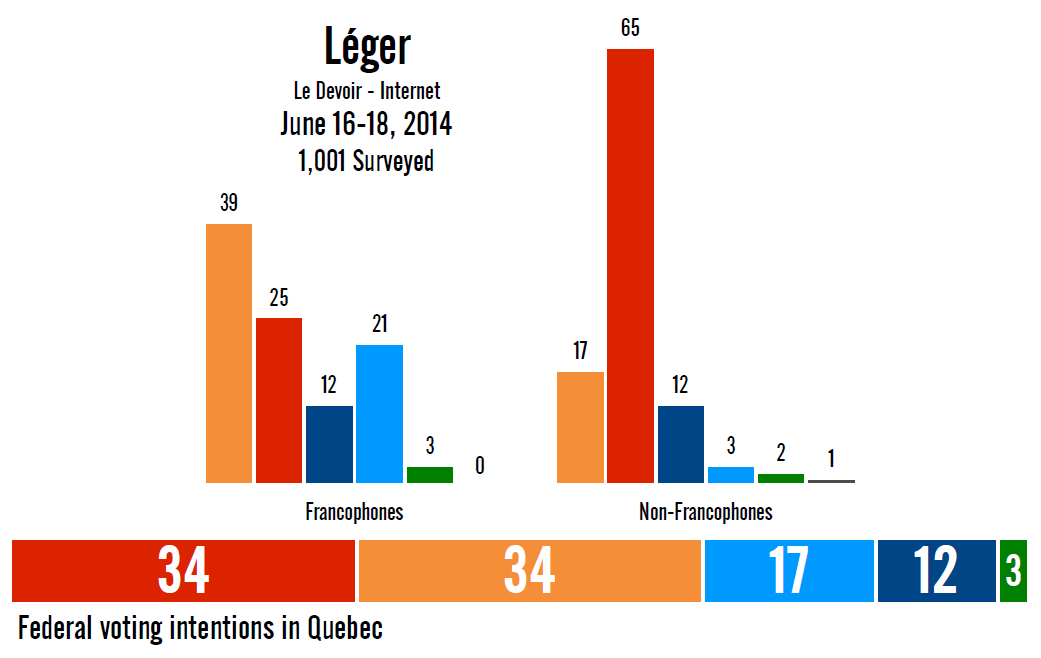 Léger was last in the field at the federal level in October 2013, so we don't really have any trends to monitor.

But this poll showed the Liberals and New Democrats in a tie with 34% apiece. That is not a bad number for the Liberals, who have averaged 33% in polls conducted in 2014 in the province, but it is a great number for the NDP, which has averaged 29%. If we exclude the polls from Angus Reid, which have been bullish on the NDP in Quebec this year, this is the best the NDP has done in any poll in Quebec since an Ipsos Reid survey conducted a year ago.

The Bloc Québécois was third with 17%, along with last week's Forum poll the worst the party has done in quite some time. Perhaps not coincidentally, both this Léger and last week's Forum poll were conducted after Mario Beaulieu was named the new party leader. The Bloc has averaged 21% in polls done in 2014, so this is on the low side for them by any measure.

The Conservatives were at 12%, well within the norm of recent polls in the province.

Among francophones, the New Democrats were well ahead with 39%. That is their best showing since a CROP poll from February 2013, before Justin Trudeau took over the Liberals. His party was at 25%, on the lower end of surveys since he became leader. The Bloc was at 21%, while the Conservatives continued to struggle with 12% support.

Among non-francophones, the Liberals dominated with 65% - actually a bit higher than they have been in recent months. Trailing at a distance was the NDP at 17% and the Conservatives at 12%.

With these levels of support, and especially considering the linguistic breakdowns, the NDP would retain most of their seats and win about 51, with 23 going to the Liberals and four to the Conservatives. The Bloc Québécois would be shut out of the legislature. The Liberal and NDP numbers suggest a huge degree of inefficiency on the part of the Liberal vote, but that is primarily because the party would be racking up super-majorities on the island of Montreal, and losing a lot of closer races elsewhere in the province.

Nevertheless, I would consider this level of inefficiency to be on the edges of the model's margin of error, and that the Liberals would do somewhat better. In four ridings, for instance, the gap between the NDP and Liberals stood at less than five points, so there is some potential for the Liberals to win closer to 30 seats, and the NDP closer to 45, at these levels of support. But we shouldn't be surprised if the Liberals have difficulty pulling a lot of seats out of Quebec, even if they win the most votes in the province.

This could be a problem for the Liberals in terms of their national seat count. If they only win some 25 out of 78 seats in Quebec, that puts them at a big disadvantage when the Conservatives can win 50 out of 62 seats in Alberta, Saskatchewan, and Manitoba.

Quick note on the provincial scene, rather insignificant considering the next election is four years away and the Parti Québécois is leaderless: the Liberals still lead with 40%, followed by the CAQ at 27% and the rudderless PQ at just 20%. The PQ is even running in third among francophones (24%), behind the CAQ at 32% and the Liberals at 29%.

Léger's poll included their quarterly 'barometer' of personal approval ratings for various federal and provincial politicians in Quebec. Among the federal figures, Mulcair finished head and shoulders above the others with 57% of Quebecers holding a good opinion of him, while just 12% held a bad opinion of the NDP leader. Another 17% were unsure, and 14% said they did not know who he was.

Next on the list was Trudeau, with a 42% to 36% split, and just 6% not knowing who he was. These numbers, for both Trudeau and Mulcair, are generally unchanged since Léger's December 2013 survey.

Stephen Harper's numbers were very low, with just 20% holding a good opinion of him but 68% holding a bad opinion. Elizabeth May had positive numbers, with a 24% to 10% split, but 24% did not know how they felt about the Green Party leader and 42% did not know who she was.

If we remove the undecideds and don't-knows for the three main leaders, Mulcair has a glowing 83% approval rating, with Trudeau at 54% and Harper at a woeful 23%. For the time being, that is even lower than Beaulieu's 33%, though many people have yet to form an opinion of him (early indications are it won't be positive when they do).

It is interesting to look at the aggregate ratings of the federal figures listed by Léger. The Liberals come out on top in terms of approval ratings and recognition, but this is due to the high profile nature of the three names listed by Léger: Trudeau, Marc Garneau, and Stéphane Dion (they average 36% approval, 29% disapproval, 35% don't-knows/undecideds). Their total net score, however, is only +20. This is compared to the total net score of +63 for the four New Democrats listed (Mulcair, Alexandre Boulerice, Françoise Boivin, and Ruth Ellen Brousseau). Together, they average 25% approval, 9% disapproval, but also 67% don't-knows/undecideds. This suggests that, apart from Mulcair, the NDP still has a lot of work to do to introduce Quebecers to their NDP MPs.

The four Conservatives (Harper, Bernier, Christian Paradis, and Steven Blaney) totaled a net -83 rating, averaging just 16% approval, 36% disapproval, and 49% don't-knows/undecideds. It should be worrying for the Tories that their highest profile Quebec MP (perhaps despite their best efforts), Bernier, has such high negative ratings. It would have been interesting if Léger had included Denis Lebel, the Conservatives' actual top Quebec MP, in their listings.

It will make no headlines that the Conservatives are doing poorly in Quebec, and will be lucky to hold on to the seats they have there in 2015. But it is interesting to see the Liberals and New Democrats running such a close race (no turnout advantage to be had - the two parties were also tied among Quebecers 45 or older).

On the one hand, the NDP has an incumbency edge, but also a lack of profile for their incumbents. On the other hand, the Liberals have some more high profile Quebec MPs, but very few incumbents (and those they have were never going to be in danger of being toppled). Both Mulcair and Trudeau have good approval ratings, particularly Mulcair, but Trudeau has relatively high negatives as well. There is good scope for both significant Liberal gains in the province and wide retention rates by the NDP. Quebec will definitely be a battleground in 2015, but the importance of the seats won in Quebec will be determined in large part by how the election goes in the rest of the country.
Posted by Éric at 10:30:00 AM