After two polls at the end of last week gave a narrow lead to the Progressive Conservatives (or a wide one, if only looking at likely voters), the two latest polls now give the Liberals a lead, and a somewhat wider one than the Tories had previously enjoyed. It may be confusing, but this is what a close race with a disengaged electorate looks like.

The Liberals have also moved ahead in the seat count, with a 10-seat gain to 47, or between 41 and 54. The PCs slipped six seats to 43 (or between 37 and 48) while the NDP was down four seats to 17 (or between 14 and 21). The likely projection is thus a minority Liberal government, though a majority is just possible and a PC plurality is also in the cards. It remains very close, and even small variations in support can swing a few seats. 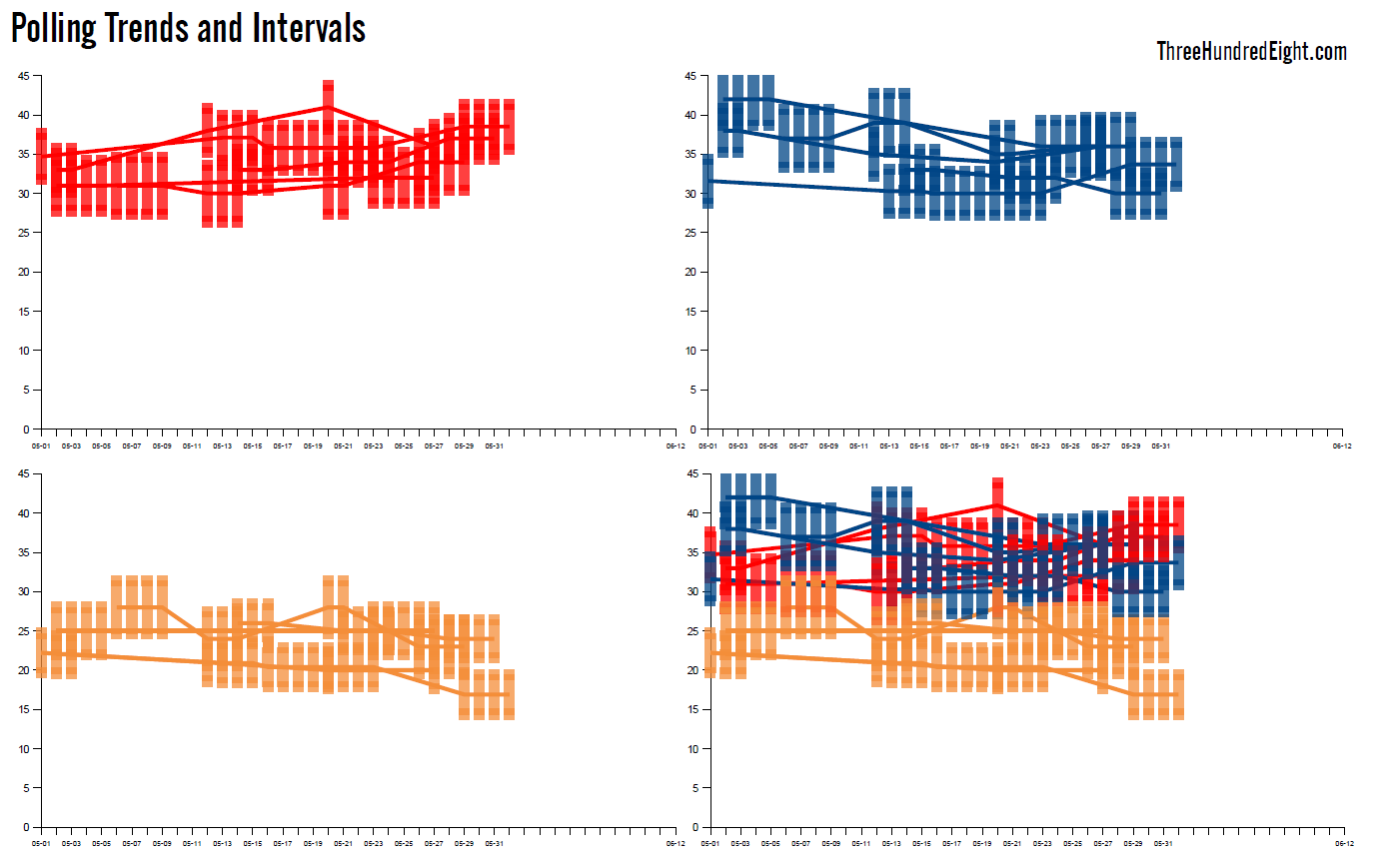 The chart above, which represents each day a poll was in the field, the confidence intervals of those polls, and the trend lines of each individual pollster, suggests the Liberals may be on the upswing at this stage of the campaign, while the Tories, after a mid-point slump, have settled in. The NDP could be holding steady or dropping. 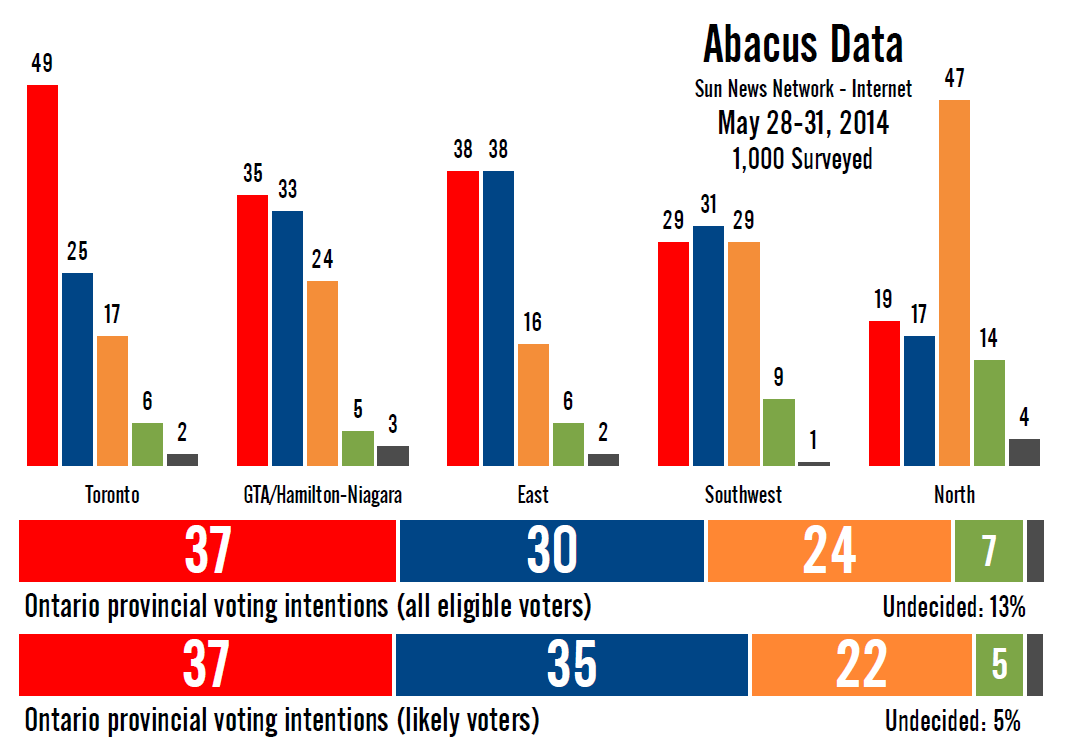 Though the poll-to-poll shift from Abacus's last survey of May 21-24 is within the margin of error (of a probabilistic sample of similar size), the trendlines are moving towards the Liberals. They were up three points to 37%, the second consecutive poll from Abacus in which the Liberals have been picking up steam. Both the Tories and NDP have been dropping in two consecutive polls, this time down two points to 30% for the PCs and one point to 24% for the NDP.

The Greens had 7% support, up one point, while undecideds were down two points to 13%.

The only regional shift worth noting was a 10-point gain for the Liberals in Toronto, where they led with 49%. They were also in front in the GTA/Hamilton-Niagara region with 35%, and were tied with the PCs in eastern Ontario with 38%. The PCs were narrowly ahead in the southwest with 31%, while the NDP was well ahead in the north with 47%. 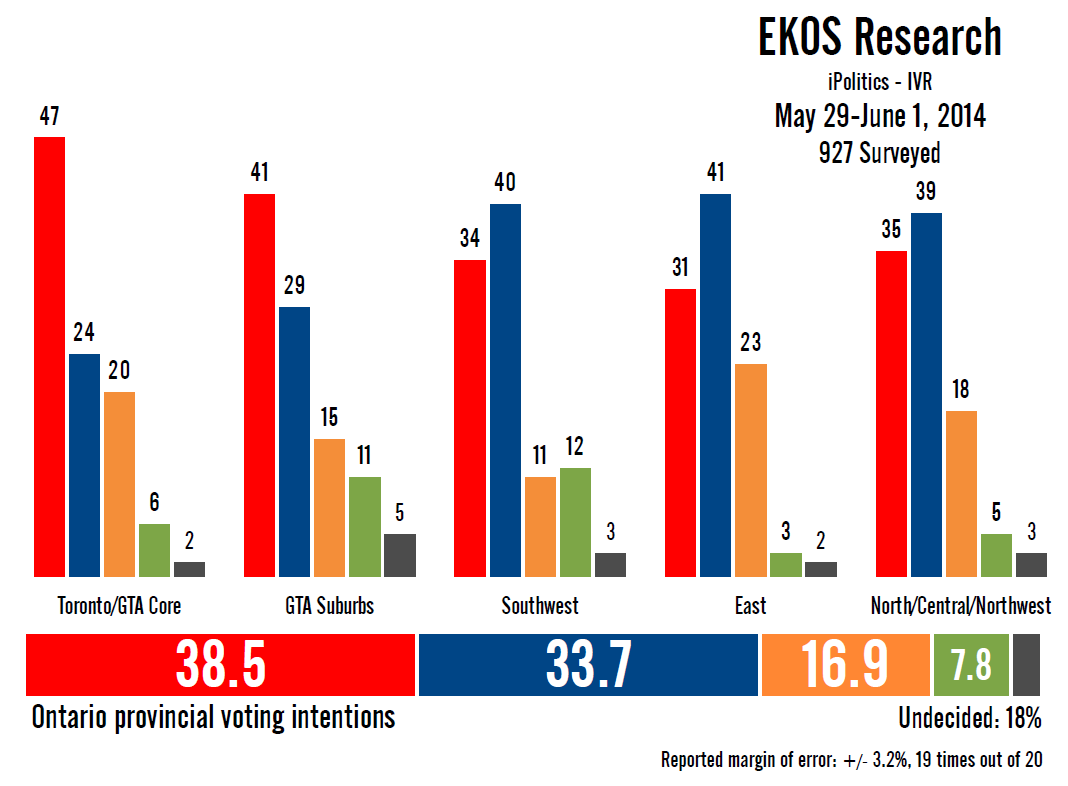 The EKOS poll also pointed to a Liberal victory, with the party up 2.7 points to 38.5% from the last survey. The PCs were down 3.7 points to 33.7%, while the NDP was down 3.5 points to just 16.9%, the fourth consecutive drop in EKOS's polling. That is a very low score for the NDP, however, and must be at the low end of the margin of error.

None of these shifts were statistically significant, though the sustained weakening of the NDP is worth noting.

EKOS is supposed to publish its likely voter estimates today, and will be reporting on a daily basis going forward. We can probably expect the likely voter numbers to boost the PCs, as the margin between the two parties shrank to one point among 45-64 year olds (36% to 35%) and flipped to a four-point edge for the Tories among voters 65 or older (40% to 36%).

The only regional shift outside the margin of error was in southwest Ontario, where the Tories were up 9.6 points to 39.6% and the NDP was down 10.2 points to 11.2%. That seems like a very anomalous result, as the southwest has been one of the strongest polling areas for the NDP. Also, it puts them just behind the Greens, and Abacus (using the same definition for the region and polling over most of the same period) put the three parties in a tie with around 30% support.

Elsewhere, the Liberals led with 47% in Toronto and 41% in the GTA suburbs, while the Tories were ahead in eastern Ontario with 41% and the north/central part of the province with 39%.

The Abacus and EKOS polls were quite similar in Toronto, the other region where their definitions are identical. The numbers themselves were broadly the same, considering the sample size, at 47% to 49% for the OLP, 24% to 25% for the PCs, and 17% to 20% for the NDP. The trends were also heading in the same direction, with the Liberals gaining and both the NDP and PCs slipping.

So, the stage is set for tonight's debate. Both Kathleen Wynne and Tim Hudak have a lot riding on it, as with the race as close as it is a good or bad performance could break the deadlock. For Andrea Horwath, she needs to finally build some momentum as only nine days remain before the vote.
Posted by Éric at 11:15:00 AM